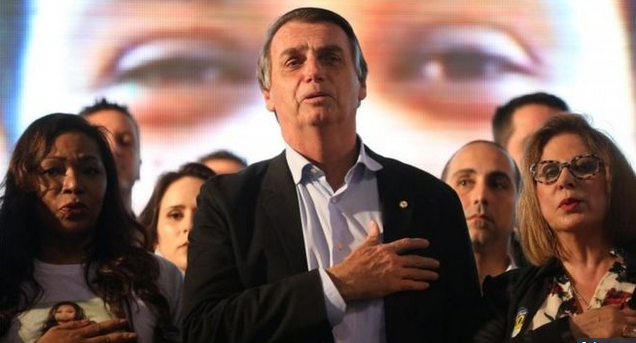 According to the ABC, women despise Jair Bolsonaro.

The news out of South America is that Jair Bolsonaro, inevitably described by Their ABC as “far right”, has achieved 56% of the vote and will romp into Brazil’s presidency. This might come as a surprise to Radio National listeners recently treated to the perspective of New York-based freelancer Cleuci De Oliveira, who told hostess Fran Kelly how the sisterhood in her native land was revolting against, yes, the “far right” and “fringe” Bolsonaro. While briefly conceding Bolsonaro was the front-runner, that interview painted a rather different profile of the Brazilian electorate than that now etched in stone at the ballot box.

Quadrant Online readers knew better, thanks to Augusto Zimmerman’s recent essay, which noted that it was not Bolsonaro’s Trump-like disdain for good manners and the Left’s fashionable causes driving his appeal but the possibility that he might actually do something about the endemic crime and corruption which has laid the country low:

Bolsonaro has always been labelled ‘far right’ by the Brazilian media. This is a label usually given to anyone who opposes such things as the radical feminist lobby and/or the LGBTQI agenda. Bolsonaro apparently is very ‘far right’ because he also sees a few positive aspects in the military regime that ruled over the country from the mid-1960s to the mid-1980s. Above all, he is called a ‘fascist’ because he wishes to fight crime and to introduce policies that can somehow address the breakdown of law and order in Brazil.  … Bolsonaro is deeply hated by those who reject his correlation between the rampant levels of criminality and the disorder caused by the incapacity of successive left-wing governments to protect the people from dangerous criminals.

While the current democratic period was initially hailed as the commencement of a new era of human rights, Brazil has faced an explosion of crime and violence over the last three decades. From 1985 (the last year of the military regime) to 2018, the number of Brazilians murdered as a result of criminal activity has grown by 257%. Homicide is currently the major cause (58%) of early death for Brazilians.

Australians are obliged to pay for the ABC’s exercises in wishful thinking and selective sympathies. Quadrant costs only the price of a subscription. Follow this link or the one below to gain instant access to each edition.