All parents – good parents, that is – know a consequence of allowing naughtiness to go unpunished is more naughtiness. It is logic that appears lost on the ABC, where den mother Michelle Guthrie, who bills herself as “editor in chief”, is charged to preside over the kiddies in the national broadcaster’s newsroom cubbyhouse. That would be the one with Only Leftists Allowed written over the front door.

Take Radio National’s Jonathan Green as an example of how bad behaviour not only goes unpunished at the ABC but grows worse and more blatant over time.

Some years ago Mr Green was spared official rebuke, although not widespread ridicule, for putting The Drum, which he then supervised, at the disposal of a hoaxer going by the improbable name of Alene Composta. His mischievous correspondent offered an unsolicited and entirely ridiculous essay that accused NSW Liberals of using an obscene and sexist term to denigrate NSW’s then-Premier Kristine Keneally, at that time contesting the election her government would go on to lose. In the course of their preliminary correspondence the parodic Ms Composta wrote (emphasis added)

It seems to be that if we can link the Liberals to this crotch talk then there is still a chance we can nudge the election toward Labor, or at least do something to limit what looks like it will be catastrophic damage inflicted by voters … The important thing is that we do everything we can, use every tool we know, to help Kristina out of the jam some silly moves and a lot of Murdoch venom has put her in.

Green snapped it up faster than Pavlov’s dog could generate a stream of drool and an absurdist parody specifically pitched to recruit the ABC’s help in nudging “the election toward Labor” was duly posted, albeit briefly. The full saga was timelined by blogger and Quadrant columnist Tim Blair and, if your name is not Jonathan Green, it still makes amusing reading.

As to Green’s ABC career, there were no adverse consequences. Soon, he was promoted to sit behind a microphone at Radio National. Beyond his Southbank roost, Green also assumed the editorship of Meanjin, where he publishes blog posts like this one, which argues that, when yet another 7/11 is robbed by a youth of African appearance, responsible reporting demands the bandit by described only by his lack of footwear.

This is a sentiment Green endorses in his prolific Twitter feed, which also suggests that the partisan deployment of the public broadcaster’s taxpayer-funded resources to attack Labor’s foes remains undiminished.

Click the image atop this post to enlarge Green’s expletive-garnished thoughts on Liberal Minister Craig Kelly or follow this link to see it in its original context.

A momentary lapse of judgment? One gathers not.

Subsequently criticised by a fellow tweeter for “radical intolerance by @abcnews staffer @GreenJ today. Attacking an Australian Government minister with abusive and filthy language, purely because of a differing political opinion”, Green retweeted that criticism for all the world to see with a defiantly ironic “OMG”.  The “B’ in ABC must stand for “brazen”. 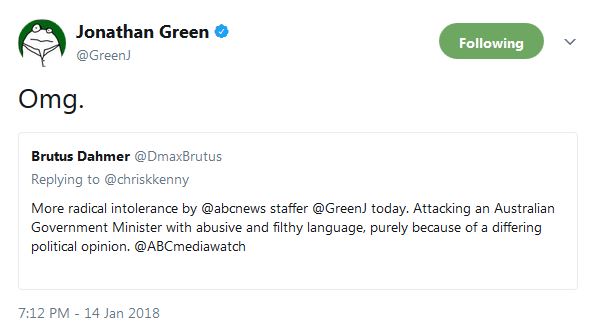 Jonathan Green, that very model of a modern ABC employee, can be followed on Twitter via this link or the one below. Those few who wonder how and why the national broadcaster continues to exist as an hour-by-hour refutation of its chartered obligation to report news with a straight bat will soon have their ignorance dispelled, one tweet at a time.