The Very First Cut Of All 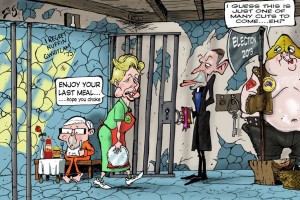 To the very end the condemned man made his grand plans, prattling of fast trains to gay weddings, moving naval bases about the geography of a deluded imagination and mumbling small, quiet pledges to keep Vegemite affordable and every sauce bottle ready for a fair shake. Then came the heavy tread of footsteps outside his […]

Cartoonist Zeg on the Bolt Trial.