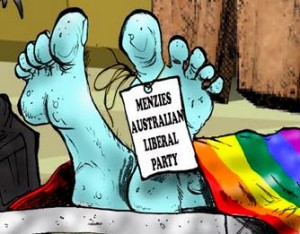 The party of Menzies now stands for what exactly? Don't answer because it's a trick question: the Liberals' ruling clique stands for nothing that Labor and the Greens don't do a better job of representing. From its ruinous advocacy of "renewables" to the appointment to the ABC board of a chairman who insists the national broadcaster is the very essence of impartial truth, the one thing Turnbull & Co have mastered is betrayal

It is nice to know the eager and dedicated public servants in the Australian Taxation Office are working tirelessly to bring in the revenue so desperately needed to fund such worthwhile undertakings as the Australia Council, a fleet of overly expensive South Australian submarines and ARC-grant nest-featherers, not to mention the ever-ludicrous Gillian Triggs and her HRC grievance-mongers. Still, even the most conscientious stewards of the public good can blot their copy books from time to time. Zeg extends his sympathies and suggests how the ATOs embarrassing little problems might best be handled in future ... 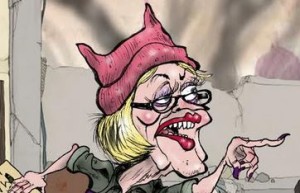 It's a hard life being a feminist icon of the Left and needing to chart a safe course between the Scylla of demands for universal equality and the Charybdis of identity politics. The first, you'd imagine, demands ardent denunciations of a creed that has misogyny woven into its very fabric. Ah, but that could get the likes of Yassmin Abdel-Magied and Susan Carland offside and might jeopardise invitations to writers festivals and the like. So best to remain silent, which appears to be the sainted Anne Summers policy, given that any search of her hallowed works turns up very few references to the Islamic oppression of women. Were she ever to pick a side, Zeg imagines it would go something like this.... 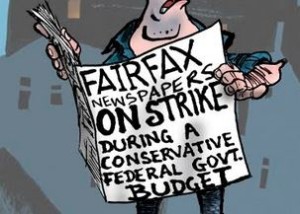 It must be a hard call for Fairfax Media's striking editorial workforce. Their employer is in all sorts of financial trouble, so naturally they wish to make things even worse by withdrawing their labour for a week. Yet the Budget is at hand, when all dutiful groupthinkers are obliged to pontificate about the Coalition's indifference to climate change, the lack of funding for bicycle-seat research and all the other picayune passions that animate your typical Age or SMH reporter.

Still as Zeg observes, there are even stranger things in this world than a fairfax newsroom.

Changes to immigration policies will see candidates for Australian citizenship asked if they approve of genitally mutilating little girls. Good question, although it does not go quite far enough, as it neglects to inquire about support for penis-tucking, which gets a certain kind of "educator" very excited indeed. NSW politicians don't share the enthusiasm, which is why Safe Schools has been given the chop. But not to worry, you instructors in gender fluidity, no one is reforming the tertiary sector.

Go With the Flow

Islamic extremism excused by people who should know better. Ayaan Hirsi-Aly warned off. Power bills soaring as a clique of the compliant enforces subsidies for green rent-seekers while industries go to the wall and domestic power bills soar. Australian kids who never quite learn how to spell but know all about penis-tucking. Hey, why worry about the future? Just lean back and enjoy the ride 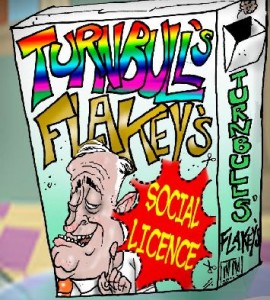 Our Prime Minister recently lectured gas producers about their "social licence", although it would be a fair bet that few of those present had a clue what he was talking about. Nevertheless, it seems that just such a document is needed in order to tap Australia's vast energy reserves and take to market a commodity that politicians -- like the green-minded Malcolm Turnbull, for instance -- have distorted to the point where blackouts are increasingly common and captains of industry talk of pulling up stumps and moving their operations to countries where a greater degree of sanity prevails. To help gas producers obtain that social licence, Zeg has a suggestion. All they will need is a cereal box and a pair of scissors. 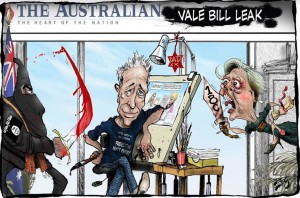 Bill Leak was forced to move his home and family to a secret location after being marked for death by Islamic fascists -- real fascists, mind you, not the sort the sniveling Left perceives at every word of disagreement.

He should have been able to count on the full weight and support of every government agency and bureaucrat. Instead, while the Prime Minister declined to utter four short words, 'Je suis Bill Leak', he was abandoned to the torments of the shameless Gillian Triggs and her posse of tax-funded thugs.

What's the difference between ISIS and the HRC?

There has been much criticism of late in regard to the $5 million-plus salary pocketed by Australia Post's Ahmed Fahour, with critics noting that he is paid ten times more than our Prime Minister. That gripe is most unfair. Fahour's minions actually manage, most of the time, to deliver things of worth and value. The same cannot be said of Malcolm Turnbull

The nation has its problems, no doubt about it: budget shortfalls, an immigration program conceived as a make-work policy for CentreLink staffers, cities plunged into darkness. And what occupies the prime ministerial mind? Why, gabbing about a republic with his favourite hanky-headed columnist!