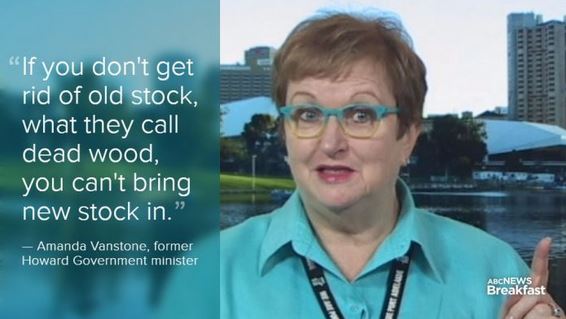 Could it be that Amanda Vanstone’s contract with the ABC, where as the token, er, “conservative” she comperes RN’s token Counterpoint, is up for renewal? At such moments it is always best to make sure patrons know you are thoroughly presentable and can be relied upon. It happens everywhere, even in Rupert Murdoch’s far-flung dominions, where anxious editors have been known to devote their energies to getting their newsrooms clean and shipshape upon learning that The Boss is about to pay a flying visit, even to having the pot plants meticulously dusted.

Perhaps to impress the national broadcaster with her soundness and shiny reliability, Vanstone today uses her column in the Fairfax press to announce that she is thoroughly in accord with the national broadcaster’s disdain for Tony Abbott. By her reckoning he should pack his things and depart Canberra forever. Indeed, no sooner had her thoughts gone to press than the ABC had her amplify them on its Breakfast TV show, then whipped up the fetching graphic reproduced atop this post and featured it prominently above a related report quoting Mathias Cormann as saying, basically, that Vanstone is raving in arguing that an Abbott exit would be for his own good, don’t you know (emphasis added):

Friends, perhaps out of misplaced loyalty, will be whispering unwise counsel in his ear: “You could have won”, “You weren’t given long enough” and any number of other platitudes born out of ignorance and bathed in fantasy. No one wants to embrace the reality that their demise was all their own work. So-called friends will be feeding their own resentment rather than genuinely putting Abbott’s welfare first.

Rupert’s editors should be so blessed. This ABC pot plant polishes itself.

Vanstone’s column, which includes the remarkable assertion that Abbott’s presence will inhibit Liberal  rank-and-filers volunteering to hand out how-to-votes, can be read in full via the link below. News of the 12.8% swing in North Sydney against the latest PM’s government must not have penetrated her ABC bubble, nor those whispers of the local branch’s purported problems in recruiting election day volunteers.

Apparently, if Abbott goes, there will be no dissension in a party of happy and contented Turnbullians.

Your April Quadrant
now on sale