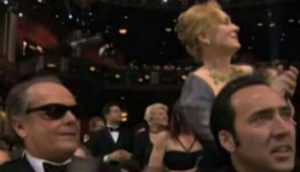 It was difficult yesterday to avoid footage of that heartfelt thespian Meryl Streep giving Donald Trump the rounds of the kitchen for humiliating on November 8 the woman for whom she served as a warm-up act at the 2016 Democratic Convention. You can watch the full measure of her passionate Hillaryphillia at this link. Apparently Mrs Clinton’s XX chromosomes were all the recommendation anyone could need to put her in the White House.

The ABC and Fairfax gave Streep’s Golden Globes address much prominence, which was no less surprising than their omission of an explanatory paragraph or two putting into context Streep’s absurd claim that Hollywood might soon be purged of foreigners by presidential edict. If those creative aliens lack green cards and slipped undocumented across US borders, yes, that might well be the case, but it is a safe bet that Tinseltown’s  directors, costumers and the like are fully and properly credentialled, unlikely to be dragged at midnight from their beds. Unless Peter Weir entered the US under the guidance of a people-smuggling ‘coyote’, he can probably rest easy.

Also not mentioned was the broadening of Streep’s enthusiasm for sex offenders, which now extends to their enablers.

Back in 2003, she prompted a standing ovation at the Oscars for convicted child molester Roman Polanski. That’s her above, rocketing to her feet above Jack Nicholson and Nicholas Cage as the fugitive from justice was announced the winner of the Best Picture award for The Pianist. At yesterday’s Golden Globes, the object of her affection was the woman who led and directed the campaign of smear and harassment against the female victims variously used and abused by her priapic husband.

How is it that media organisations, ostensibly dedicated to the exposition of truth, neglect such pertinent context? At the link below, US columnist Rod Dreher delivers a brilliant essay on groupthink newsrooms and the insular arrogance of their twisted, pretzel logic. The hook for his thoughts is the US mainstream media’s attempts to re-cast the kidnapping and torture of a retarded man in Chicago by four vile black racists. His captors’ anti-white sentiments had nothing to do with the incident, according to the New York Times. No, none of that. It was actually a manifestation of prejudice against … wait for it … the disabled!

Tangled in its lies and omissions, the mainstream media is drowning in red ink and reader rejection.