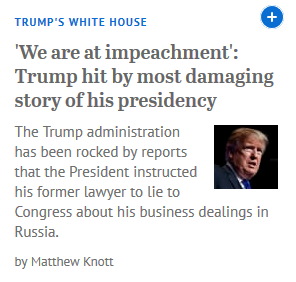 There’s a newsroom term, “re-topping”, which means changing the first few paragraphs to include the latest facts and, as inky sorts say, “advance the story.” Yesterday’s big yarn, just now being re-topped all over the world, was a beaut: according to Buzzfeed, the outlet which first aired the confected Trump-Russiagate dossier compiled by a Washington lobbying outfit paid by Hillary’s Clinton’s presidential campaign, “two sources” had confirmed that Donald Trump instructed former attorney Michael Cohen to lie under oath. This information was said to be in special counsel Mueller’s hands and would likely lead to the president’s impeachment.

If you are inclined to believe Mr Trump is the spawn of Satan and takes his riding instructions directly from the Kremlin, it was a bombshell. At the ABC, where there are no conservatives nor, apparently, experienced senior editors to restrain the leftist gusto of a groupthink newsroom, it became the day’s big story.

The same confirmation bias was also evident at the former Fairfax comics, now part of Nine, where early on Saturday afternoon the headline and blurb reproduced atop this post continued to preside over the home page.

Trouble is, the story wasn’t true and the source denying it was no less that Mueller himself, which suggests the Buzzfeed report was very, very wrong indeed. Throughout the so-called Russiagate investigation, Team Mueller has maintained a near-monastic silence on the progress or otherwise of its diggings and delvings. That it broke that silence to refute Buzzfeed’s bogus scoop is an indictment in itself.

How did the ABC and Fairfax react to the denial of the story they loved so much, a denial which first hit the wires in the wee hours of Saturday morning?

At the ABC, the initial report was re-topped, eventually, with word of Mueller’s disavowal. After that, the original story, with its references to “bombshells”, quotes from foaming Trump critics and charting of what readers were led to believe was the path to near-certain impeachment, well that was allowed to stand. It is almost as if some news-editing backbencher decided the old and wrong story was just too good to take down and spike, which is what should happen to reports that simply aren’t true. Unless there is an outbreak of old-fashioned journalistic rigour at the ABC, that bizarre re-topped blend of opening paragraphs denying everything follows, and at great length, can still be read here.

Well, low as standards are the ABC, the Madame Defarge-style relish at the prospect of Trump being loaded into the tumbril continued to stand as written by Crikey! alumni Matthew Knott, who has been burnishing his credentials as a priest in journalism’s alleged temple of truth at Columbia University’s J-School.

One might hope such an august institution would address how a correct and accurate re-topping might be accomplished. One could also hope that a story sourced from a disreputable and habitually wrong organ such as Buzzfeed might prompt the notion that a better, honest story needed to be written — one that sets the record straight and explains how gross and partisan inaccuracies came to be presented as straight-bat gospel.

Labouring under
a misconception