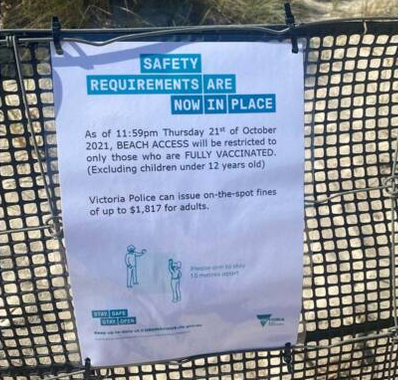 In the wee hours of Wednesday (Oct 20) in Melbourne, some wag placed the notice pictured above at the entrance to Seaford Beach, a pleasant spot on the eastern side of Port Phillip. Prior to March, 2019, when the pandemic’s initial symptom, utter and all-consuming madness, made itself apparent, the first of the morning’s shore-front strollers would have seen it, torn it down, muttered ‘Kids!’ and continued on their way.

Instead, in the Melbourne that Dan Andrews has created — no, ‘destroyed’ is the correct term — consternation erupted. At that morning’s fear-porn news conference, reporters asked if Victoria Police would actually be enforcing such an order. And this being Dan Andrews’ state, where insane and frequently contradictory edicts pour forth from Spring Street in daily profusion (churches closed; brothels open), none of the assembled officials or cabinet ministers was prepared to hazard a definite view of its authenticity. It was only later, when the Health Department noted that the sign’s body copy should have been in green that it was confirmed as a hoax.

That such a jape was taken seriously owes everything to Andrews, who only the day before had been in full you-will-obey mode, stating for the record that come next April, when (if) the Grand Prix transforms the road around Albert Park Lake into a speedway, those not double-jabbed won’t be permitted to attend. The Premier was in full cry by this stage, soon taking up the matter of booster shots, which he all but directly stated would be a further requirement for full and ongoing Victorian citizenship. What prompted that response was a reporter’s question: would Victoria be following NSW’s lead in maintaining restrictions on the unvaccinated only until December 1?

Just how Andrews imagines he can impose his notions of what is good for the public when, just 180 miles to the north of Melbourne, NSW is taking an entirely different course was never explained. But then nothing is ever genuinely and earnestly explained from above in Victoria these days. The Premier’s beady little eyes swivel behind those square-frame specs, he puffs himself into the very picture of authoritarian tumescence and states the way it is going to be. A month ago, before Dominic Perrotet’s reforms to the NSW ‘roadmap’ forced his hand, Andrews was just as adamant about eliminating the coronavirus, in which fruitless cause he has gutted Melbourne’s CBD, inflicted misery on millions and set the stage for further and perhaps much larger grief when landlords of the city’s now vacant shops, shuttered restaurants and empty office towers are too broke to keep their bankers happy.

Ponder the Premier’s transformation. Not so long ago a mere handful of positive test results was enough to plunge the state into immediate lockdown. Lately there have been as many as 2000+ daily cases, yet he is not only allowing the pubs to open but crowing that it is only his sterling leadership which has made it so. When it comes to lies and sooling Victoria Police on any who questions his will, consistency is an Andrews strong point.

Now it’s vaccine, vaccine, vaccine and more vaccine. This suggests he is orchestrating yet another massive failure even has he prods and pushes Victoria further around the S-bend, as indicated by a new study, released on September 30, which

investigate[s] the relationship between the percentage of population fully vaccinated and new COVID-19 cases across 68 countries and across 2947 counties in the US.

It is a given that none of the recent journalism school grads who take daily stenography at Andrews’ pre-noon fear fests will consult the paper, let alone put a question about it. But Quadrant Online readers can find it here at the US National Institute of Health.