Shorten on the stand 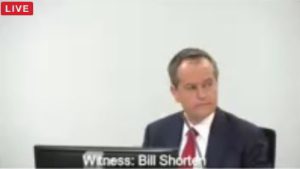 The man who aspires to be the next Prime Minister — no, not Malcolm Turnbull, the Labor guy — is now testifying before the Royal Commission into Trade Union Governance and Corruption.

The Opposition Leader’s turn in the witness box is being streamed live. Click the link below to follow proceedings as they unfold.

ASIDE: The ABC’s News 24 channel — one of those expensive, empire-building innovations in which Managing Director Mark Scott takes so much pride — is also broadcasting Shorten’s various attempts to recall and redefine memories.

Why the duplication? The TURC feed is stable, presumably cheap to stream, and available to all with decent web connections. Scott has been adamant in placing platform above content — why else would he have shut regional news bureaux in order to underwrite further expansions of the national broadcaster’s digital bailiwick?

With apologies to Mr Creosote…