The rule of the tool 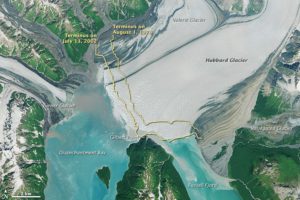 What might be called the Rule of the Tool is always worth bearing in mind: If all you have is a hammer and nothing else, the obvious solution to every  problem, even those that require a screwdriver, will be to administer a good whacking. In the warmist press over recent days, President Obama has demonstrated the wisdom of that insight with his widely reported lament that the blessing of electrical power from every socket, not to mention the freedom conferred by the private use of automobiles, is inflicting a catastrophic melting on the world’s glaciers. To make his point, the world’s most prominent community organiser was shipped briefly to Alaska, where he posed for the cameras before the retreating Exit glacier. “This is as good a signpost of what we’re dealing with when it comes to climate change as just about anything,” he recited.

Now there are two ways of finding a little sunshine in this latest episode of presidential posturing. The first is to recognise that Obama’s jaunt was actually a perverse blessing, as all that posing and preaching kept him too busy to cut any further deals, like his recent nuclear accord with Iran. There are a number of other nations whose sinister goals might have gained from the sort of compliant indifference extended to Tehran’s mullahs, so that’s a definite plus if those lesser outlaw states must wait a little longer for Washington’s permission to pursue their mischief. Small consolation, true, but with this president any action not immediately counterproductive must be regarded as a definite plus.

The second is that, once again, a warmist mouthpiece has indirectly demonstrated the essential shabbiness and shallowness of his message. Yes, the Exit glacier has retreated quite some distance in the past century, which is the factor that telegenically positioned Obama and his TelePrompter amongst those ice-free boulders. Had his handlers directed Air Force One to another Alaskan destination, however, the opportunities for sound-byte alarmism would have been grievously curtailed. That would be the Hubbard glacier, which no less an authority than NASA reports as growing at a prodigious rate, even as the Exit glacier shrinks and others with it. Click here to view an expanded version of the picture atop this item to see just how much it has grown.

This difference — one glacier booming, the other withering — might have been the grist for an informed discussion on the lack of certainty in the disciple that calls itself “climate science”, but the only instruments available to lead such a examination would have been the current president and his talent for overlooking the inconveniently obvious. With the Paris climate confab coming up, this policy of inspired omission will be well worth keeping in mind.

More than that, after what is now very nearly two decades of the climate refusing to cooperate with the alarmists’ hot-house prophecies, pounding the time-worn cliches is pretty much all the green-eyed opponents of growth and prosperity have left. Hammers are dumb, blind instruments. How blessed the warmists must feel to have a spokesman who fits that description to a tee.

The NASA report on the Hubbard glacier can be read in full via the link below.

Douglas Murray on
Greta (and more)