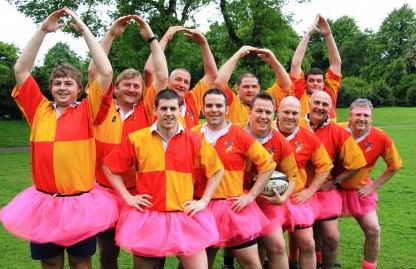 Intolerant Victorians and AFL-besotted residents of other southern states have long suspected that rugby’s  scrums were no better than excuses for beefy men to place their heads between each other’s thighs. Ridiculous, you say? Offensive? Absolutely! Hard to credit, certainly, but perhaps not so improbable now that Melbourne’s Herald Sun has reported a training-session mishap that made a Welshman switch sides and play for the other team.

“I was doing a forward roll down a grass bank one day and cut off the blood supply to my brain,” he told the BBC.

When he regained consciousness, Birch – who was engaged to his girlfriend at the time – found his sexuality had completely altered.

Within a year of his stroke he had quit his job at a bank and become a hairdresser, moved out of his family home in South Wales and started meeting men.

A follow-up story with a local angle is quite probably being developed in a Fairfax or ABC newsroom, where someone must surely have recalled that PM Tony Abbott once played the sport. His unpleasant personality, we may well soon be told,  stems not merely from his Catholicism but also owes something to the suppression of a breakaway tendency.

After Peter Hartcher’s fanciful yarn asserting Abbott ordered Border Force officers to bail up random passers-by on city streets — a claim subsequently qualified by a grovelling apology disguised as a “correction” —  such a tale would be at least as credible.

The story of how a rugby player came to kick with the other foot can be read in full via the link below.

It’s ‘Trump’s America’ at the ABC