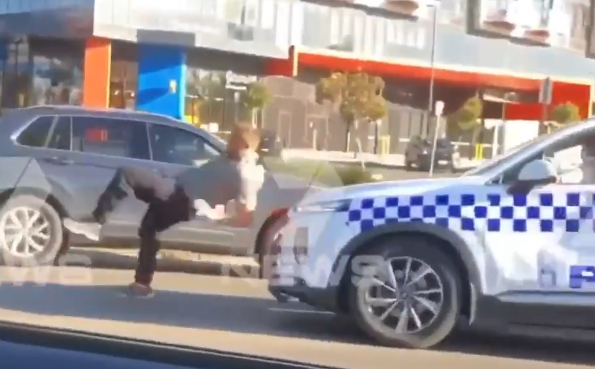 Sir Robert Peel is remembered as the founder of London’s police force, which set the model for upright, community-based policing. Apart from being the reason English police officers are know as ‘Bobbies’, he was also the source of nine guiding principles formulated in 1829 and subsequently adopted by civilised nations across the world.

Nowhere in Peel’s list is it mentioned that the correct way to deal with a mentally disturbed individual is to run him down with a police car, as in the screen grab atop this post, then dish out a hefty dose of pepper spray before stomping on the poor unfortunate’s head.

As of late on Monday afternoon the target of that hit-and-stun attack is in an induced coma while doctors conduct tests for possible brain damage.

The full clip of the latest Victorian to suffer the attentions of Premier Daniel Andrews’ police force can be viewed via Rita Panahi’s tweet at this link. Internal investigators will probably want to look at it too, although this being Victoria you just can’t be too sure.

Another link worth following is 3AW’s on-air interview with the father of the injured man, who explains that his son left a nearby hospital while waiting for a bed. A nurse summoned police — and in two shakes of a truncheon he was flying through the air.

As Chris Carr wrote in Quadrant Online over the weekend, there is cause for grave concern about the moral and ethical standards being observed, all too often in the breach, by Victoria Police. Newly appointed Chief Commissioner Shane Patton might want to share Sir Robert’s nine principles with his underlings. It seems they could use a reminder.

PRINCIPLE 1 The basic mission for which the police exist is to prevent crime and disorder.

PRINCIPLE 2 The ability of the police to perform their duties is dependent upon public approval of police actions.

PRINCIPLE 3 Police must secure the willing cooperation of the public in voluntary observance of the law to be able to secure and maintain the respect of the public.

PRINCIPLE 4 The degree of cooperation of the public that can be secured diminishes proportionately to the necessity of the use of physical force.

PRINCIPLE 5 Police seek and preserve public favor not by catering to the public opinion but by constantly demonstrating absolute impartial service to the law.

PRINCIPLE 6 Police use physical force to the extent necessary to secure observance of the law or to restore order only when the exercise of persuasion, advice and warning is found to be insufficient.

PRINCIPLE 7 Police, at all times, should maintain a relationship with the public that gives reality to the historic tradition that the police are the public and the public are the police; the police being only members of the public who are paid to give full-time attention to duties which are incumbent on every citizen in the interests of community welfare and existence.

PRINCIPLE 8 Police should always direct their action strictly towards their functions and never appear to usurp the powers of the judiciary.

PRINCIPLE 9 The test of police efficiency is the absence of crime and disorder, not the visible evidence of police action in dealing with it.

UPDATE: Police Minister Lisa Neville, who three years ago attempted to charge the promoters of Milo Yiannopoulos’ speaking tour for protecting audiences from a mob of urine-slinging thugs, has claimed to the ABC that the man had committed “quite a violent offence”. Has she seen the video?

And from VicPol there is this:

“…the male allegedly became aggressive and damaged a police vehicle whilst attempting to avoid arrest,” the spokeswoman said.

“During the highly dynamic incident a police officer was assaulted and OC spray was deployed before the 32-year-old man, of no fixed address, was arrested and subsequently taken to hospital for assessment.”

Drowned in a good cause