Bizarro World on the Yarra 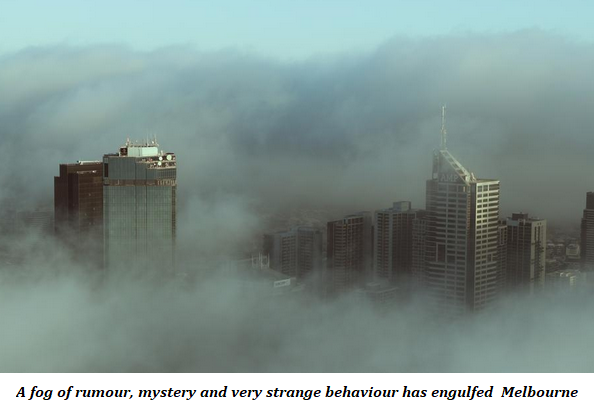 It’s ridiculous, the kind of impossible rumours that circulate all around social media. Everyone enjoys a bit of gossip now and then but don’t people have anything better to do than make up these stories? Such improbable stories too, no one should give them a moment’s credence. There’s a particularly unconvincing one doing the rounds in Victoria just now. The thrust of it – and it just shows what nasty minds some people have – is that a senior Labor politician (I won’t name him but the rumour does) who has been unwell lately is in that condition because he was ‘beaten up’ in a fist fight.

What could be more absurdly untrue than that? Apart from anything else, we all know Labor politicians are pillars of rectitude – they don’t go around getting into fights. True, the putative attacker also gets named on social media but not by me, though that proves nothing. But what makes the story completely unbelievable, indeed malicious, is that the casus belli is said to be that the senior Labor politician was caught acting, let us say inappropriately, towards an attractive younger female having some connection with the purported flinger of fists.

How could that be true when we know that Labor politicians, indeed all Labor and leftist males, are impeccable in their relations with women? Aren’t they always telling us so? Don’t they spend vast sums of taxpayers’ money exhorting the rest of us to “respect” what used to be called the fairer sex? Don’t they constantly suggest that it’s right-wing ‘sexists’ like Donald Trump, Hollywood moguls, even some MPs on the non-Labor side, who are the offenders in this regard  — the kind of people whose wrong attitude to women is a consequence of the terrible patriarchal power that some men (not leftist ones, who have never been guilty in this regard) have traditionally arrogated to themselves and that only now, thanks to courageous feminists, is slipping from their grasp? Male Labor MPs and leftists in general, on the other hand, high on their moral rostrum, are exemplars of gallantry – well no, they don’t say that because feminists don’t like the word – but they are pillars of respect for women, of courteous and civilised behaviour.

Why, believe that leftists are capable of acting otherwise and the next thing will be some rumour-monger putting it about that a leftist can also be “homophobic” or “racist”. Imagine! But hang on, perhaps you don’t have to imagine. Hasn’t a Greens lady councillor been in hot water for abusing gays at a night club? Hasn’t this woman, Anab Mohamud, of Victoria’s Yarra City Council, been accused of “vowing” to “make sure all these faggots” – the club’s patrons presumably – “die”? And as if that’s not bad enough, isn’t it said that she played the race (or religion) card by shouting, as so many of her co-religionists do when upset, “Allahu Akbar!”? No wonder the clientele was all of a doo-dah. Too often those words have preceded a beheading or a bomb attack. As to Anab being a Green, I wondered if the report had got it wrong and, if she did use that kind of language about gay people, whether she wasn’t a fundamentalist Christian who represents Australia First on the council. But no, it was in the Melbourne Age that she was a Green so it must be true. (And I bet having to report it was ashes in the mouth of the editorial staff.)

Indeed, “homophobia” and non-conservative politician are no more strangers to each other than they were with the white right-wing “poofter-bashers” of yesteryear (some of whom were to be found in the ranks of the police before the force became all socially aware). Was it not, for instance, an Oscar-standard display of this prejudice when the esteemed Tasmanian senator Jacqui Lambie, thwarted at an airport because she wasn’t given the instant access to the Chairman’s Lounge she considered her importance deserved, said some rather disobliging things about Qantas, its staff and its management? She was even heard to yell out that Mr Joyce, the airline’s distinguished chief executive, “is a poof”. That may not have come as news to many people, but it’s not the thing you scream at the top of your voice if you have pretensions to being a caring, sensitive individual.

Rumour – “fake news” as it’s now called – thrives when facts are scarce, and in the state of Victoria all sorts of facts are in short supply just now. Like what are the scientific facts that have supposedly justified more than 200 days of lockdown so far, with a cost to businesses and livelihoods unparalleled in the rest of Australia? Or how come more than 90 per cent of the national total of COVID-related deaths have been in Victoria? And who was really responsible for the various blunders in Victoria’s sieve-like quarantine arrangements that let the Peking Pestilence waft out into the community? (There was a kind of half-hearted “inquiry” into this, but it was never intended to hold anyone in government or in Victoria’s hydropic bureaucracy to serious account.)

There is also a shortage of facts around the big empty space at the centre of Victoria’s government.

The Premier has been away from his office since early March. He is unwell, he hurt himself badly falling down some stairs. That’s his story and he’s sticking to it. But when a member of the state opposition – Louise Staley, the shadow treasurer – asked in parliament for more evidence of this, and suggested that there might be a “cover-up” about the Premier’s indisposition, the heavens fell. His media monkeys – he has hordes of them, far more than the Prime Minister – set up a defensive chatter. How dare she attribute a conspiracy to a government as honest and transparent as Victoria’s! But she wasn’t attributing anything, simply asking questions – questions, said an ABC reporter with characteristic obtuseness, that were “madness at a time when the state is in a fourth lockdown”, though surely that would only make them more pertinent. Martin Pakula, one of the government’s less articulate ministers – and there’s some tough competition – summoned all the resources of his scathing oratorical invective to accuse Louise Staley of being “Trumpian”. Ouch. What could be more damning than that?

Yet she was onto something. If a government, or any authority, won’t tell the truth to the electorate, and demonstrate that it is telling the truth, rumour will flourish. Whether you believe it or not is another matter.

Bizarro World on the Yarra