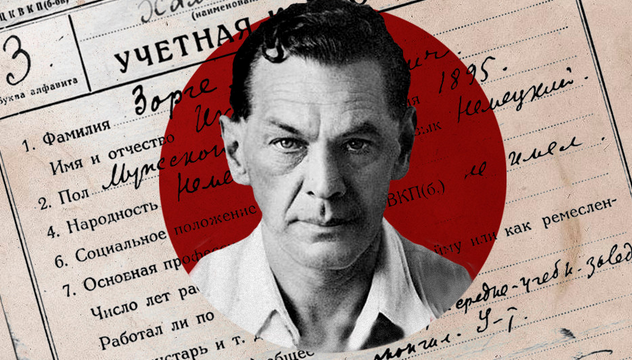 I’ve been reading Owen Matthew’s new biography of Rotary Club stalwart Richard Sorge, the German communist spy in Tokyo. It’s called An Impeccable Spy: Richard Sorge, Stalin’s Master Agent. Sorge tipped off Stalin on Setember 14, 1941, that Japan would not invade from Manchuria. Stalin could then swing forces from Siberia to the west — 15 infantry divisions, three cavalry divisions, 1500 tanks and 1700 aircraft to push the Germans back from Moscow.

Stalin had earlier ignored as ‘provocation’ Sorge’s excellent detail about Hitler’s Barbarossa invasion planning. With a red wax pencil, Stalin scrawled on Sorge’s May 20 report that the author was “a shit who ran small factories and brothels”, mistaking Sorge for a different spy.

Sorge betrayed all parties except his Russian spymasters and a lover or two. He was himself betrayed even by his long-standing radio man in Tokyo, Max Clausen, who through resentment and laziness for two years truncated or never transmitted many of Sorge’s priceless reports on Japan’s war planning. Sorge  on 22 August, 1941, gave Clausen this message to send: “Green Bottle [the Japanese Navy] and the government have decided not to launch a war [against Russia] in the course of this year.” Clausen put it in the bin, unsent.

The Japanese in October 1941 finally figured out what secrets Sorge was accessing as a honorary Nazi member of the German embassy in Tokyo. After two years of interrogation, they hanged him in November 1944. Moscow had never lifted a finger to help him, despite some previous successful exchanges of minor spies. 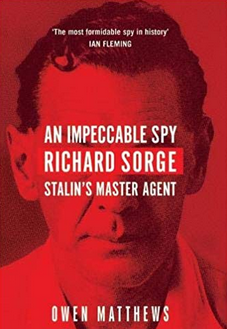 My motive for writing about Sorge is actually because he was a Rotarian. So am I. I’ve been going to weekly Rotary meetings in Melbourne for about 30 years. It’s been nice hearing good speakers, mixing with diverse colleagues and helping with a bit of charity work.

I’ve never seen Sorge’s name on any list of famous Rotarians. The lists range from flight pioneer Orville Wright (Rotary Club of Dayton Ohio ) to Charles Lindberg and the first man on the moon, Neil Armstrong, (RC Wapakoneta, Ohio). Next time you buy a Hallmark card for your mother-in-law, be aware that Hallmark founder Joyce C. Hall was with RC Kansas City.

Worldwide, Rotary from 1988 was the main player in the global eradication of polio, through grassroots delivery of oral vaccinations to 2.5 billion children. Last year new polio cases involved only 33 children in horribly-administered regions such as Afghanistan and Nigeria. The World Health Organization estimates that the polio drive has saved 1.5 million children’s lives and 16 million people from a crippled lifetime.

The Rotary drive was never all sweetness and light. For example, the Taliban has murdered distributors as supposed Western agents. Right from the start Rotary locked horns with irascible oral vaccine pioneer Albert Sabin. A little surprisingly, Rotary’s bureaucracy ran the campaigning better than Sabin’s radical methods did. These days, with Bill Gates and Warren Buffett swamping the charity circuit, Rotary’s $US1 billion-plus polio fund-raising and mobilisation is seldom mentioned by the media.

Thanks for your patience during that commercial, and now back to Richard Sorge. In 450 pages of the biography, Sorge’s Rotary career merits just nine words. His major spy career started in 1930 in Shanghai, a city aptly known as ‘the whore of the Orient’. Sorge used his job as journalist to keep tabs for Moscow on Japanese ambitions and the wars between Chinese nationalists and communist forces. “The letters of introduction from Berlin established his bona fides with the German consul-general, and with his help Sorge joined the Shanghai Rotary Club,” Matthews writes. Remarkably, the club’s roll of 105 members at July 1, 1930 survives. Sorge’s not on it – he must have joined in late 1930.

Members included leaders from the Bank of China, Chinese Maritime Customs, the US consul-general, shipping and chemical bosses, Japanese diplomats and business owners, mining, engineering and railways heads, and medicos, famine relief agents and undertakers. In lieu of first names, the roll has only nicknames, like “Cookie” for the Thomas Cook rep, “Fessie” for Mr Fessenden of the Shanghai Council, “Spring” for a Chinese member Mr Lam, “Dragon” for a Japanese mill owner, “Hooky” for Mr Hu Hou-ki, and dare I say it, “Nigger” for Mr A.F. Kimball, a financier.

Shanghai and its surroundings were a pit of intrigues, war-lordism, and squalor. A few years before Sorge joined Rotary there, the club featured in China’s equivalent of the Great Train Robbery, better known as the Lincheng Outrage. It was fictionalized in a 1932 film Shanghai Express, with Marlene Dietrich and the Chinese sexpot, possibly sapphic, Amy Wong. A recent Chinese film version in 2010 was aptly titled, Let the Bullets Fly.

China had acquired from the US an all-steel “Blue Express” train and it was on an inaugural run on May 6, 1923 from Nanjing to Tianjin. Apart from 200-plus Chinese, it carried 30 foreign dignatories including John D. Rockefeller Jr’s sister-in-law. Journos on board included the editor of China Weekly Review, John B. Powell. He was a Shanghai Rotary member, along with fellow club member L.C. Solomon.

At 3am the train hit sabotaged track and derailed, with bandits robbing and kidnapping survivors among the twisted wreckage. The same day five countries’ embassies demanded the Chinese government pay the ransoms. The bandit leader, Sun Maiyao, wanted the money for his 3000-man “Shandong Autonomous Army” which originally had been set up with Chinese peasants to clear dead from World War 1 battlefields. Sun wrote persuasively,

This is to notify the facts that we have hitherto been law-abiding citizens and that we have no desire to become robbers, but in this troubled era of unreliable government we find ourselves compelled to take risks in order to obtain redress for our grievance.

The hostages were corralled on Pao Tzuku Hill, now a big tourist attraction in Shandong. The editor Powell somehow sent a flow of dispatches from the hill, making the heist a near-real-time global sensation. 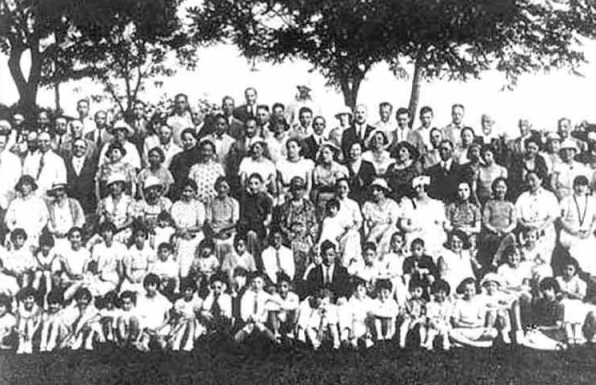 Shanghai Rotary’s real-time predicament was whether to take direct action to release its members from hostage or work through Chicago-based Rotary headquarters. After four days, YMCA executive Julian Petit (still on the member list in 1930, and quite likely one of the faces in the club picnic at left) won the debate and cabled Chicago HQ to mobilise Rotary’s 1500 clubs and 90,000 members to lobby their 27 governments for action.

The Shanghai club’s historian records, RI [Rotary International] replied two weeks later, stating that the matter would be discussed at the next meeting of the International Board on June 14 . To the Shanghai club’s outrage, its protest letter didn’t get a reply till September, five months after the incident and four months after the hostages were freed.

In the event, all the foreign captives after 37 days returned safely to Shanghai. Sun got his army promotion but was murdered at dinner months later.

The edict from Chicago HQ was that Rotary International, being non-political, shouldn’t enter local disputes. Internally at Shanghai, the merits of non-politics were demonstrated by the club’s unified charity work in near-war conditions despite its English, German, Chinese and Japanese membership. 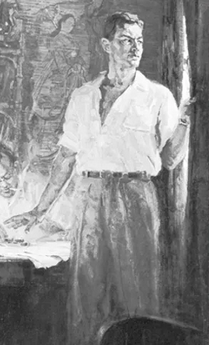 Sorge (at right) took club members and other celebrities out to “fill with wine to loosen their tongues” and “gut them like a fat Christmas goose”, as he confided to his radio man, Clausen. Sorge’s role as social lion required him to quaff whisky in swanky bars and seduce elegant women after dances. This beat his earlier jobs boozing and brawling among the proletariat in Frankfurt dives. However the Soviet spy ring in Shanghai was a shambles and Sorge was lucky to escape its rapid rolling up.

On the ship from Marseilles to Shanghai, Moscow’s planned Shanghai boss, Alexander Ulanovsky, had confided drunkenly to four new British pals about his cover identity for Shanghai as a Czech metals dealer “Kirschner”. The cover preparation had been so good that it fooled a German arms factory, which deputized Ulanovsky/Kirshner to sell weapons illegally to the Chinese. Sadly for the spy ring, the four Britishers were Shanghai CIB officers returning from leave.

The Rotary Club folded in late 1941 and many foreign members were interned. The club started again in 1946 until shut by the Communists in 1952 with seizure of all its imperialist assets. It opened again with government permission in 2006. New members like Sorge are assigned to club committees. I like to think that Sorge put his hand up for “Fellowship” or as a pseudo-journalist, possibly “Publicity”, that being my own Rotary fate for many years.

Sorge’s later success in Tokyo operating out of the German embassy was paradoxically due to his deliberate indiscretions (“No spy would behave like that!”) He seduced at least 30 women including the wives of his top German informants and would rant to them about slaying Hitler with his Samurai sword and becoming “a god”. He praised Stalin to a roomful of top Nazis, and punched to the ground a Japanese policeman who wanted to search his house. Taking a top-speed night ride around Tokyo on his 500cc Zundapp motorcycle, he crashed into a stone wall by the US Embassy and sent the handlebars through his jaw. Even so he managed to call radioman Clausen to the hospital to get rid of all the secret documents in his jacket.

After Sorge’s arrest in late 1941 (the Japanese police had politely removed their shoes before entering his house), he withstood six days of verbal interrogation. Then, like his accomplices, he confessed all.

Abruptly the prisoner sprang from his chair, drew himself up to attention, threw his prison coat on the floor, and began pacing up and down the cramped cell, hands in his pockets.

“Indeed I am a Communist and have been doing espionage. I am defeated!’ Sorge shouted. “I have never been defeated since I became an international Communist. But now I have been defeated by the Japanese police.” He sat down again, buried his face in his hands, and wept bitterly. “I will confess everything,” Sorge said finally, “if I can have a rest.”

On November 7, 1944, the Soviet’s  Revolution Anniversary Day, he was brought to the scaffold at Sugamo prison by the governor, who wore full-dress uniform with epaulettes, brass buttons, white gloves and police sword. Five officials were assigned to pull the trapdoor handle so none would feel personally responsible. The hooded Sorge, who had been refused a cigarette, said loudly three phrases in Japanese: “Sakigun! [the Red Army]; Kokusai Kyosanto! [International Communist Party]; Soviet Kyosanto! [Soviet Commmunist Party].”

The door opened beneath his feet and he dropped into oblivion.

Matthews says it’s a myth that Sorge warned Moscow about the impending Pearl Harbour attack, though he did tell Moscow that the Japanese intended to drive south. Matthews does not enter the controversy generated by defector Gordievsky in 1990 over whether Sorge’s tip-offs were redundant because the Soviets had broken the Japanese codes anyway.

It was not until Khrushchev and Zhukov saw a French fictionalized film about Sorge that his Soviet rehabilitation began as a good German anti-fascist. He got a Hero of the Soviet Union medal in 1964, a ten  kopek stamp, a statue, and a Moscow street named after him. These days there’s a veritable Sorge industry, with 100 books about him in Japanese alone. As a Rotarian I have now added my tiny mite. Maybe Rotary could give him a posthumous Paul Harris Fellow award.