Spy vs Spy: ASIO and the Reds

Victorian CPA Secretary Ted Hill presses an alarm button to signal through the party’s rooms: An ASIO raid has commenced!

Party members know what to do.[i] State President Ralph Gibson empties his person of all useful documents, and eats them.

Party functionary Gwladys Bourke cannot work out how to get rid of her sensitive financial records. She prepares to dive out the 9th Floor window with them, a human sacrifice to the betterment of the working class.

Just in time, she discovers from Hill that the alarm was only a test.

Actually, I wonder about the efficacy of Gwladys’ plan:had she simply scattered the documents out the window, she would not have needed to jump; but if she took the documents down with her, they could be recovered from the impact site.

A touch of paranoia in party offices was understandable. In July, 1949, the Commonwealth Investigation Service had used 24 operatives to raid Marx House, the NSW party’s headquarters, but found little and suspected the party had been tipped off . The raid attracted a crowd of 3,000 passers-by and with considerable aplomb, two party women left Marx House and mingled with the crowd selling copies of “Tribune”.[ii] 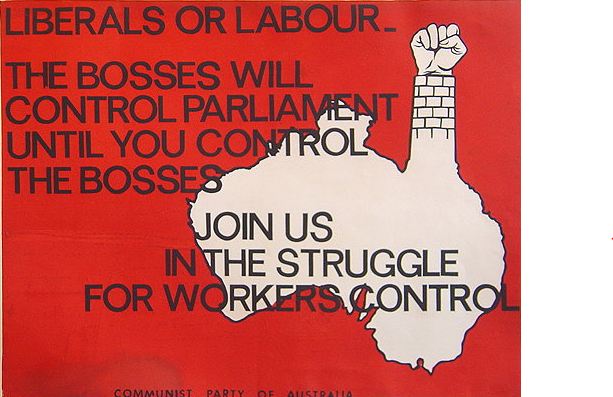 Life was never dull in the  CPA (Vic). The Australian Security Intelligence Organisation had an office some floors below to listen in to the Reds upstairs. Taft worsened their workload by switching between French, German and Russian in any phone chats to cosmopolitan colleagues.

Party officials were confident they had the upper hand over ASIO (how wrong they were!) They had their own captain of security, the party’s “control commission” leg-man Ernie O’Sullivan, a shuffling snoop who was dedicated, ignorant and paranoid. Like a toothless version of Stalin’s “bloody dwarf”, the later-executed Yezhov, O’Sullivan scribbled semi-literate “unmaskings” of loyal party members as spies and wreckers. After Hill got himself expelled in 1963, O’Sullivan’s poison-pen tracts fell into the hands of the rival Bernie Taft faction. Pity no-one’s published them yet!

One weekend O’Sullivan, on Hill’s orders, came in and removed 100 drawers from party workers’ desks, to check for security breaches. He parked 20 of the bulky drawers at Taft’s Surrey Hills home, and to this day no-one knows where the other drawers went. Party workers arrived on Monday and mourned their lost drawers. Over the years, observant visitors wondered why the party’s desks were all drawerless. Taft writes: “I suppose O’Sullivan must have thought that, after the revolution, which he confidently expected, he might be able to put the drawers back in our desks.” 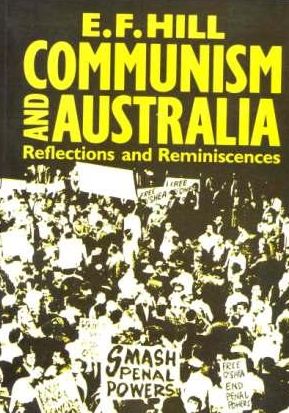 Perhaps the most loyal and heroic of all the Victorian party people was the wife of Bernard Heinz Jr (Heinz Sr was assistant secretary with the Building Workers Industrial Union).

The party in the early 1950s decided to create, yet again, a secret wing that could carry on if the party got banned.[iii] Bernard was nominated to become a ‘sleeper’. He had to resign from the party and cut links with all his leftist friends. What’s more, he was told to accommodate a senior party sleeper plus a printing press underground at his suburban home in outer-eastern Melbourne, where he had just settled in with his new wife. The new project meant laying a concrete slab and then digging a big hole below for the literally underground operations.

This was all very well for Bernard and the party, but what about Mrs Heinz? Did she mind? Apparently, she never complained, at least officially.

These true tales are all drawn from Bernie Taft’s memoirs “Crossing the Party Line” (1994).[iv] He was a one-time joint national secretary of the CPA and for decades on the state executive of the Victorian branch. He recounts his growing distaste for the party’s Stalinists and Maoists. He left the party in 1984, and the party as a whole collapsed in 1991. Today Taft would be 94. His son Mark Taft SC, after co-running the Socialist Forum with Julia Gillard as the paid staff in the mid-1980s, in 2008 became a Judge on the Victorian County Court.[v]

Bernie Taft’s memoirs haven’t had much attention. One noticeable thing is how much overseas travel party leaders did, in an era when overseas trips were a rare prize. In 1968-69 Taft did five trips in 18 months. On one trip in 1968 to Moscow, he had an enjoyable dinner, as one does, with the British spy Donald Maclean, "an impressive person — pleasant, reasonable, and serious."[vi]

THE MEMOIRS get really interesting when Taft describes a pro-communist mole within ASIO who betrayed would-be infiltrators groomed by ASIO to enroll into the party.

For an equivalent mole in earlier times, one would have to go back to the war-time security service, when counter-intelligence on NSW communists was run by a police officer Alfred Hughes, a secret Communist code-named BEN by the Soviets. Hughes adroitly protected top Communist official, Wally Clayton, from scrutiny while Clayton and his group fed valuable documents to the Soviet Embassy. Hughes would sit for hours at the Special Branch HQ reading files about Communists and the party, to which he had unlimited access.[vii] Apart from writing a predictably anodyne report on Clayton for the security director-general in 1945, he provided Clayton (Soviet code-name: KLOD) with Clayton’s own security file, along with the security files on the Soviet embassy’s senior spies Mikheev and Nosov.[viii] Hughes retired as Det Sgt 1st Class in 1960 and died in 1978. 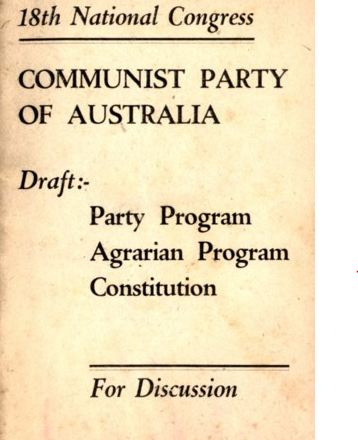 Did the CPA really have an ASIO source? Bernie Taft writes that during the early 1950s, “we often knew the identity of ASIO agents who were about to infiltrate the party. [State party secretary] Ted Hill told a number of us that someone in ASIO would contact him every now and again, and give him the names of people whom ASIO had selected to infiltrate the party…weeks, sometimes up to two months, before they actually did."[ix] Sometimes the party allowed them to join and then kept them under tight supervision. Others were rejected, to the indignation of sponsoring members impressed by the applicants’ enthusiasm.

After the party expelled Hill in 1963, a man calling himself "Bluey" got in touch with party contacts and said that now Hill was out of the picture, he would keep sending notes about the incoming infiltrators. These notes naming new "plants" continued for a year and then suddenly stopped, Taft says.

Taft also describes the party’s Melbourne double-agent in ASIO, Duncan Clarke, a bon vivant and serial annoyer of party women. Wesley-educated, Clarke worked as journalist on the Sunraysia Daily, the Daily Telegraph (Sydney), and then the Herald (Melbourne), where he was a favorite of Sir Keith Murdoch. Clarke then made an ungrateful departure to join the party’s organ Guardian.

The Clarke affair was top secret until Taft’s memoirs.  Clarke was a double agent from 1951-53, on ASIO pay of ten pounds a week. He would meet ASIO handlers in the city and sometimes early on the beach near his Brighton home. He kept Ted Hill fully informed, and supplied ASIO with a regular flow of documents, unbeknownst to other party members. He wrote reports for ASIO on party policies and personalities; and on which journalists were sympathetic. He gave ASIO reports by party leaders before the leaders had even presented them to inner meetings. Clarke claimed that Hill ensured that all the material Clarke supplied would not actually damage the party.

ASIO’S PLAN was to boost Clarke’s prospects in the party and even help him become State Secretary, where he could do wonders for ASIO.

Clarke said he had left ASIO with Hill’s agreement, when ASIO pushed too far by asking for the keys to the Guardian office so it could be scoped out at night. (I thought ASIO could pick locks, especially as it employed “Leon”, a former Chubbs employee who was one of the best lock-pickers in the country, but apparently keyed-entry was preferred).[x] Clarke continued to meet ASIO contacts socially for months afterwards. “Apparently, I was all right with Security,” he told Taft.

Clarke had become infected with Hill’s paranoia, wondering if ASIO had a second undisclosed plant in the party. That agent could blow the whistle on Clarke to Clarke’s ASIO handlers. Clarke also used to fret about whether party mishaps were accidents or successful wrecking exercises by ASIO plants.

Hill himself often labelled his inner colleagues as “security agents”. Taft speculates that ASIO could have been stoking Hill’s suspicions with disinformation. (Such tactics were used by Hoover’s FBI from 1956-71 with great success against radical organisations).

Taft, who must have absorbed a lot without shuddering, writes,

"It makes one shudder to see how that sort of thing works – how ‘evidence’ of subversion, of deliberate damage  to the party, is produced…They [party vigilantes] would argue, ‘Clearly he is an enemy, or he wouldn’t do that when the party is under attack.’ (Of course, the party was always ‘under attack)."[xi]

Clarke wrote for Ted Hill a 200-page report on his ASIO dealings, which went into the snoop O’Sullivan’s archives. The archives were accessed by the Taft faction after Hill, O’Sullivan and Clarke decamped in 1963 to set up the Maoist splinter group. Clarke died in 1991.

Taft says Hill must have had his own ASIO contact while master-minding Clarke as double-agent. Taft reserves judgment on Clarke and what his real activities and impacts were, pending release (unlikely) of ASIO files: "Only then will we know the name of Hill’s source and how much he really knew." Taft hints that Clarke and Hill could have been using ASIO resources to damage their internal party rivals.

ASIO had mixed fortunes recruiting student agents. In 1975 it recruited a Lisa Walters to infiltrate the youth arm of the Socialist Workers’ League (SYL). Nine months later she “came in from the cold” and denounced ASIO’s machinations, and was re-admitted to the SYL as a bona fide member.[xii]

In the late 1960s, ASIO recruited Monash engineering student Peter Higgins to report on Labor Club doings and student activism. He got annoyed about being asked to report on some students’ sexual affairs, and about ASIO’s complicity with Santamaria’s National Civic Council, and told all to the student newspaper Lot’s Wife.[xiii]

In some of the Eastern bloc, security files became public after the fall of the Wall. Perhaps one day we will have a “Canberra Spring” and be able to read the real deal.

Tomorrow: The second of Quadrant Online’s two-part series on the quiet war between the comrades and the spooks

Tony Thomas is a (sort of) retired journalist.

[iii] The same policies were implemented in 1939-40 and 1947, including the hiding of printing presses