The Voice: Don’t Doubt That the Fix Is In 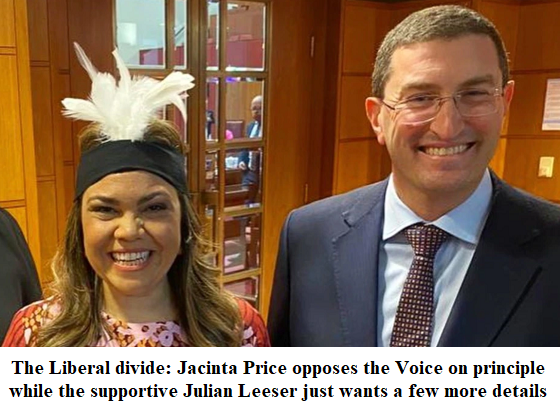 Well, it’s the New Year and it’s Referendum ‘game on’, just as we knew it would be, but will it be a level playing field? No, of course not. Linda Burney, the Minister for Indigenous Australians, has said so herself. In the Sydney Morning Herald’s greeting to the New Year, Anthony Galloway writes “Voice referendum as ‘early as August’, Burney reveals”1 The Albanese Labor government will send Australians to the referendum polls “as early as August”. However, the SMH is very instructive to the keen-eyed and critical observer.

Burney states that “the official Yes campaign is likely to launch late next month, meaning the campaign will ramp up just weeks before parliament votes to set the referendum date.” So there will be an ‘official Yes campaign’, presumably government sponsored, but if there is to be no funding for either side, how then is this “official Yes campaign” to be funded and who will be running it? Doesn’t this run contrary to the government’s clearly stated position as explained in its media release of December 2022 as follows:

The Government believes campaigns in the Voice Referendum should be organised and funded by the Australian community, and does not intend to fund a yes and no campaign for the forthcoming Voice referendum.2

It would appear that, apart from the ongoing ABC and SBS propaganda onslaught (taxpayer funded, in other words), the government will be funding an ‘official Yes campaign’ but as suspected, there will be nothing for the No campaign. Further, the SMH articles tell us Minister Burney has said

the Yes campaign would be an ‘alliance model’ bringing together different groups and people, including the Uluru Dialogue and From the Heart organisations, as well as the Uphold and Recognise organisation, which makes the conservative case for recognising First Nations people in the Constitution.

Really? We know some of the other usual suspects, but who is this ‘Uphold and Recognise’3 group? It’s an organisation co-founded by Liberal shadow minister for indigenous Australians Julian Leeser in 2015. Their website says:

Uphold & Recognise is a non-profit organisation that promotes discussion of how we can recognise Indigenous Australians without disturbing the way that the Constitution operates. The Uluru Statement from the Heart and the Referendum Council’s final report call for Indigenous Australians to be empowered to take responsibility for their own affairs through, among other things, a first nations voice to Parliament. Uphold & Recognise supports these calls.

Note that it does not say without any changes to the Constitution, just the way that it ‘operates’ – very misleading and disingenuous language indeed. ‘Uphold and Recognise’ clearly supports the ‘Voice’ to Parliament.

So with his intense and central involvement with Uphold and Recognise, which spans seven years and clearly supports the ‘Voice’, here’s the question: How can Julian Leeser then impartially be the Liberal’s Shadow Minister for Indigenous Australians? Wouldn’t you call that a conflict of interest, or is it just his ‘area of expertise’? Julian Leeser has been instrumental in developing the ‘Voice’ process for years! In an article in The Australian on 20/1/20214 Leeser, who, along with Labor senator Pat Dodson, was co-chair of the ‘Joint Select Committee on Constitutional Recognition relating to Aboriginal and Torres Strait Islander Peoples’ said: “We recommended a process of Voice co-design jointly led by Indigenous people and government.”

Given Leeser’s extensive involvement in Uphold and Recognise, and the ‘Voice’ process, how will all of this influence the position of the federal Liberal Party? It’s not looking good. Will Dutton take the easy way out and declare a conscience vote, thereby further assuring the demise of the Liberal Party with true conservatives?

In addition, the Uphold and Recognise website notes they have “strategic partnerships” with “the Australian Catholic University’s PM Glynn Institute and Reconciliation Australia as well as corporate partners, who currently include Afterpay and the Commonwealth Bank.” A quick look at the ACU’s ‘PM Glynn Institute’5 and ‘Reconciliation Australia’6 websites clearly show where they stand on the ‘Voice’ – 100 per cent in favour. And one presumes that these organisations, including the Commonwealth Bank, contribute funds to this Uphold and Recognise ‘not for profit’.

The SMH article is worth a critical reading in full for its myriad hidden messages. For example, Burney says, “Once that all mobilises, I think we’re going to have a country that’s ready for change,” In other words, the government will support a radical one-sided propaganda campaign to deluge poor Australians! Burney claims that “the Voice would not have veto power over the parliament, a position backed by a government-selected group of constitutional experts.” Of course the ‘government-selected experts’ are in agreement with the government – that’s why they’re selected! Burney also says, “The sovereignty of a (sic) parliament is not affected” yet other ‘constitutional experts’, not ‘selected by government’, clearly know that it will be, and eventually, so will the sovereignty of Australia.

Finally, Burney claims that “I think it’s OK to have different points of view, of course, we’re going to have to, but the arguments have to be factual. And they’re not.” So here we have Burney already claiming that anything that opposes the ‘Voice’ is not ‘factual’. And further, she patronisingly and condescendingly claims that “many of the arguments against it were ‘a little ill-informed’”, so here we have more of the same. Burney and the Albanese government will simply claim that any opposition to the ‘Voice’ is ‘not factual’ and is ‘ill-informed’, indeed, “misinformation” as their ‘Referendum (Machinery Provisions) Amendment Bill 2022’ claims, without them needing or bothering to provide any evidence whatsoever, because the Voice is ‘all about the vibe’!

The Voice referendum is looming as a dystopian nightmare where we, the ill-informed and relatively powerless masses of Australia, are pitted against a manipulative government, obscure not-for-profits and wealthy corporate propaganda machinery that has been steadily and quietly working away for years to bring us to this point. What can the poor citizenry do to oppose this in the face of such overwhelming power?

11 thoughts on “The Voice: Don’t Doubt That the Fix Is In”

A Discordant Voice in a Culture of Consensus

The Lying Art of Truth-Telling