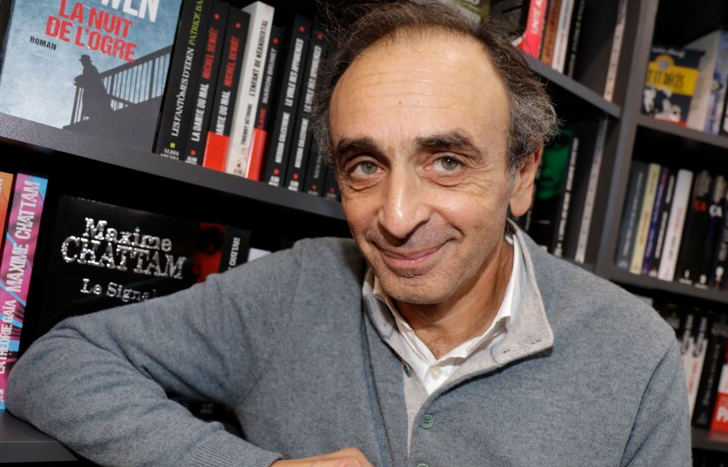 According to Their ABC, French presidential candidate Eric Zemmour (above) is — yes, you guessed it — a “far-right” rabble-rouser, that description appearing as if by rote in a report relating how “anti-racism protesters” stormed the stage and roughed up his supporters for holding opinions of which they disapprove. Such is the view through the ABC’s looking glass: thugs represent decency and free speech the threat.

We’ll no doubt hear more from the national broadcaster over the months to come of Zemmour and his campaign, so just for the record here he is in his own words — a message he broadcast to mark Christmas. It might be worth bookmarking when the ABC foreign correspondents, in their usual Pavlovian fashion, open the spigot on a slobber of cliches about “the French Trump”, “Islamophobia” “white supremacy”, “xenophobia” and perhaps, despite Zemmour being a Jew of North African origin, accusations of Nazi sympathies. — RF

MY DEAR countrymen, my friends: Tonight, Christianity celebrates Christmas. But not only Christianity. For one need not be Christian to celebrate Christmas. It suffices to love the West in general, and France in particular.
The night of Christmas Eve begins the celebration of a civilization – ours – that has enlightened human history. A civilization that believes man is absolutely free, whatever his birth, his past, his environment, his path.

In the Christian world, liberty has a divine nature and must be protected as the most precious treasure.
A civilization that believes men are equal in dignity. Everyone, from the prostitute to the king, and all in between – the beggar, the rich man, the widow, the orphan, the soldier, the leper – are children of god and all are equal before him. No race, no class – a holy equality.

The whole world admires Western art. It is impossible not to be overwhelmed by the Pietà of Michelangelo.
A civilization that believes truth is neither theoretical nor relative but concrete, incarnated, and holy. To deny truth is to deny the Good. The lie is both the day-to-day and the eternal face of evil.

This infinite respect for truth has allowed the enormous rise of philosophy and exact science in the west.
A civilization that believes heaven on earth doesn’t exist and never will. A civilization that refuses to give credence to utopias and projects for a perfect society-communism, Nazism-that destroyed the 20th century and threaten the 21st with a new and still more troubling face.

Knowing how to win in war is good and the Christian world must never refuse to make war when it is attacked. It must win the war, but knowing how to win the peace after victory is harder still.

To this idea, we owe the incomparably peaceful character of western societies when they are faithful to themselves.
Societies that have committed errors, mistakes, crimes: obviously, for it is built by men and all men are imperfect, egotistical, whether believers or not. But a civilization that must be considered the most evolved, sophisticated, creative, and tolerant the world has ever known.

France owes much to Catholicism, and the world owes much to French Catholicism. The long adventure of Catholicism in France is of an unequaled splendor. St. Irenaeus of Lyon, Clovis, St. Louis, Joan of Arc, Thomas Aquinas who taught at the Sorbonne, Bossuet, Fénelon, Blaise Pascal, Thérèse of Lisieux, Paul Claudel, and so many others. The eldest daughter of the Church has borne so many wonderful children, and our 86 cathedrals are the most beautiful of all – of which Victor Hugo made a beloved symbol across five continents.

General de Gaulle, in the greatest confidence, gave regular confession. His faith played a determinant role in the destiny of our country. Without the Cross, there would not have been a Cross of Lorraine.

Censored, threatened, tortured, assassinated: never in its long history has this religion been martyred in such dreadful silence. I solemnly swear that France will make their voice heard on the world stage.

Tonight, Christians celebrate the birth of Jesus. But others – all others – in France can also celebrate Christmas. That is the purpose of Christmas trees, gifts, kisses, and wonderful smiles of children.

My name comes from ancient times, and means “olive tree” in Berber – the tree of peace. Tonight I wish that everyone will find peace – peace in each of us, and peace among us.

Christmas is the opposite of civil war. It is the reconciliation that shines in the night. The humble and moving Nativity, present in so many families, delivers its message through the centuries. The miracle returns every December 24 at midnight.

Thanks to NewCatallaxy blogmaster Dover Beach for the translation

11 thoughts on “A Belated Christmas Message from Eric Zemmour”