No to God, No to Country, No to Family 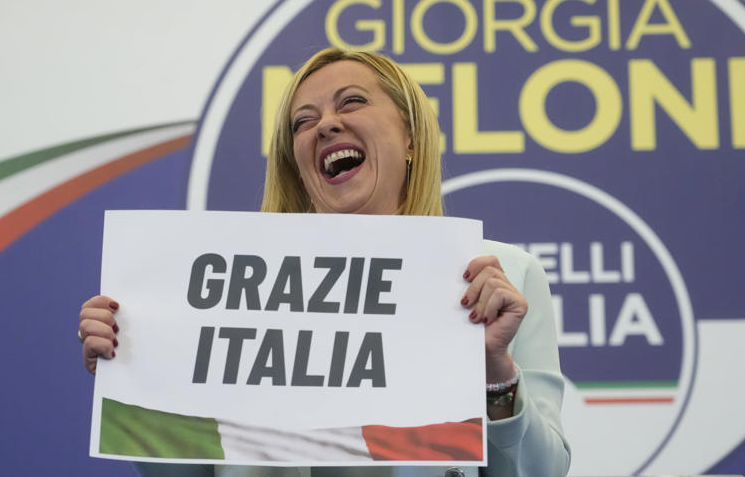 I don’t care what they say, one or two conservative poseurs, Italy’s new prime minister is far, far right. Memo to the ABC, BBC and the New York Times, one far is not enough. Sure, Giorgia Meloni (above) looks pleasant enough. But the rub is in her slogan. God, Fatherland, Family. Next, she’ll be putting Italy first and we know where that kind of sentiment led in the United States in 2016.

I bracket Signora Meloni with the likes of Trump, Marine Le Pen, Viktor Orbán, and that Tony Abbott fellow. All believe in God or at the least pay due lip service. All are nationalists. All are family oriented. Another complete giveaway is that they are all committed to securing their nation’s borders.

Meloni wants to blockade boats carrying hundreds of thousands of Muslim economic refugees from Libya to Italy. Apparently 750,000 have come since 2015. And she’s not grateful for this offset to Italy’s low birth-rate! Gives a heightened meaning to the word ‘ingrate’.

Abbott of course – not to mention John Howard before him – inspired a lot of this unaccountable reluctance to embrace hordes of culturally-clashing illegal migrants. Turning back boats. And to boot, providing life-boats to turn back those who sank their own rickety boats in hopes of scoring warm blankets and hot chocolate on Australia’s shores. And, seductively, what Abbott can do, maybe we can do too, spread like a disease around the far, far right world. I assume it did anyway.

A recent intercessory prayer at my church condemned offshore detention of illegal migrants, another Abbott policy. So you can appreciate how sinful it is to control who comes into one’s country and the circumstances in which they come. Howard, take note.

Of course, it’s not sufficient to condemn the slogan of ‘God, nation and family’. We have to extol its polar opposite; its converse. Here you need to bear with the task because it is a moving goalpost in some respects. Ever-changing fads and fashions have to be respected.

It’s moot, but combatting climate change is currently a fitting replacement for God; more broadly Gaia has long-lasting application. Paganism stands in the wings for those who might yearn for a bit of spiritual uplifting from time to time; gods and goddesses of fire and water etc. Though simply nothingness; nihilism, if you will, has its merits.

The nation state has long since passed its use-by date. We are global citizens. The world is all of the motherland, the fatherland, the gender-bending land. We are one though we are many. As the anthem of that island continent presently referred to as Australia says, “For those who’ve come across the seas / We’ve boundless plains to share.”

Let the things of old pass away. As a global citizen you’ll be in the in the nurturing hands of Herr Schwab and his elite colleagues, Bill Gates et al, at the World Economic Forum (WEF). You will own nothing and be happy. Your digital and biological identity will be fused via the Fourth Industrial Revolution. Not happy about that? You’re a Neanderthal and Gates will sponsor the development of an injection to make you feel content.

Finally, the family as it was understood for millennia is old hat. Commonplace illicit sexual congress, marriage an optional extra in relationships, divorce on demand, abortions at will, they have all seriously undermined the institution. Now LGBTQ+ couplings and marriages have rather cooked its goose, so to speak. Time to move on.

The family, if the term is used at all, must now be understood fluidly. So, Paul Keating, ‘two blokes and a cocker spaniel’ really can a family make. And, moreover, any grouping of people can decide to call themselves a family, provided they realise that their real family is the global family of human beings. All for one and one for all, under benevolent global governance.

To sum up, to keep it simple: No God, no country, no family is the key to happiness and a powerful slogan to defeat the naked popularism of those who want to hold back progress towards an inevitable and bountiful future of human-to-human and human-to-nature harmony. WEF save our gracious world.

Modern Jeremiahs & That Other Prophet