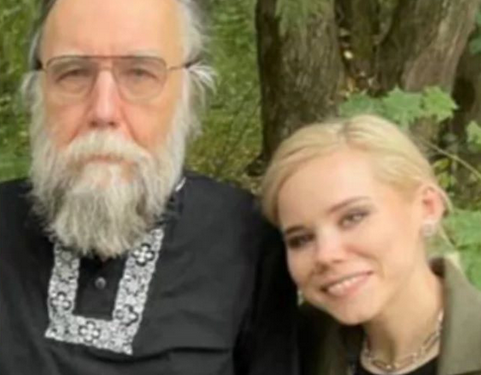 The daughter of ‘Putin’s Brain’ has been killed in a car bomb explosion outside Moscow. It is an event that can only further inflame personal hatreds and ideological tensions around the war in Ukraine.

Darya Platonova Dugina (above with her father), 30, was the daughter of Aleksandr Dugin, a close ally of Russian President Vladimir Putin and the chief ideologue behind the very influential ultra-nationalist doctrine of Neo-Eurasianism. This ideology (see ‘Eurasianism, Putin’s new world order‘, Quadrant Online) and earlier articles) provides the rationale for the Russian invasion of Ukraine. It asserts there is an epoch-shaping ‘clash of civilisations’ underway between the globalism of Western Liberal Democracy, led by the United States, and the ‘multi-polarism’ of Eurasian authoritarianism, led by Russia. It is this ideology that has provided the philosophical and political rationale for the Russian assault on its neighbour.

Darya Platonova was a prominent journalist, a devoted follower of her father, served as his media secretary and as a political commentator for the International Eurasian movement. She openly supported the Russian invasion and was sanctioned by the UK government last month for being a “frequent and high-profile contributor of disinformation in relation to Ukraine and the Russian invasion of Ukraine on various online platforms”, and for promoting “policies or actions that destabilize Ukraine”.

It appears Ms Dugina and her father were due to leave a literary festival together on Saturday evening, but that her father changed his mind at the last moment, leaving Ms Dugina alone in Dugin’s Toyota Land Cruiser. This vehicle then exploded as it departed, was engulfed in flames, left the road, and crashed into a building, killing Ms Dugina. Alerted by the explosion and emergency vehicle sirens, Dugin apparently watched the car burn. It appears certain that he was the primary target of the bomb. 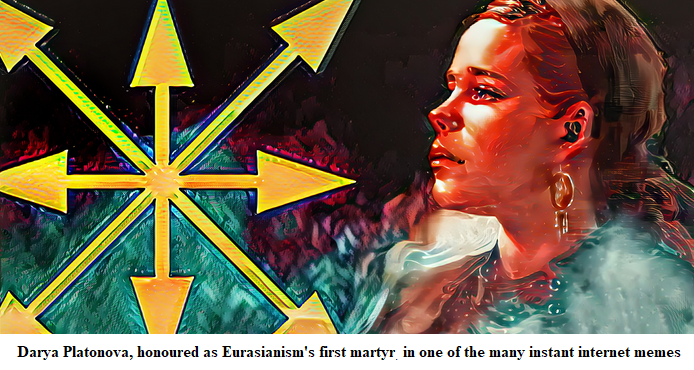 Darya Platonova was steeped in her father’s theories. She graduated in the history of philosophy from the Faculty of Philosophy at Moscow State University. Her research focused on the arcane political philosophy of late Neo-Platonism, arguing that there is an homology between the individual soul and the State considered as the supreme corporate entity, i.e., that there is a fundamental connection between psychic and political processes, a major tenet of neo-fascism.

This means, for example, that decadence at the individual level manifests itself at the political level and vice versa. It is this type of theory that has convinced Dugin, Putin and Russia’s political and military establishment that the West is in sharp decline, that its people and its leadership lack confidence, courage and resolve, and that it will ultimately prove to not have the will to block the Russian takeover of Ukraine or the advance of Eurasianism.

In a recent interview with Russia’s Geopolitika News, Ms Dugina explained that she was  an activist in the International Eurasianist Movement promoted by her father, focusing on the analysis of European politics and geopolitics. She began by affirming the basic premise of Neo-Eurasianism, i.e., “that the Globalist moment is over, the end of Liberalism has come, [and] the end of liberal history.” (“Darya Platonova: The War in Ukraine [is] a Clash of Globalist and Eurasianist Civilizations”,  geopolitika.ru, 27/5/2022)

She explained how, in a desperate attempt to protect itself in its death-throes, the West is seeking to gain hegemony over Ukraine which, according to Neo-Eurasianist theory, is an “intermediate zone” between these two civilisational blocs, a geopolitical space where conflict is inevitable:

The situation in Ukraine is really an example of a clash of civilisations; it can be seen as a clash between Globalist and Eurasian civilisation. After the ‘great geopolitical catastrophe’ (as the Russian president [Putin] called the collapse of the USSR), the territories of the once united country have become ‘borders’ (intermediate zones) – those spaces on which the attention of neighbours has increased, with NATO and especially the United States interested in destabilising the situation on Russia’s borders.

In this [ideological] capacity, I appear on Russian, Pakistani, Turkish, Chinese and Indian television channels, presenting a multipolar world view of political processes. My areas of interest are both the space of European civilisation and the Middle East, where a kind of Conservative Revolution is taking place – from Iran’s constant confrontation with American hegemony or Syria’s struggle against Western imperialism to Turkey, which is now showing interesting tendencies to move away from NATO and the Anglo-Saxon geopolitical bloc and is trying to build its foreign policy on a multipolar basis, in dialogue with the Eurasian civilisation.

Ms Dugin went on to deny that Western sanctions were isolating Russia. Indeed, she insisted that Russia had the support of many countries seeking to escape from the hegemony of the Globalist West, and she cited Hungary in Europe, Turkey and other countries in the Middle East, as well as China, India, Venezuela,  Cuba, Argentina, Brazil, Syria, Mali, Sudan, Zimbabwe, the Republic of Congo, and Eritrea. “These reactions indicate the end of the myth of a ‘one world space’”, i.e., of the US-led liberal world order. Indeed,

Russia’s special military operation in Ukraine accelerated the formation of a multipolar world and catalysed many geopolitical processes.

Russia was thus not a victim of isolation, but a pioneer of a multipolar world order.

Such a triumphalist outlook illustrates the massive scope of the geopolitical ambitions of the Neo-Eurasianists, led ideologically by Aleksandr Dugin for over three decades, and more recently at the political level by Putin and his coterie.

The attempted assassination of Dugin and the death of his daughter will undoubtedly serve to galvanise these forces.  The war in Ukraine will now move to another level of savagery and we will soon see whether Dugin’s analysis of the decadence, weakness, and ultimate cowardice of the West is accurate, as the Neo-Eurasianists pursue their grand scheme to commandeer and re-direct the course of world history from liberal democracy and towards political authoritarianism on a continental scale.