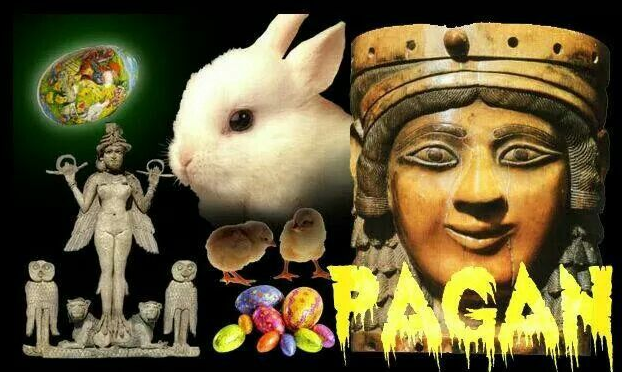 Every time there is a major Christian festival, someone pops up with the claim that, of course, this was really a pagan festival that Christians appropriated. And then the rest of the herd pass along whatever latest silly graphic (like the one above) has been created this time around to make the same claim.

Every single one of these claims is silly, tedious and ignorant. Not to mention intrinsically unlikely, given the determined opposition by Christian leaders East and West to any watering down or mixing of the Gospel message with local culture or religion.

Take the graphic going around Facebook showing a statue of Ishtar, with the claim her name is pronounced Easter, and that, like obviously, dude, that’s where Christians got the whole idea of Easter.

There is not a single thing in that post/graphic which is true. Not even the statue – a statue of the queen of the night from the Old Babylonian period – some 2,000 to 1500 years before Christ. It could later, in the neo-Babylonian period (c600 to 500BC) – have been thought to be an image of Ishtar (pronounced ‘Ishtar’, as it is spelled, not ‘easter”). But there are other possibilities, and archaeology is uncertain.

Ishtar was a minor goddess in the Akkadian/Assyrian/Babylonian pantheon. The Babylonians were defeated by the Persian Cyrus the Great in about 550BC, and the few temples dedicated to Ishtar fell into desuetude or were converted for use by Achaemenid deities. The Achaemenids then underwent a religious revolution of their own with the rapid growth of Zoroastrianism, before being defeated by the Greeks led by Alexander the Great at Gaugamela in about 331BC.

At Alexander’s death, the Eastern part of his empire was taken over by his general Seleucus Nicator. His dynasty, the Seleucids, maintained control over a large but declining empire that included most of the Middle-East until being defeated by the Roman general Pompey in 63BC.

By the time we get to 1st Century Judea we are more than 500 years from the time anyone had any serious interest in Ishtar, and 1400 kilometres away by normal trade routes.

There are no references to Ishtar in 1st Century Greek or Roman literature, and it is unlikely anyone living in Judea or Galilee or Samaria had ever even heard of her. Suggesting that because Ishtar and Easter sound vaguely alike they must mean the same thing makes as much sense as saying chocolate and choo-choo train sound alike so they must mean the same thing. It is just silly.

Quite apart from this, the word “Easter” was not used to describe the celebration of the Lord’s passion until over five hundred later, in England. Everywhere else, even today, the word for that celebration is Pascha, derived from the Hebrew word pesach, meaning Passover. It very early became a custom for Christians to give each other gifts of red-dyed eggs on the morning of Pascha, partly because they had been fasting from eggs and meat for the last forty days, and this was time for celebration, but more importantly, to symbolise passing over into new life won through the blood of Christ.

The Venerable Bede, the great historian of the early English Church, offered an explanation for the use of the term Easter in chapter fifteen of De Ratione Temporum (On the reckoning of Time), written about 725 AD:

Nor is it irrelevant if we take the time to translate the names of the other months. … Hrethmonath is named for their goddess Hretha, to whom they sacrificed at this time. Eosturmonath has a name which is now translated “Paschal month”, and which was once called after a goddess of theirs named Eostre, in whose honour feasts were celebrated in that month. Now they designate that Paschal season by her name, calling the joys of the new rite by the time-honoured name of the old observance.

However, careful as Bede usually is, this sounds like a “just-so” story; an explanation invented after the fact, and without any evidence. Kipling’s delightful Just-so stories were amongst my favourites as a child, and I can still tell you how the camel got its humph.

Bede is the only person to refer to a goddess by the name of Eostre. All later references to Eostre, or Ostara, or whatever other transliteration is given, including works by the Brothers Grimm, are based on this single sentence. It is likely that Bede simply assumed that because other Saxon months were named after gods and goddesses, Eosturmonath must have been too, so he deduced the existence of a goddess Eostre.

The Encyclopaedia Britannica has another explanation:

“There is now widespread consensus that the word derives from the Christian designation of Easter week as in albis, a Latin phrase that was understood as the plural of alba (“dawn”) and became eostarum in Old High German, the precursor of the modern German and English term.”

In other words, the Christian use of the phrase “In albis” – “at the dawn” (of new life, new beginnings, new hope) became in Old German “eostarum” dawning. Eosturmonath was named after the Paschal celebration. The word Easter ultimately derives from Christian use of the Old High German word eostarum, meaning dawn.

Whether Bede was right, or modern scholarship and the Encyclopaedia Britannica are right, the Pascha was well-established throughout the empire and beyond, long before a small group of Christians in England began using the name of the month to refer to the celebration of Jesus’ resurrection.

This essay was first published by Quadrant Online in 2017 and is reprised today because the intervening years have seen no decrease in the production and appetite for ahistorical nonsense.

Gillard, the UN and Me

Charles Bean and the Anzac Legend