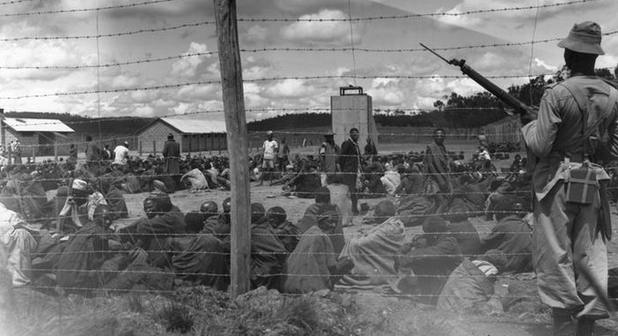 The promotion of black-armband narratives about colonialism and imperialism has become fashionable within our universities, schools and the media. The growth of this view of the world has been the work of revisionist historians and academics in a university system that has been increasingly shifting leftwards. A new book by Lee Boldeman uses a case study of Kenya’s Mau Mau rebellion in the 1950s to reveal how revisionism is practiced and black armband revisionism has been used to attack the British Empire by re-scripting our understanding of events in terms of a narrative about colonial villains and colonized victims. 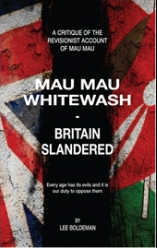 court case. Boldeman’s book engages with and challenges the validity of these ideas. This Mau Mau court case resulted from a lawsuit brought by a group of Kenyans who argued the British Government should be held responsible for abuses committed by a British colonial administration. The court case served to focus media attention on Kenya’s 1950s insurgency war and the accompanying colonial era state of emergency which had run from 1952 until 1960. The outcome of this British court battle granted Kenyans the right to claim compensation from the British government for any abuse or suffering they had endured as a result of being detained during the Mau Mau insurgency. As a consequence, a settlement was negotiated with the British Government on behalf of 5228 Kenyans. As part of the settlement, the British government also funded a Nairobi statue to the victims of the Kenya Emergency, plus Britain’s foreign secretary was compelled to make statement that the British government regretted any abuses that took place.

Boldeman’s book helps us understand the impact revisionist academics can have in contemporary society. Rewriting history has real consequences, as seen by how a court of law can be influenced by a revisionist history that constructed the Mau Mau as victims of British colonialism, while choosing to ignore the 30,000 Kikuyu civilians killed by Mau Mau terrorists for being British loyalists and for refusing to join the Mau Mau rebellion. Boldeman’s book systematically tells us how our understanding of colonial Kenya and of the British Empire has been skewed by historical revisionism. The Mau Mau court case becomes just one example of how a narrow range of academic views can be selected and emphasised to influence how past events are interpreted. Boldeman shows how academics, whose work was influenced by Marxism or Africanism, cherry-picked information to produce interpretations of the Mau Mau that his book disputes by presenting the evidence that the revisionists chose to leave out. Boldeman pays particular attention to the way in which Caroline Elkins’ writings have served to simultaneously demonize the British colonial authorities and legitimate the Mau Mau cause. An important feature of Elkins’ work is her claim that the British account of the Mau Mau war was propaganda and myth. Boldeman’s book flips this around and argues instead that it is academics like Elkins who are the myth-makers.

An important feature of Boldeman’s book is an examination of the underpinning assumptions of revisionist historians and how they go about constructing new historical narratives that conveniently align with the contemporary academic fashions of anti-colonialism and celebratory decolonization. Further, Boldeman notes how a coalition of interests has pushed this revisionist exercise with regard to the story of colonial Kenya – a coalition consisting of intellectuals influenced by either Africanism or Marxism, plus Kenya’s contemporary (Kikuyu) political elite. Importantly, this Kenyan elite has a vested interest in selling the idea that the Mau Mau was a struggle for national liberation supported by a majority of Kenya’s population, instead of being the struggle of a tribal minority. The reality is that the Mau Mau drew their support from only part of one tribe – the Kikuyu. And the Kikuyu represent only 25 per cent of Kenya’s population. As Boldeman notes, presenting the Mau Mau as a “national” uprising of all indigenous Kenyans against British colonialism is another example of the skewed portrayal that has been gaining ground in the era of black armband historical narratives. When considering the vested interests of Kenya’s present day ruling elite, it is worth noting that the current Kenyan President, Uhuru Kenyatta, is the son of Jomo Kenyatta, who Boldeman demonstrates was a core Mau Mau leader. In this regard it is worth noting that Boldeman provides a useful portrait of Jomo Kenyatta, examining his connections to the Mau Mau; his time in both England and the Soviet Union; the influence of other British Empire activists (such as Padmore and Nkrumah) on his political thinking; and insights that Kenyatta’s book, Facing Mount Kenya, gives us into his thinking.

An especially valuable feature of Bolderman’s book is his use of a range of documents (including court records; the Corfield Report; and Red Cross accounts) to challenge the revisionist narrative. In order to portray the Mau Mau as victims of unjust British colonialism and as legitimate rebels the revisionists systematically bury their horrendous acts of terrorism against not only white settlers, but also against those Kikuyu who remained loyal to the British colonial government. Indeed, far more Kikuyu loyalists were brutally killed by Mau Mau than were white settlers. This is hardly surprising given that terrorist wars precisely deploy terror against civilian populations in order to frighten those collaborating with governments. As Bolderman recognizes, the revisionist ‘victim narrative’ precisely necessitates burying the fact that the Mau Mau was as much as anything else a Kikuyu civil war fought between those Kikuyu who joined the Mau Mau and Kikuyu loyalists. But, of course, since revisionist historians are primarily involved in pushing a ‘victims-of-colonialism’ narrative, they must of necessity hide the fact that large numbers of indigenous loyalists are always a feature of empires.

Drawing attention to the tens of thousands of Kikuyu civilians killed by Mau Mau serves Boldeman’s purpose of exposing how revisionists skew our understanding of history through how they select and emphasise some facts and ignore others. But just as important is Boldeman’s discussion of the brutality and viciousness of Mau Mau killings which were guided by spiritual seers/traditional healers (mundu mugos). Boldeman notes the importance of Kikuyu spiritual life and how the Kikuyu’s animistic religion impacted on Mau Mau oath-taking – drawing particular attention to the centrality of the oath as a core feature of Mau Mau recruitment, rebellion and terror. In this regard he discusses the significance of divergence between the Kikuyu’s understanding of reality and the British understanding; and he deploys his wide reading in philosophy, history, political philosophy and comparative religions to consider how these differences in worldview between the British and the Kikuyu fed into the Mau Mau conflict.

Given that Boldeman is concerned with pointing out the gaps in the revisionist history of 1950s Kenya he necessarily spends much time in examining the British response to Mau Mau, which consisted of a classic deployment of counter-insurgency warfare coupled with the building of a network of protected villages for Kikuyu civilians, and a system of camps for the screening, detention and rehabilitation of those believed to have been recruited by the Mau Mau. In other words, Britain responded to the Mau Mau using the same methods it (successfully) deployed during the 1950s Malaysian Emergency. Over the course of the war, 266,000 Kikuyu were detained. Most were quickly screened and released; but 109,000 (who had taken the Mau Mau oath) went through a rehabilitation process before being released. Given the criticisms levelled against the system of camps by revisionist historians (especially the killing of 11 detainees at the Hola Camp where hard-core Mau Mau were sent), Boldeman spends some time explaining the workings of this system within the wider context of a counter insurgency strategy.

As one reads Mau Mau Whitewash. Britain Slandered one is constantly aware that this is a book born of a deep frustration with the way revisionists construct ‘victims’ of colonialism, a strategy Boldeman felt compelled to refute while calling for a more balanced view. It is a pleasure to read someone  at odds with the current zeitgeist of anticolonialism and victimhood.

The suicidal folly of tolerating the intolerant