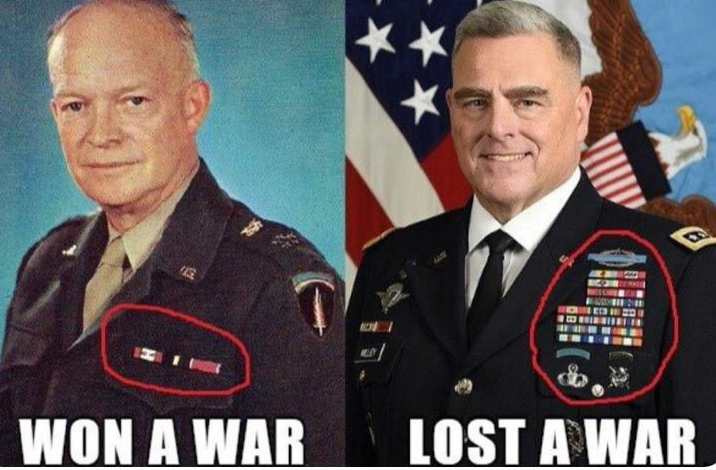 US General Mark Milley’s conduct has been unconscionable and he must go. It seems, in October 2020, before the US presidential election, he claims to have received received intelligence that the Chinese feared an imminent attack by the US because President Trump was in danger of losing the election and becoming increasingly hostile to China.  So, in order to ensure there was no misunderstanding, he phoned his Chinese counterpart, General Li, to tell him not to worry – there was no attack planned and if there were, he would warn Li in advance.

Now, anyone with half a brain would know that if the Chinese did fear an attack their fears would be absolutely groundless. Trump was focussed on winning the election.  What he feared most was vote tampering.  The last thing he would have contemplated to restore his flagging electoral prospects would be to launch an attack on China.  In 2016, Trump had campaigned on a platform of not getting involved in wars.  In the early days of his Presidency, he went out of his way to avoid a war with North Korea, and was vehemently criticised by much of the elite establishment for his approach.  He was instrumental in the withdrawal from Afghanistan which Joe Biden, intent on setting up a September 11 photo op, bungled with his customary aplomb.

So, if Milley really believed Trump was contemplating such an attack, he must be brain dead. So, let’s assume he didn’t really believe Trump would be so stupid and he was just acting to defuse a potentially tragic situation.  Many commentators have commended him for that, including The Australian‘s Greg Sheridan, whose loathing for Trump blinds him to the obvious: Milley, who has failed relentlessly upward in his career, is a soldier of the modern school, more adept at tackling “white rage” than commanding a fighting force.

But defusing a situation entirely of his imagination was not Milley’s  job. Milley’s duty was to report to President Trump that he had received disturbing intelligence, proffer advice (possibly that he, Milley, should phone General Li with reassurance) and then act on his president’s decision.  If he could not accept Trump’s decision, his duty was to resign, in which case he would be justified in going public.

And what if Milley, got it wrong and overestimated his rapport with General Li?  Did he not consider there was a possibility that Li or his boss might not accept Milley’s assurances and act pre-emptively.  If he thought there was a remote chance that China might act – and he must have thought that to have made the call in the first place – did he not have a duty to advise his Commander-in-Chief of this possibility?

So, making the call on his own account was a serious misjudgement.  But having done that, and knowing that there never was a real threat to China from President Trump, decency should have obliged him to exercise some discretion and take that call to General Li to the grave.   There was no benefit to the United States (quite the contrary) from his release of this information.  It can only have been done to discredit President Trump – to emphasize and legitimize the Left narrative that Trump was going crazy, a danger to democracy.

Milley is still a serving officer (and unfortunately likely to remain so).  What right does he have to  release to the public sensitive security information?  Is not the content of phone calls between the Chairman of the Joint Chiefs of Staff and a senior officer of a foreign – hostile – power, classified information?  Top Secret at least, I would imagine.

On that basis alone, Milley should be disciplined.