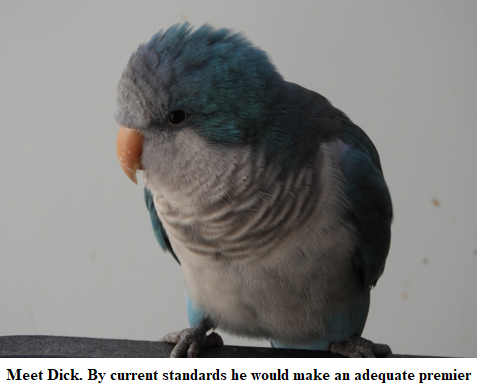 My wife has a parrot she calls “Dick” who is adept at stringing words and phrases together which, at first blush, often seem to make sense. Sometimes they are even in the proper context. He says such things as “Dick wants a bath” and “Dick is a very, very, very clever bird”. He can repeat several verses of “Old McDonald’s Farm” and other examples of rote learning and even knows when it is appropriate to announce “time for bed”. The bird is very polite and says “thank you” when presented with a meal or a bath.

There is no doubt that Dick is a clever parrot. While an extremely intelligent bird, as a conversationalist Dick is a fool. Most of the time his rambling thoughts result in an unintelligible stream of squawks, words and phrases. In this respect Dick reminds me of our Prime Minister and every one of the premiers. They, too, create clever soundbites and two- and three-word slogans which, in the final analysis, are just unintelligible squawks and gibberish. For example, all of them are fond of parroting words and phrases that they have happened upon, such as “tackle climate change” and “reduce emissions” and “meet our Paris commitments”.

Examined under the clear light of logic and reason, such pronouncements are every bit absurd as those uttering them. For one thing, “climate” is a regional parameter used to compare the typical weather (over thirty or more years) in one geographical locale with that of another. “Change” requires a metric, and in the case of climate, that metric is a classification. An historical examination of the classification for many regions reveals no significant change for over a hundred years. Any thinking person must conclude the term “climate change” is no better than parroted gibberish.

There is no empirical data which supports the popular notion that “emissions” of CO2 are in any way shape or form related to the weather. Yet claims about “reducing emissions” and comparisons of the “emissions” from one country to another are strung into the most ridiculous rants. Not to be outdone by the PM and the premiers, there is, of course, the clear, obvious insanity of the Greens, who have ranted about climate doom for decades, every single one of their stated deadlines for global catastrophe passing without incident. Such a yearning for disaster is a testimony to the madness of our times. Even a relatively dim parrot grasps that the sun has something to do with terrestrial warmth, which makes them smarter than the soundbyte squawkers  who prefer their own modelling to the laws of physics and thermodynamics.

Recently, however, the parrot-like mimicking has gone from the sublime to the ridiculous. It is obvious to anyone capable of critical thought that the COVID pandemic has been mismanaged at every level from the very start — from those long-ago days of ‘flatten the curve’ to the monstrous indignities still being forced on Melburnians by an arrogant scoundrel of a premier. Daniel Andrews is not alone, of course, just further down the road to the demolition and trampling of our Constitution, the Biosecurity Act (2015), the Privacy Act (1998), the Nuremburg Code (1947) and virtually everything that has grown good and holy over the course of the past 500 years. Surely they cannot be unaware that the entire drama has been enabled by the faulty PCR test, which produces so many false “cases” US authorities are retiring it? The mindset of the elites is to achieve 80 per cent of the population “inoculated” with hastily developed gene therapies erroneously called “vaccines”.

What do they expect to accomplishby rationing the truth while holding fast to their flawed narratives? Surely, they are aware that every other region which has reached a high proportion of the vaccinated (Israel, Gibraltar, Iceland, etc) has experienced a brief reduction in COVID deaths only to be followed by a short, sharp spike in infections, hospitalisations and death? Do these people have no more sense than a parrot? It would certainly seem that way.