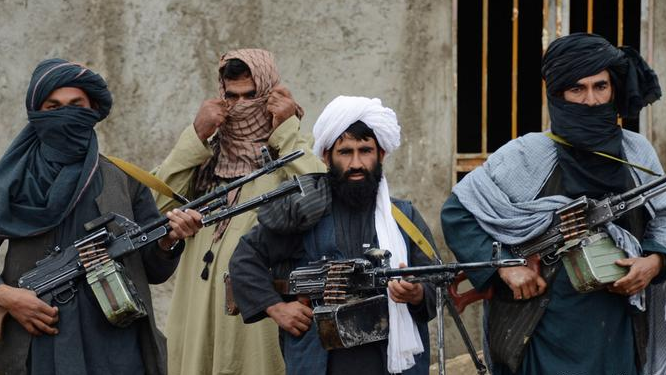 Having spent two years of my life on the border between the contemporary Uzbekistan and Afghanistan as a Soviet Army conscript medic many years ago, my take on the Western withdrawal from this sad place is quite different from what might be called the op-ed page consensus. It was painfully obvious that the Western attempt to help Afghans build a modern state had no chance of success because it never gained popular support. The long-term presence of a Western military coalition in Afghanistan was a grievous political miscalculation, not least because it allowed an increasingly aggressive Russia to direct its resources towards achieving its expansionist goals instead of defending its southern borders. Astonishingly, Western governments persisted with this folly for 20 years, the result being no gain whatsoever. In reality, Western forces were protecting Russia and China from radical Islam’s penetration instead of looking after its members’ own best interests.

At last the penny dropped! The ‘sudden’ withdrawal of Western forces has nothing to do with abandonment of the Afghani people to the Taliban’s less-than-tender mercies as it never won hearts and minds — quite the opposite. What we’re about to see is the beginning of the pushback by the West against Russia and China, the beginning of the America’s embrace of asymmetrical war. The fact of the matter is that this withdrawal has created a political vacuum and the related need for it to be filled.  In one  stroke the US has created a pressure point for the Russians to contain and on which they will be obliged to spend their limited resources. What 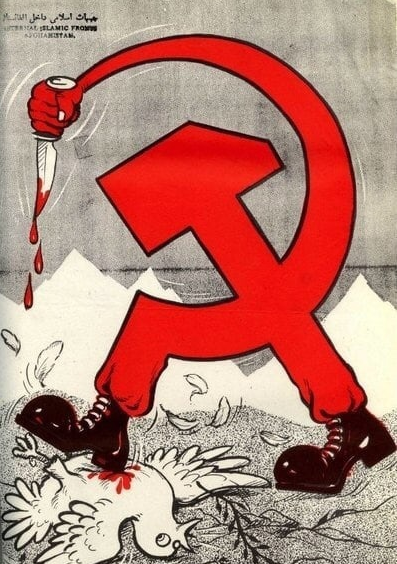 goes around, as they say, comes around.

The Taliban does not change its spots. This makes it useful: The posters reproduced on this page are the product of the Taliban’s propaganda department during the Soviet’s attempted occupation, which commenced more than four decades ago. This invasion was the most stupid decision the Politburo has ever made. Okay, the second-most stupid after adopting Marxism as its guiding principle. The invasion was one of the chief reasons for the USSR’s disintegration – the biggest geopolitical catastrophe of the 20th Century, by Mr. Putin’s reckoning.  This 1979 decision to send tanks and troops south was, however, a manifestation of the universal pattern of behaviour observed in pretty much any totalitarian state. Despite many internal problems they inevitably go for an external expansion. Just as inevitably, such efforts carry the seeds of their architects’ ruin

A Taliban delegation recently visited Moscow, reportedly to assure Putin & Co of their commitment to peace, brotherhood and universal love. This is the same Taliban that produced the posters seen here, so any and all current expressions of amity for Moscow need to be taken with a grain of salt. While the Taliban might not be good for anything more than oppressing women, cultivating beards and blowing up ancient monuments, its memory and capacity for maintaining a grudge cannot be faulted. Its record of drug trafficking, international terror-peddling, oppression of women, murder of anyone even remotely suspected of not following their version of Islam and fanatical hatred towards liberal democracies makes it highly improbable that today’s reassurances will be taken seriously in the Kremlin. In other words, another Afghan war with several participants but no Western involvement is a 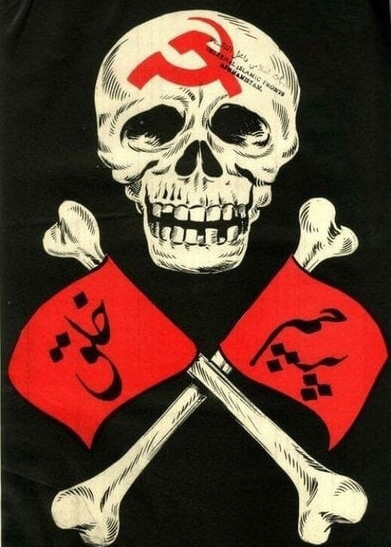 Unravelling of instability: The withdrawal of coalition forces has demonstrated the dysfunctional nature of the present Afghani government. Their military is disintegrating and mass desertions are common, with huge movements of troops in fear of Taliban vengeance fleeing north across the border into Tajikistan, the number of Afghani soldiers and their families seeking refuge there are elsewhere is growing exponentially. Refugee camps to accommodate the deluge of displaced humanity are going up, with the reluctant hosts openly worrying about their ability to cope. The Afghani government, such as it is, is in nominal charge of only a handful of  districts. It appears that, instead of organising the resistance, government members, like their deserting troops, are also organising their personal means of escaping the advancing Taliban.  Nobody expects the Afghani government to survive much longer.

Moscow and Beijing have reason to worry: A common mistake autocratic and totalitarian regimes seem habitually to make is acting on their perception that a key weakness of Western democracies is their aversion to wage war. This is true — liberal democracies are slow to anger, but a weakness it is not. When the necessity is to fight they will. Just ask Nazi Germany and Imperial Japan.

The present withdrawal of Western forces is a brilliant move on the chessboard of the Great Game. Western 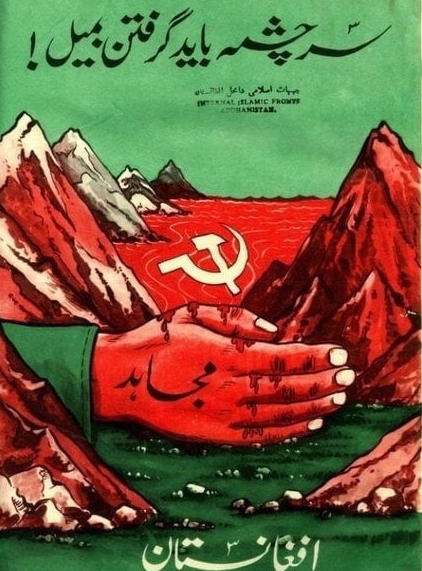 economic sanctions on Russia are about to be supplemented, and the irony of that is rich indeed: the Western coalition has taken a leaf from the Kremlin’s book and is poised to use the Taliban as a proxy.

American forces are leaving significant amounts of weapons and other military supplies behind — hundreds of Humvees, tanks, large calibre artillery pieces, arsenals of assault rifles and boundless mountains of ammunition, plus trucks, personnel carriers and all the rest.  The amount of weaponry and other supplies being abandoned is staggering. Ostensibly, this is all being transferred to the Afghani Army so it can contest the field with the advancing Taliban. However, with the army abandoning its own weapons in a headlong rush to the border, those coalition weapons will fall inevitably into the Taliban’s hands. Whether or not the Taliban is aware of its new role as a US proxy is immaterial. Focussed on fighting for its own aims and goals, an increasingly well-armed Taliban is now in a position to spread its distilled, purified and uncompromising brand of Islam beyond Afghan borders.  Russia and China share the same weak underbelly in the Muslim-majority states such as Uzbekistan, Kazakhstan, Tajikistan, Kyrgyzstan and, last but not least, the Syntzyan-Uyghur region of China. Don’t imagine for a moment the Taliban isn’t aware of the opportunity for mischief on a grand scale.

None of this means the Taliban will attempt an invasion of Russia or China. What it does mean is that it will generate a demographic pressure within these weak states, creating an outflow of refugees and/or migrants to Russia. With a tidal wave of the Afghan refugees now pouring over the borders into those states, the Taliban will need no prompting to recognise an opportunity to 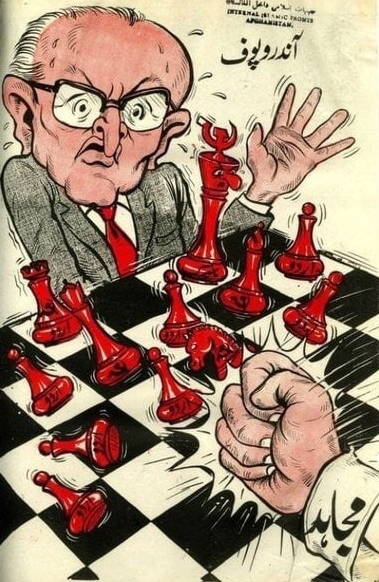 salt the crowd with operatives and  activate sleeper cells. The gradual increase of radical Islam’s pressure within the impoverished states is likely to produce civil conflicts, which these states might find difficult to control. Similarly, an introduction of such a religious incendiary into a seething Muslim-majority Syntzyan-Uyghur region might lead to uncontrolled consequences. Imagine what a bold Taliban raid on the concentration camps overflowing with tens of thousands of Muslim prisoners would do for the Chinese stability and security. Ironically, Taliban would gain a massive image improvement worldwide, should such a turn of events come to pass.

A taste of its own medicine: The recent refugee wave of the Syrians and other Middle Easterners inflicted considerable damage to host nations in Europe. This refugee wave was created, in no small measure, by the hybrid war tactics successfully employed by Mr Putin and his cohorts against the liberal democracies. The other components of this insidious confrontation between the democratic West and autocratic Russia, China and Iran include cyberattacks against vital Western infrastructure, the promotion of energy dependence, spread of corruption, technology theft, disinformation and propaganda. Even China and Russia’s habitual cheating in sports can be seen as aspects of their asymmetrical war.

The measured and proportional response by the West, such as economic sanctions, have been laughed off by Russians. The rapid and the decisive withdrawal of the Western coalition forces might change the equation. Being confronted with the dreadful deja vu  of fighting the feared Taliban once again could force the Kremlin to taste its own medicine.

One can only wonder why it took so long for the US and its coalition partners to wake up?

The Case for a Nationwide Lockdown

Abortion: Black, White and Grey All Over