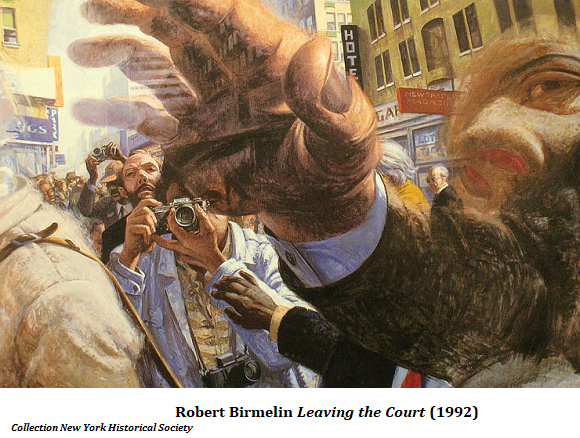 And everybody praised the Duke
Who this great fight did win.
“But what good came of it at last?”
Quoth little Peterkin.
“Why that I cannot tell,” said he,
“But ’twas a famous victory.”
— Robert Southy After Blenheim (1795)

Former Attorney-General Christian Porter has discontinued his defamation action against the Australian Broadcasting Corporation (ABC) and journalist Louise Milligan, declaring the settlement of the case was a “humiliating” outcome for the ABC. Speaking late on Monday outside the court after a settlement was agreed to, Porter said, “That is a humiliating backdown for the ABC, no matter what way they want to spin it. They regret the outcome of that article.”

“What I wanted was for the ABC to acknowledge that the way in which they reported this was sensationalist and wrong … And they have said that they regret the outcome of their reporting,” he added.

The public broadcaster though spun the outcome differently, saying in a statement on Monday how “all parties have agreed to not pursue the matter any further. No damages will be paid.”

Porter was seeking aggravated damages over a story published on Feb. 26 and headlined, “Scott Morrison, Senators and AFP told of Historical Rape Allegations against Cabinet Minister.” That article begins as follows,

Australian Federal Police have been notified of a letter sent to Prime Minister Scott Morrison detailing an alleged historical rape by a Cabinet Minister in the federal government.

It then contended a cabinet minister may have raped a 16-year-old girl in 1988, which could have contributed to her taking her own life decades later. The story referred to what might have happened only as an allegation. It did not affirm that it definitely happened, and it did not name Porter. However, Porter identified himself in a press conference held on March  3, saying he was the cabinet minister accused of rape. He then took legal action against the ABC for defamation.

The case was always going to be difficult to prove because it rested primarily on whether a casual reader, rather than a highly politically engaged individual, would know “beyond any doubt” that the unnamed cabinet minister was actually the former attorney-general. This point would have been very difficult for Porter’s legal team to establish as a fact, given his lawyers need to demonstrate that he was easily identifiable to many Australians as the subject of the allegations.

But then the odds against Porter got higher.

Firstly, his case was to be heard by Federal Justice Jayne Jagot. Justice Jagot was appointed by the former Rudd government in 2008 but passed over for promotion to the High Court by Porter to the “surprise and disappointment of many around the Sydney courts,” as Crikey put it.

Secondly, Porter suffered a serious setback to his case when his top lawyer, Sue Chrysanthou, was restrained by the court from acting for him due to a conflict of interest. Chrysanthou had taken his case after advising on issues related to the case of Joanne Dyer, a friend of the deceased who helped make the allegations public. It was at this point that the lawsuit was dropped, with both parties agreeing not to pursue the matter further. The ABC would, however, cover the costs of mediation that resulted in the settlement.

By Porter’s reckoning, this characterised as a victory. But this is simply not the case. On the contrary, an ABC spokesperson said the broadcaster stands firmly by the importance of the article but would update it with the editor’s note, which it did:

Editor’s note (31/05/2021): On 26 February 2021, the ABC published an article by Louise Milligan. That article was about a letter to the Prime Minister containing allegations against a senior cabinet minister. Although he was not named, the article was about the Attorney-General Christian Porter. The ABC did not intend to suggest that Mr Porter had committed the criminal offences alleged. The ABC did not contend that the serious accusations could be substantiated to the applicable legal standard – criminal or civil. However, both parties accept that some readers misinterpreted the article as an accusation of guilt against Mr Porter. That reading, which was not intended by the ABC, is regretted.

Note the turn of phrase: the ABC said it does not accept the article suggested that the former attorney-general was guilty but regretted that “some readers misinterpreted the article as an accusation of guilt against Mr Porter.” In other words, the broadcaster strongly rejects the allegation that it regretted publishing the article, which will remain online.

Further, the ABC had this to say in a related statement:

The article was not sensationalist. It was an accurate and factual report on a letter that had been sent to the Prime Minister and two other senior politicians.

As can be seen, the ABC does not regret anything, and Porter is simply not telling the truth when he claims the broadcaster does. Indeed, the ABC does not even acknowledge that any serious mistake has been committed in that report by their journalist. And the editor’s note explicitly states that the ABC had and has no intention to suggest Porter has committed the alleged offence.

In another statement following Mr Porter’s comments, the broadcaster was even more specific (emphasis added):

The ABC has not said that it regrets the article. As we have stated, the ABC stands by the importance of the article, which reported on matters of significant public interest.

“The ABC stands by our investigative and public interest journalism, which is always pursued in the interests of the Australian community.

“The ABC stands by Louise Milligan, one of Australia’s foremost and most awarded investigative journalists, and all our journalists in their independent and brave reporting on matters about which Australians have a right to be informed.”

As can be seen, Porter had no right to claim victory when no such victory occurred. Instead, now we, the taxpayers, will ultimately pay the costs of Porter and the ABC’s legal counsel, who have been occupied with the mediation and defamation proceedings over the past few months. Regardless of the outcome of this lawsuit, a shadow will continue forever to be cast on Porter’s life and reputation.

The harm done never goes away, and there will be no final vindication nor any reversal of the calumnies or pain.

Augusto Zimmermann is a professor and head of law at Sheridan Institute of Higher Education in Perth, Australia. He is also president of the Western Australian (WA) Legal Theory Association, editor-in-chief of the WA Jurist law journal, and a former WA law reform commissioner (2012-2017)

This is lightly edited version of a column first published by the Epoch Times.