The Problem with Woke Women and Wimpy Men 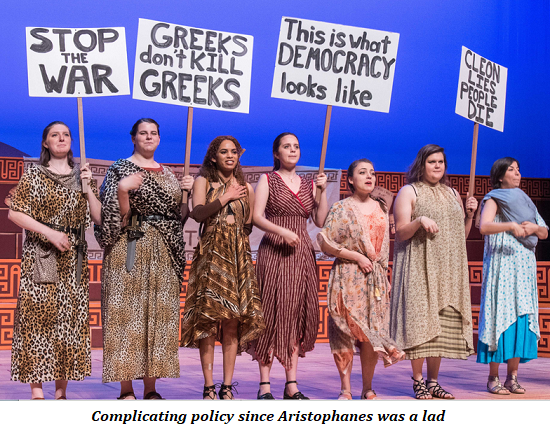 Matt Kean didn’t see the light in sacking Malcolm Turnbull before he’d begun his climate gig. He saw outrage among lots of (yet to be re-educated) Liberal voters. Kean belongs to the green-left of the Liberal Party. The Libs have a green-left faction? Perhaps not too long ago they didn’t. They do now. My local federal member, Trent Zimmerman, is among their number. Of course, excepting the odd holdout, the modern Labor Party is far gone.

I intend to vote for the Nationals as my new default. It is a question of voting for a mainstream party which is best holding out from going woke. Unfortunately, the Nats are tied to the Libs so eventually the whole lot of them will drift woke-wards and I will vote informal or maybe for Pauline Hanson’s or Fred Nile’s lot.

But as we know Scott Morrison, in tearfully shouldering the never-ending woes of modern Western women, is open to quotas. In fact, he is open to anything which he forlornly thinks will win him some votes, such as zero net emissions by 2050. Why he thinks he can make electoral inroads among ABC viewers and their ilk I have no idea. They loved Malcolm ever so much more, yet he didn’t win their votes.

Anyway, Ms Talacko thinks women are “more empathetic” than men. More giving, she claims. More motivated by passion. They care more about people, the community, the environment. This is sexist stuff. I’m terribly offended. But two can play at that game. Women have long fouled the political process in Western democracies through their voting pattern. Consider the US experience, where women obtained the vote in 1920 and immediately provided the winning margin for the passage of Prohibition. Al Capone and organised crime generally have been thanking them ever since. Goodness knows what they would do with more political power. Goodbye Western civilisation. Unless, of course, they are Mrs Thatcher-like; a very rare breed.

Women’s votes tend to be weighted more towards the left than are men’s votes. That’s apparently where their caring for others takes them. This has meant more left-wing governments creating messes in their wake, which have to be continually cleaned up by centre-right governments. Critically, it has now resulted in the election of Joe Biden and his radical puppeteers. Donald Trump won easily counting only male votes. What a cost is that of women’s suffrage.

Maybe America will survive Biden. It had better. All of our children’s and grandchildren’s lives depend upon it. Do Liberals, like Ms Talacko, even begin to understand what is at stake. Do they understand that an America crippled by affirmative action, untrammelled illegal immigration, and a switch to costly and unreliable energy will be no match for China? Do they understand that our freedoms and prosperity can be taken away?

Of course, there are many right-thinking conservative women and many deluded men. I am simply talking about averages. Women are a little more likely to be deluded than men, and often enough this produces severely damaging election outcomes, as it did last year in the United States.

But let me set the record straight. I am not all sure that this difference in voting patterns comes down to biological factors. It might well come down to the changing face of industry. How many voters laying bricks for a living are woke? Hard to find one, I bet. If you are on the lookout for woke greenies it would be better to look for men and women in suits in the inner city. Making things is grounding.

Unfortunately, those making things are far fewer in number, relatively speaking, than in days of yore. Even so, if you were to take a cross-section of men and women there would be many more men making and repairing things than women. That’s probably a better guide to voting than sex.

So, I’ll let women off the hook. I suggest that women bricklayers would be as unwoke as men bricklayers. To be really woke you have to have gone to university. And, as baffling as it may seem to feminists with a continuing axe to grind, markedly more of the ‘oppressed’ sex now attend university than do men; e.g., in Australia, in the US, in the UK. QED.

14 thoughts on “The Problem with Woke Women and Wimpy Men”

The ABC Flips Me the Bird

Distance is no barrier to our generosity