How the High Court Redefined ‘Absolutely’ 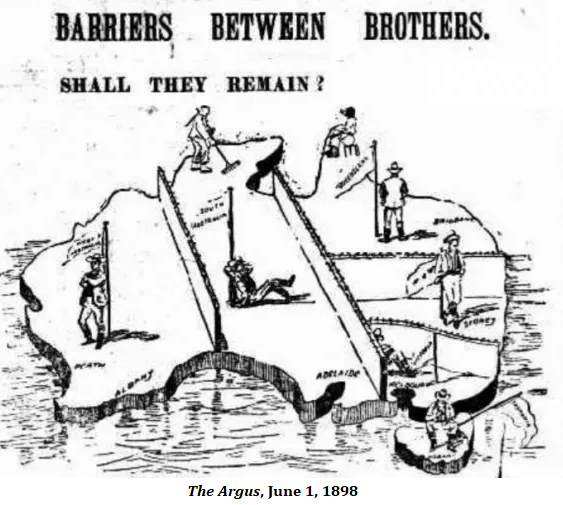 The High Court decided last November that Clive Palmer’s challenge to Western Ausrtralia’s border closure had failed. The five judges who headed this challenge produced four judgments that run to a total of 105 pages. The Court accepted that the Western Australian government could close the state’s borders on grounds that it did so based on a proportionality test. At paragraph 80 of the joint judgement, Chief Justice Susan Kiefel and Justice Patrick Keane stated:

… the defendant’s submission that there is no effective alternative to a general restriction on entry must be accepted.[1]

The facts involving the case read as follows. On March 15, 2020, the Government of Western Australia declared a state of emergency on grounds of a “pandemic”. On November 6, the High Court answered questions referred to in a case concerning whether the two pieces of legislation authorising the draconian measure, the Quarantine (Closing the Border) Directions (WA) (‘Directions’) and the authorising Emergency Management Act 2005 (WA) (the Act), were constitutionally invalid. The plaintiffs sought a declaration of invalidity because the Australian Constitution, in section 92, provides that ‘trade, commerce and intercourse among the States … shall be absolutely free’.

Section 56 of the Act empowers the Minister for Emergency Services to declare a state of emergency provided he is satisfied of the occurrence of an emergency and that extraordinary measures are required to minimise the ‘loss of life, prejudice to the safety, or harm to the health, of persons’. Section 67 relevantly empowers an authorised officer ‘for the purpose of emergency management’ during a state of emergency, to direct or prohibit the movement of persons into an emergency area. The closure of state borders were issued pursuant to paragraphs 4 and 5 of the Directions, thus prohibiting as from 5 April 2020 the entry of any person into Western Australia unless authorised by the State government (“subject of exemption”).

The closure of the state borders effectively violated section 92 of the Australian Constitution. The combined effect of these two laws unconstitutionally prohibited cross-border movement to Western Australia. Not only have they imposed a direct burden on the freedom of intercourse, but also a discriminatory burden with a naturally protectionist effect and, as a consequence, contravenes the freedom of trade and commerce also protected under the relevant constitutional provisions.

However, on February 24, 2021, in the case of Palmer v Western Australia, the High Court unanimously and in separate judgments discovered that the provisions of the Act authorising the Directions were actually “valid”. Although it accepted that section 67 of the Act effectively imposes a substantial burden on interstate intercourse, by reference to the purpose of the provisions on the declaration of a state of emergency and the making of directions, the Court found that the burden was justified and the provisions ‘did not infringe the constitutional limitation in s 92’.[2]

Section 92 of the Constitution informs that any interstate trade, commerce, and intercourse “shall be absolutely free”.  According to Chief Justice Kiefel and Justice Keane, such guarantee of absolute freedom ‘is not really absolute’ and it should ‘not be taken literally’.[3] Instead, they assumed the validity of laws which affect interstate trade, commerce and intercourse but whose purpose is allegedly not of a protectionist kind. In doing so, they argued that section 92 is concerned primarily ‘with freedom from unjustified burdens of a discriminatory kind’.[4]

Dr Anstey Wynes’s Legislative, Executive and Judicial Powers in Australia (1956) is broadly recognised as a classic treatise on the distribution of legislative, executive and judicial powers of the Commonwealth and the States under the Australian Constitution. Published in 1936, the first edition of this work ‘was rightly welcomed … as the first book of substance in the Australian constitutional field for some time’.[5] A book review of its fifth edition published in the Federal Law Review describes this important book as ‘the principal modern text and modern reference book for those concerned with what may loosely be called the ‘Lawyer’s Constitution’’.[6] I am only referring to this because Dr Wynes in his seminal book comments that ‘[t]he freedom prescribed in section 92 is not limited to freedom from legislative action, nor is sec. 92 limited in its application to the States’.[7] He goes on to remind us that, under the best rules of constitutional interpretation, the ‘absolute freedom’ prescribed in section 92 ‘is not limited in its operation to discriminatory laws, although any legislation or executive action discriminating against inter-State trade, commerce and intercourse, would be clearly invalid’.[8]

It appears to me, writing as a constitutional-law academic, that the intent of the Constitution has been grossly misrepresented. I am astounded to see how a judge may find the words conveyed in section 92 “unclear”. Of course, the words in section 92 are extremely clear. They effectively mean what is says: that any trade, commerce and intercourse among the States shall be absolutely free. It is rather elementary to conclude that the drafter intended that these things should be absolutely free of any governmental restrictions whatsoever. The reason section 92 does not refer to specifics is simply because it was not intended to be specific. It is meant to be a broader statement that any restriction, including the protection of persons from an alleged pandemic, is unconstitutional.

Of course, it is difficult to accept that these judges sincerely believe there was no other effective alternative to these draconian border restrictions. Professor Anthony Gray “respectfully” and “fundamentally” disagrees with this understanding. In an excellent article for the Western Australian Jurist, he convincingly argues that the idea of freedom of trade, commerce and intercourse within Australia was ‘absolutely fundamental to the creation of the nation and its foundations legal document’.

As Professor Gray reminds us, in a Constitution that is largely barren of express rights protection, section 92 is ‘a standout example’. ‘The vision of a unified, connected nation is clearly evident. It must be maintained’, he argues. Apart from the elementary fact that there were far more reasonable and effective ways to protect the safety of citizens during the COVID-19 “health crisis”, the purpose of having a written constitution ‘is to place certain values about the day to day exigencies’.[9] According to Professor Gray,

It is as if the Western Australian government believes that Australia is ‘merely a collection of self-governing fiefdoms, not a unified nation’.[11] When one reads the origins of section 92, it is patently clear that it was all about making Australia a united nation. The great “Father of the Australian Federation”, Sir Henry Parkes, would be totally appalled to see the Constitution he helped develop being so completely distorted. The reformulation of section 92 entirely contradicts the vision of Parkes, who stated at the First Australasian Convention, in 1891:

Australia shall be free – free on the borders, free everywhere – in its trade and intercourse between its own people; that there shall be no impediment of any kind – that there shall be no barrier of any kind between one section of the Australian people and another; but that the trade and the general communication of these people shall flow on from one end of the continent to the other, with no one to stay its progress or to call it to account…[12]

Sir Henry Parkes died in 1896, before the last two federal conventions. However, at the Adelaide Convention Debates, in 1897, the original draft previously supported by him was basically left unchanged. There was only a minor change in the draft clause, which referred to trade “throughout the Commonwealth” and not “among the States”. It was suggested that “among the States” was better a phrase than the broad phrase “throughout the Commonwealth”.[13]  The final result is the present provision to be found in section 92, which provides:

On the imposition of uniform duties of customs, trade, commerce, and intercourse among the States, whether by means of internal carriage or ocean navigation, shall be absolutely free.

As can be seen, the statement in section 92 is crystal clear and it entirely dispels any possible doubt about its effective meaning. John Quick and Robert Garran further elaborated upon all possible implications of the relevant provision. Quick played a prominent role in Federation movement and the drafting of the Australian Constitution. As for Garran, throughout the 1890s he was deeply active in the Federation movement as one of Sir Edmund Barton’s assistants, as a councillor of the Australasian Federation League of New South Wales, and as an organiser of the unofficial conferences supporting Federation at Corowa (1893) and Bathurst (1896).

When it comes to an understanding of the original meaning of section 92, surely there is no better source than Quick and Garran’s seminal The Annotated Constitution of the Australian Commonwealth. First published in 1901, in this authoritative commentary on the Australian Constitution, these celebrated authors elucidated the authentic meaning or purpose of section 92. According to them, an important question needs to be considered in connection with section 92 in order to grasp its full significance: What is absolute freedom of trade commerce and intercourse? In reference to this question, Quick and Garran replied authoritatively:

Absolute freedom of trade, commerce and intercourse may be defined as the right to introduce good, wares, and merchandise from one State into another, the right to sell the same, and the right [of citizens] to travel unburdened by State restrictions, regulations, or obstructions.[14]

Section 92 is written in relatively simple language to describe a basic concept that any trade, commerce and intercourse among the States shall be “absolutely free”. This is certainly not vague but the Western Australian government has chosen to violate the constitutional provision and the High Court has failed in its duty to uphold the Australian Constitution.

When one reads the authentic meaning conveyed in the explicit words of section 92, it is patently clear that the drafters desired to put this in simple English language so that no lawyer could ever misinterpret it. Of course, this has not stopped the High Court from ignoring the constitutional provision to the extent that these judges accepting the deeply controversial argument posed by the Western Australian government that there were no alternatives to the draconian closure of its State borders.

Therefore, Scott Morrison stands condemned in his appalling dereliction of duty to uphold the Australian Constitution. Sources from the government admitted the Commonwealth’s withdrawal from the case meant the Court was able to ‘dodge the question of the validity of the border closure directions’. Federal Attorney General Christian Porter actually confessed that removing the Commonwealth from this constitutional matter before the High Court was “unusual” but the Morrison Government had “listened to the WA government’s concerns”. ‘We acted on Western Australia’s request (not to intervene), and prioritised the need to work cooperatively with them during the pandemic’, he said.  Working cooperatively with the state government to undermine constitutional rights and freedoms, in other words.

This is simply appalling and it says a lot about the character of our politicians. The Constitution says in its Preamble that we ‘have agreed to unite in one indissoluble Federal Commonwealth’. However, it is now quite obvious that the intent of the Founding Fathers has been ignored by our political establishment with the endorsement of an unelected judicial elite. The High Court should uphold the challenge and we could then hold a popular referendum – direct democracy – that would allow the people to decide whether any amendments to the Constitution might be necessary.

This is not about Mr Palmer but whether we are still a united nation or not. Right now we are not.

[10] Chris Merritt, ‘High Court Ruling on Clive Palmer’s Border Challenge is a Step In the Right Direction’, The Australian, February 26, 2021, at https://www.theaustralian.com.au/business/legal-affairs/high-court-ruling-on-clive-palmers-border-challenge-is-a-step-in-the-right-direction/news-story/2b1f344ab1194d1a2a5eec0da859a8ae

9 thoughts on “How the High Court Redefined ‘Absolutely’”