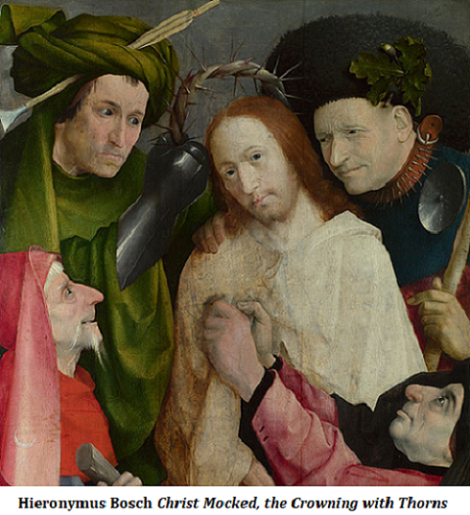 Back from a New Year break I found this in my inbox at the start of an email from a restaurant I used to go to: ‘Thank Christ It’s 2021.’

Am I wrong in finding this objectionable? At first I wasn’t sure why I did. It wasn’t because of the decayed epistolary standards: an announcement of that sort would once have begun with ornamental phraseology about ‘begging to inform our esteemed clientele’ and so on, but you can’t live in the past. Nor was it because the casual and dismissive use of the name of the figure whose birth some of us recently celebrated is anything new. Nor again is it anything to do with there being little to be thankful for in the arrival of a year in which we’ll see everything Donald Trump achieved wrecked by his senescent and dubiously elected successor or – and here the heart really quails – the Morticia Addams-visaged Kamala Harris, and will have to face the fact, which seems to have been largely disregarded so far, that thanks to the Chinese and their virus we are much poorer than we used to be and have huge debts to repay.

No doubt this year will also bring us more wars, more riots, more obsession with ‘identity’ and less individual freedom. No, nothing to look forward to in that; but that’s not why that email rankles.

The email is offensive, I have decided, because it was not an expression of thanks at all. The name Christ had been gratuitously commandeered to confer a frisson of attention-grabbing edginess on the announcement that followed – too late in my case – that for new year the restaurant was offering ‘a relaxed French-Morrocan’ [sic] barbecue (though why you’d go to a restaurant for a barbecue is a mystery, unless perhaps you were so over the season of festivities you didn’t have the energy to turn on the bottled gas in your own backyard).

It is a truism that the restaurateurs would never have dared write ‘Thank Muhammad’ in such a context. If they’d done so, it’s a safe bet they’d soon find themselves without a restaurant, or worse. Anyway, thanking Mohammed doesn’t come naturally in our Anglo-derived society, doesn’t have the demotic linguistic force that, despite the unthinking way it is generally employed, the invocation of Christ’s name still has. No, what this email demonstrates for the thousandth time is the blithe disregard for Christian sensibilities shown by vast numbers of citizens of a country in which to offend anyone else is now so heavily proscribed as to be in some cases a criminal offence. Try making a disrespectful reference to Aborigines, or women, or the ‘trans’ lobby, and see where it gets you. But you can say what you want about Christians and Christianity. No one in authority could care less and Christians themselves, given that funny injunction in their faith about turning cheeks, never hit back.

The Deity, of course, is constantly on people’s lips for every purpose except that of worshipping Him, from the ubiquitous ‘Oh My God’ – I’ve heard this shrieked in public by teenage girls wearing the uniform of a posh Roman Catholic school – to the vapid ‘Thank God it’s Friday’ uttered with an exaggerated sigh as though the utterer had just surfaced from a week down a coalmine. That kind of speech, regrettably or not, is part of the contemporary vernacular. But Christ is special, and to Christians the irreverent use of that name jars a lot more; in other words it can offend. I suspect the writers of the restaurant email were perfectly aware of that but either didn’t know or didn’t care whether there were any Christians on their mailing list to be offended by it.

Coarse speech is as old as language. What has changed is that the decline in manners and the decline of religious observance – two phenomena that are probably connected – has obliterated the distinction between the vulgar and the polite. Language once considered unacceptable in public is now the norm, especially if it’s about sex or religion. Television has blazed a trail here. ‘Your’ ABC, for instance, never tires of having its ‘comedians’ or characters in its tedious attempts at drama refer to God or Christ in some expletive-tainted phrase. The ABC is scrupulous, when anything supposedly offensive to Aborigines is coming up, in interpolating an unctuously-voiced ‘warning,’, but never feels obliged to warn Christians when a torrent of blasphemy is on the way. 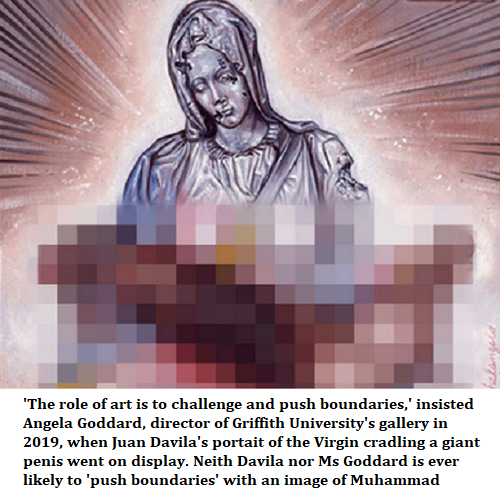 Though it presumably imagines itself to reflect our national ‘diversity’ you get the impression the ABC regards Christians as just a few worn threads in that multicultural tapestry, hardly worth bothering about. It long ago ditched Sunday morning service and its one remaining sop to religion, the excruciating Compass, is replete with leftist modishness. Of course the ABC quickly rediscovers Christianity when the churches can be presented in a bad light, as when some cleric is accused of child sex abuse. That’s when it reveals the bias we’re always told it doesn’t have. Can anyone believe it would have pursued Cardinal George Pell with such fanaticism if he’d been a top mufti or ‘chair’ of the Rainbow Alliance?

In the space of a few years, Christianity – its presence still visually but misleadingly solid in the great metropolitan cathedrals – has declined from unofficial state religion to an uninfluential minority whose beliefs, especially on moral questions, the state in general now ignores. The Piss Christ affair at the Victorian National Gallery in 1997 was perhaps the first big sign of change. Christian protests about display of an ‘artwork’ consisting of a crucifix immersed in urine were scornfully brushed aside (and no, they wouldn’t have dreamed of dunking the Prophet). Since then it’s been downhill all the way for the churches. In the same state of Victoria, Daniel Andrews is slipping a law through his supine parliament that forbids praying, if the prayer is for someone who wants to ‘convert’ from gay to straight (odd how no one seems to want to convert from straight to gay). How does that square with all that blather from gender tinkerers about choosing your own sexuality?

Statistics and everyday observation show that the future of Christianity in Australia is far from rosy. Christians are more liable to be mocked than respected. Semi-pagan beliefs about Gaia are filling the vacuum of faith. We can already see that, along with our belief in our religion, we have lost our belief and our pride in the uniqueness and, yes, superiority of our culture. That way lies extinction. Thanks for 2021? Not specially.

Christopher Akehurst is a frequent contributor

Carmen Get It! The PC Opera

When Betrayal is a Core Principle