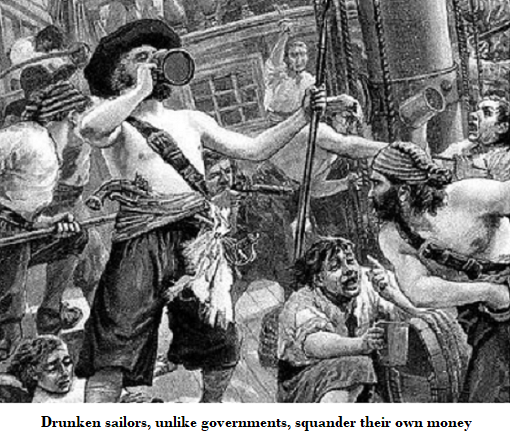 One of the defining issues in Australia’s federal elections since John Howard’s government was defeated in 2007 is the state of the budget. After its GFC spendathon, Labor under Kevin Rudd and Julia Gillard chased a surplus. Wayne Swan kept promising its imminent appearance. Alas, it kept disappearing in a puff of smoke, leaving Swan chronically battered and bruised, politically speaking.

Tony Abbott, Malcolm Turnbull and Scott Morrison continued the pursuit. And at last, with gasps of relief, it was within Morrison’s grasp. Yikes! It was not meant to be. COVID-19 snatched it away as effectively as it snatched away the presence of mind of the worldwide political class; except, perhaps, for Stefan Löfven, Jair Bolsonaro and Alexander Lukashenko.

The rest suffered COVID derangement syndrome (CDS), characterised by a propensity to inflict national self-harm by closing down viable businesses, throwing people out of work, and keeping healthy young people, even schoolchildren, captive in their homes. This, unsurprisingly, turned out to be very bad for budgets.

In the last federal budget update (January 2020) before CDS hit, a small surplus was forecast for 2019/20, building to larger ones in the immediate years ahead. In case it becomes lost in the mists of pre-COVID times, here is what was said:

The budget remains on track to return to surplus in 2019‑20 for the first time in 12 years, with strong fiscal discipline ensuring surpluses build over the medium term…The underlying cash balance is expected to improve from a broad balance of ‑$0.7 billion (0.0 per cent of GDP) in 2018‑19 to a surplus of $5.0 billion (0.3 per cent of GDP) in 2019‑20. Looking ahead, the budget is expected to be in surplus across all years of the forward estimates and continue to build to over 1 per cent of GDP in the medium term. Over the four years from 2019‑20, the cumulative underlying cash surplus is expected to be $23.5 billion.

Trillions have a whole different feel to them than mere billions. Obama had three planes deliver $1.7 billion in cash money to the Mullahs. Think about how many planes he would have needed to deliver $1.7 trillion. Three thousand according to my back-of-an-envelope calculation. Though, I suppose, he could have used vacuums bags to squeeze the notes together to cut down on planeloads. I digress.

Do deficits and debt matter? I switched at the end of Sky News’ coverage of the budget to the ABC’s, which was ongoing. Chris Richardson (Deloitte Access Economics) appeared. He offered reassurance that while debt was high and growing, low interest rates made it manageable. This is a common enough view. And, to my mind, it has validity. You might be surprised that I haven’t taken the opportunity to rubbish Richardson’s assessment. There it is, I am more well-rounded than people think.

Of course, if debt hangs around long enough, interest rates may rise and cause servicing problems. But this seems unlikely, at least in the foreseeable future. What the situation will be in ten years’ time and beyond is a mystery inside of an enigma. And there is no point in speculating. Though the IPA has, and thinks debt will peak in 2045 at over $2 trillion. My interest in 2045 is purely transcendental.

Budget deficits are a real problem when economic times call for governments to step out of the way and let the private sector rip. They either cause interest rates to rise which can stymie economic development or, if monetised, they can result in inflation. These are not those times. Incidentally, if governments kept their spending and regulatory overreach reined in as a matter of normal course, we would seldom be in circumstances in which the private-sector economy was not either buoyant or promising to be. But that is a story for another day.

Today, desperate economic times have been wreaked by government. Economic theory can’t help. There is no theory to cover governments locking down their economies. Chapter 13 of Samuelson’s economic textbook dealing with lockdowns is missing. But, having locked down their economies, sheer common sense says that governments must spend money to prevent gangs in the streets and insurrections. Therefore, they do and, at the same time, claim credit for their competence and compassion. Self-reflection isn’t their strong suit.

So, given the backdrop, have Scott and Josh got it right? I have no idea. Bear in mind, the budget numbers are guesses anyway in today’s unprecedented circumstances. Ten billion here, ten there. What is clear is that the government has been loosed from fiscal rectitude. Anthony Albanese’s budget-reply speech hardly criticised the government for over spending. I could only count increases; e.g. on childcare, public housing, and infrastructure

These are indeed golden times for governments. Locking down economies, destroying businesses, livelihoods and wellbeing, is commonly met with the withering charge that they aren’t being hairy-chested enough. Spending unheard of amounts of borrowed money is being too stingy. It’s like going on a bender and being chastised for not finishing off the scotch.

Those pillars of rectitude, central bankers, are in on the act. Philip Lowe, governor of the Reserve Bank, urges all governments in Australia, federal and state, to take advantage of low interest rates and to borrow and spend on infrastructure and job creation. He told the government in August that the states should double their stimulus spending. He’s at one with Steven Kennedy, head of Treasury, who believes that fiscal policy will be more powerful in the current circumstances: “It is highly likely that fiscal multipliers are larger when interest rates are near zero and are expected to remain there for the foreseeable future … the usual crowding-out features of fiscal policy are much less pronounced,” he told a Senate committee in July.

Finance minister Mathias Cormann is pushing the states to spend more. He was reportedly unhappy at the prospect that the Western Australian government would bring down a surplus budget; which it duly did on October 8. By the way, this doesn’t mean the WA government is not spending big; it means it is awash with royalties due to the high price of iron ore.

So, there it is: everyone who’s anyone is onboard. Keynesians to a man and woman. What can possibly go wrong? Wrong question. ‘What should be done?’ is the right one. That comes down to completely opening up the economy and reducing regulations, including those which delay mining projects for years on end. Nothing doing.

The prospects are unpromising. As it is, the budget figures are made contingent on a vaccine being available next year. Presumably, without a vaccine, the government is wary of state premiers continuing to act moronically at the hint of an infection or two. On the evidence, a sound caveat.

What Will Malcolm Do Next?