Rationality Vanishes in a Viral Fog 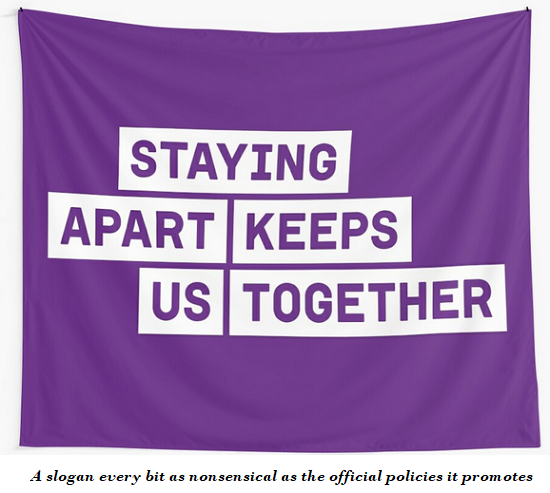 There are many unknowns and uncertainties about the current viral pandemic, with most definitive answers are still for the future. Some questions have been with us for months. Do total lockdowns achieve anything? Do masks work? Why do some countries have so many deaths while others see relatively few? Other questions are more current. Is it over? Is there a second wave? If so, why are there so few associated deaths, relatively speaking?

Much of the information we are given is difficult, even impossible, to evaluate. For instance, in recent weeks Victorian Premier Daniel Andrews has been daily announcing the number of new COVID-19 deaths, almost all invariably elderly people in aged-care facilities. When there is a death in a younger age group, much is made of it. Further investigation, as with the recent man in his twenties who was announced as a COVID victim, stronly suggests co-morbidities at work. In that particular case, according to The Age, the victim may well have died of an overdose. Nevertheless, the ruinous restrictions remain in place and the cry remains, ‘We must continue the lockdown!’

But what do those deaths actually mean? In the first instance, we’ve recently been told that many of these   people died with COVID-19, not necessarily from it. Many people who died had other serious illnesses and, while the virus might have hastened their end, it might not have contributed at all. We just don’t know.

The dilemma is deeper than this, however. A little less than 40,000 Victorians die every year. Some 65 per cent, about 26,000, are over 70. That’s about 2200 deaths per month and around 70 per day. Are the deaths Andrews cites part of that ‘normal 70′ or are they additional? These distinctions don’t lessen families’ grief, but they are important if we are to understand what is really happening.

It is precisely these points of scientific detail and distinction that are the focus of a recent, very informative analysis by Ivor Cummins, an Irish biochemist. Since 2012 Cummins has been researching and publishing about the underlying causes of modern chronic diseases and the nutritional and lifestyle changes that can mitigate their effects. He published Eat Rich, Live Long in 2018 and has posted extensive material on his website thefatemperor.com. In 2020 Cummins turned his considerable compilation and analytical skills to the SARS-Cov-2 pandemic.  My introduction to his work was the YouTube presentation embedded below, and this article is written to alert others to this information.

I am not a biochemist, but my long experience on scientific and historical research projects suggested I was looking at thorough and insightful work. More than once, I was moved to exclamations of surprise and admiration for the way a seemingly complex and confusing point was made simple and clear.

Below are a few of the Cummins points, all of which he illustrates with very clear diagrams and graphs.

# The number of excess deaths above the long-term average is what matters, not the gross number. Analysis of European mortality data (EUROMOMO database) shows that ‘excess’ deaths of 180,000 occurred in the winter season of 2020 during the pandemic. While a large number in itself, it was only 40,000 more than in 2018 and less than in 2000, offering a less alarming perspective on the impact of the virus.

# EUROMOMO data show that the death rate overall in Europe in the summer season of 2019 was statistically anomalously low, meaning that more elderly people survived into the winter of 2020 than usual. These are known rather bluntly in the trade as ‘dry tinder’ and many quickly succumbed to the virus during the winter.

# A major contributor to the global paranoia was the grossly inaccurate predictions of COVID deaths and the sensationalist reporting by most of the media, terrifying the public and driving the political leaders to draconian and ill-advised actions that destroyed economies, thousands of businesses and lives.

# Regarding total lockdowns, suffice to say that something of the order of 500,000 people passed through Irish pubs in July/August, with no masks, and there is not the slightest blip on the declining death-rate curve.

# The activity of the virus is seasonal, related to humidity, temperature, ultraviolet and other factors. In northern temperate zones the narrow active period is during the winter, essentially December through April, as was manifest in Italy, for example. In contrast, southern tropical zones show almost year-long activity but with a broad peak in May through September, as we now see for Peru and Brazil.

# This seasonal variability explains some of the perplexing distribution pattern for COVID-19 cases in the USA, mistakenly called a ‘second wave’. The NE regions, such as New York, experienced the COVID-19 spike in winter, similar to Europe. But the Southern USA is a more tropical climate and, correspondingly, has peaked in the recent warmer months. The USA shows this double ‘hump’ in influenza cases every year. It is not a second national wave.

# The recent surge of new cases in many European countries is also being called a second wave and has created new hysteria, even though there has not been a commensurate surge in deaths. What is occurring in most cases is detection by ongoing PCR testing (polymerase chain reaction) of viral fragments, dead virus, asymptomatic people and such. PCR testing does not identify the live virus and positive PCR tests should not be labelled as ‘new cases’.

# Cummins calls this second peak a ‘casedemic’. It is now the cause of considerable anxiety and restrictions in countries such as Great Britain, Spain, Switzerland and Germany. An increase in deaths in Spain is probably just the normal season variation and, at 1 death per million people per day, is not exactly a surge. This same pattern was observed when PCR testing was introduced after the 2009 H1Ni (Swine flu) epidemic. Then too media sensationalism drove paranoia in the population – even though there was no associated increase in deaths.

No doubt parts of Cummins’ analysis will come in for criticism and correction as time and more data are available and incorporated. That is how science is supposed to work, as opposed to the ‘no deaths on my watch’ political theatrics we are seeing in Australia.

What is desperately needed in Australia is a Cummins-like analysis on a national basis and for each state, showing death rates per head of population correlated against seasons, age of victims, location of victims, timing of personal and business lockdowns and closures, introduction of masks and border and regional closures.  Australia is a different setting to Europe and the US and the impacts here reflect that.

Our leaders need the best science available to guide their decision-making. That doesn’t seem to have been the case to date. We need that better science too, to let us judge what they’re doing.

It’s Time to Rethink Everything … and Quickly