The ‘Sneaking Regarders’ and Their Boundless Hypocrisy 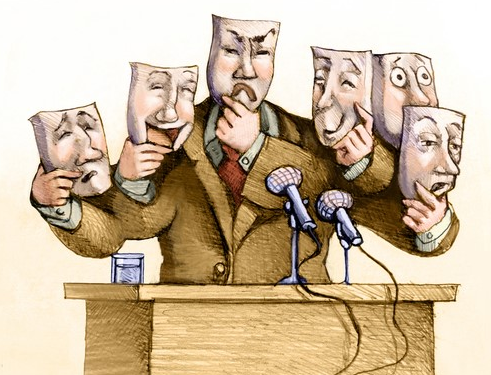 Hypocrisy is a normal but irritating aspect of human behaviour. We’re all hypocrites to some extent, but true hypocrites are almost admirable in their chutzpah because, unlike hypocrites who are caught doing what they try to hide, real hypocrites are outraged by vices which they themselves do in public. Their hypocrisy is so blatant that, after a while, nobody notices – it fades into the background like muzak in a shopping centre.

Religious leaders who condemn homosexuality or extra-marital sex are ridiculed when they’re caught enjoying the sins they rail against. People, though, who secretly indulge in behaviour they publicly condemn are not the worst type of hypocrite. A more blatant form is condemning the behaviour of people with whom you disagree while condoning the same behaviour from people who share your ideology. In other words, the worst hypocrisy is not that of human weakness, but deliberate, selective hypocrisy, which is deceptive and misleading, and which is intentionally designed to further a cause. This is especially true in relation to politics, particularly hypocrisy related to human rights. The extraordinary double standards of those who depict the presidency of Donald Trump as a dystopia of human rights abuse, while simultaneously remaining mute or, worse, putting in a good word for China’s torturers, organ harvesters and murderers, and who pose, and are accepted, as defenders of the oppressed, is one of the mysteries of modern culture.

Hypocrisy, though, has mutated to a higher level and grown exponentially since Donald Trump announced his candidacy for the presidency. We would have to return to the Cold War to see hypocrisy on the scale of the last few years, although many people, to be fair, thought it would be impossible to beat the lunatic commentary that surrounded the George W. Bush administration. A lesson of recent history, one I thought would not be forgotten, is that those who make hyperbolic claims about Nazism coming to America should be treated with the contempt they deserve. The sort of people who made those claims should have been banished to the political wilderness as either idiots or ideologues with no credibility.

This has not happened. The usual suspects, who have never seen a left-wing dictator they didn’t adore, are describing the Trump presidency as the end times. To put some perspective on current American politics, Donald Trump is no better or worse than other politician. If he loses the presidency in November, it’ll take me, and most people, 30 seconds to start thinking about pizza, or how modern music lyrics are crap, or how nobody researches what they post on social media. In other words, it won’t be the end of the world.

Trump’s presidency, viewed historically, will be rated both a success and a failure, or, to refine my analogy further, his legacy will be no better or worse than other liberal democratic politicians. He will, though, to his credit, have a better record than many heroes of the left, like Yasser Arafat or Daniel Ortega, who jailed, tortured and murdered their opponents. Or Hugo Chávez who drove the Venezuelan economy to ruin using the same economic principles left wingers criticise liberal democracies for not adopting — and which have left the Venezuelan people impoverished and without the basic necessities of life.

Trump, when his political career ends, will not be morally bankrupt like the many apologists for Castro’s Cuba, who claim that the Caribbean despotism’s medical system is world class, which is simply not true, because the Cuban government does not allow independent verification of its health-care statistics. Nobody with a shred of decency defends fascism by claiming that the trains ran on time, or that Hitler’s record in reducing unemployment mitigates, in moral terms, the wholesale mass slaughter that was the hallmark of Nazism. Castro’s regime murdered tens of thousands, confined homosexuals to concentration camps and imprisoned librarians. Diverting attention from mass murder by extolling the virtues of the Cuban health system is an obscene lie crafted to defend the indefensible. ‘We murdered your family but we do have an excellent oncology department’ is an argument that only the wilfully naïve or the ideologically stupid believe lessens the evils of mass murder. To put this claim in perspective, many countries have better medical care than Cuba and they have not murdered their citizens. Trump will not be morally bankrupt like the defenders of Palestinian terrorism or Islamic fundamentalist terrorism, who believe that murder is a legitimate response to the perceived sins of the liberal democratic West – or who defend people who murder Jews because not every inch of the former Ottoman Empire is Muslim.

And before anyone uses the specious argument that democracies have diplomatic relations with autocratic regimes: there is a difference between realpolitik, where engaging with human-rights-abusing regimes is the lesser of two evils, and being an apologist for regimes that torture and murder political opponents. All of us, in our everyday lives, deal with people who we, in better circumstances, would cross the road to avoid. We engage with these people solely as a necessary evil. But we don’t defend their behaviour as evidence of their superior morality. We don’t hold candle-lit vigils celebrating the life of Yasser Arafat, as did Ireland’s president, Michael D. Higgins upon the death of the leader of the Palestine Liberation Organisation, one of the inventors of modern terrorism.

Hypocrisy, as Rochefoucauld said, is the tribute that vice pays to virtue, which is why so many socialist ideologues use the rhetoric of democracy and human rights to divert attention from their true agenda. It’s easy to draw a false equivalence between the problems that free people face in a democracy and the human rights abuses that are a constituent part of criminal regimes. Obscurantism, though, from apologists for human rights abuses is an intolerable indulgence when people are being tortured and murdered by the partisans of ideologies inimical to human freedom.

Defending criminal regimes which reject democracy makes their advocates complicit in human rights abuses. It’s one of the strengths of liberal democracy that, unlike the criminal regimes and terrorist organisations defended by the morally reprehensible, democracies don’t jail, torture or execute people who criticise democratically elected leaders or their policies. I say this as a reminder that saying ‘grab them by the pussy’ in a private conversation, subsequently leaked, is nowhere near being in the same league as turning a blind eye to murder.

The hypocrisies of Trump’s critics, along with a compendium of their crimes against reason and decency, would fill a bookshelf, perhaps even a library. Every democracy has people who are fellow travellers of tyranny, or ‘sneaking regarders’, to use an Irish term which describes people who admire political violence, especially terrorism, but who are too sheepish or full of guile to state their admiration publicly. It’s about time, though, these people are called out for what they are: apologists for what they pretend to abhor.

I write this knowing that making an argument about the hypocrisy of the virtue-signalling left won’t make a shred of difference. When the next Republican president is elected, the usual dictator-worshipping true believers, who claim without the semblance of a blush that Trump’s presidency is the end of the world, will resort to the same overblown rhetoric about fascism coming to America.

In other words, the business of hypocrisy as usual.

The not-so-shocking truth about FDR

Brexit and the Camel’s Nose