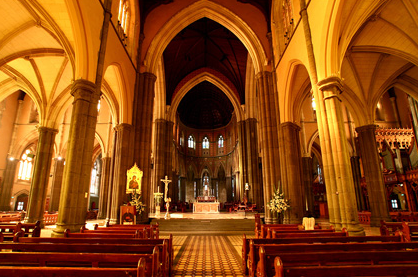 The first of the two incidents that convicted Cardinal George Pell of sexual abuse of two choirboys supposedly took place after a Solemn Sunday Mass in St Patricks Cathedral, Melbourne, in December 1996. The choirboy who complained about Pell said he and a friend were abused in the priests’ sacristy of the cathedral shortly after they left the exit procession at the end of the Mass. The priests’ sacristy was the room in which then Archbishop Pell was assisted to robe before the Mass, and to disrobe afterwards. Concelebrating priests who took part in the Mass also robed and disrobed there. It was the room to which altar servers returned sacred objects used in the Mass. What remained of the sacramental wine was returned there, and the cash from the worshippers’ collection was deposited in its vault. It was out of bounds for choirboys. However, shortly after the procession, the choirboy and his friend allegedly found the sacristy unlocked and empty and went inside to swig the sacramental wine, when Pell suddenly appeared and assaulted them.

In my most recent piece for Quadrant Online, I showed that the submission by the Victorian Director of Public Prosecutions in answer to Pell’s pending appeal to the High Court contains an argument originally put to the jury by Crown prosecutor Mark Gibson at Pell’s trial, but which the trial judge ordered him to retract. The offending argument was that the priests’ sacristy was empty at the time the choirboys found it because altar servers from the exit procession, who had arrived at the sacristy a little earlier than the boys, had quickly left it and gone to the nearby utility room in order to provide a five-or-six-minute ‘interval of decorum’ or ‘private prayer time’ for worshippers still in the cathedral after the Mass.

In his retraction to the jury, Gibson acknowledged there was no evidence given at the trial about where or when the altar servers might have gone after they allegedly left the sacristy. Despite his retraction, the same argument reappeared on January 31, 2020, in the submission to the High Court by the Director of Public Prosecutions. One of its four signatories is Gibson himself. It is complete with footnotes referencing trial evidence that, on closer inspection, turn out to be at best dodgy, and at worst bogus. These details are in my Quadrant Online posting on February 9.

Now, without the existence of the ‘interval of decorum’, that is, the hiatus in the post-Mass proceedings for ‘private prayer time’, the credibility of the choirboy’s claims about being assaulted in the priests’ sacristy over a five-to-six minute period would have been very difficult to argue. More than twenty witnesses for Pell at the trial revealed so much detail about what happened in the cathedral after each Sunday solemn Mass that it must have often appeared to the prosecution there was literally no time when the abuse could have taken place. But prosecutor Gibson seized on one apparently insubstantial piece of evidence by the cathedral’s sacristan, Max Potter, and turned it into a trump card.

At Pell’s trial, Potter mentioned that immediately after the end of a Mass he normally waited five or six minutes before going to the sanctuary — that is, the area around the altar, not the priests’ sacristy. He waited five or six minutes to be sure the whole procession had gone down the cathedral’s nave and out the west door. And during the same five-or-six minute period, Potter said, some people would be walking up to the sanctuary area, or kneeling near it, saying their own private prayers. In other words, the five-or-six-minute hiatus that later assumed such significance in convicting Pell originated in this comment by Potter.

In its original form it was not a five-or-six-minute hiatus that occurred later in the post-Mass proceedings, that is, after the altar servers and the choirboys had finished their procession and gone to the sacristy. And it was not a hiatus that affected anyone at all at the scene of the alleged crime, the priests’ sacristy. It was just a courtesy for the worshippers in the cathedral who had approached the sanctuary to pray. Here is the transcript of the relevant part of Potter’s examination by Gibson:

Mr Potter, can I ask this question. Once mass finishes and the procession commences down the nave towards the western door, once mass finishes and the procession commences, how long is it before you first attend the sanctuary to start doing what you’ve just told us? — Could be five minutes. I make sure that the procession’s cleared from the cathedral first. That the whole procession’s moved through. And people will be walking up to the sanctuary area kneeling, so we didn’t disturb them for that five or six minutes, we gave them their private time and then we would move in after that.

Now, this is quite clear. Potter is talking about a hiatus that begins ‘once Mass finishes and the procession commences’. He makes sure that the worshippers are not disturbed ‘for that five or six minutes’. And while he is giving them this ‘private time’, he is also checking to see when the last of the procession leaves the cathedral through the west door. Only then does he go to the sanctuary to perform his duties there. The ‘private time’ does not begin after the procession goes through the cathedral’s west door. It begins immediately the Mass has ended.

This is a critical point which the majority judges in Pell’s first appeal in Victoria, Anne Ferguson and Chris Maxwell, get wrong. They misread Potter’s evidence:

His [Potter’s] evidence was that, after the choir and clergy had processed to the west door, he would go to the sanctuary, where he would wait until parishioners had finished what he called their ‘private time’ for prayer after the service. This was typically a period of five or six minutes.

However, Potter did not say he waited for five or six minutes in the sanctuary ‘after choir and clergy had processed to the west door’. He was responding to Gibson’s question about ‘before you first attend the sanctuary’, that is, in the interval between the end of the Mass and his going to the sanctuary, and what he does about the few worshippers still engaged in private prayers. Potter replies that he allows them a five-or-six-minute prayer time and he does this while the procession is still on its way towards the west door. The private prayer time starts at the same time as the exit procession, and both finish at the same time, about five or six minutes later.

This point is critical because if it is accepted, the whole case against Pell falls apart. During the first five-or-six minutes after the end of Mass, the two choirboys are not in the priests’ sacristy, they are still in the exit procession, as the choirboy himself attested several times under various examinations in both commital hearings and the trial. The boys only leave the procession after it comes to a halt outside the rear gate of the cathedral. The procession takes about six minutes from start to finish and the two boys remain part of it until the choir starts to enter the cathedral’s rear gate, when they allegedly turn back and go into the cathedral’s south transept door.

In Gibson’s hands, however, this five-or-six-minute hiatus is transformed into something that began not immediately after Mass but five-or-six minutes later, after the exit procession had ended. He also quietly shifted its location from around the sanctuary to the priests’ sacristy, where the choirboy said he had been abused.

Despite being forced to retract his claims to the jury about when the private time occurred, and where the altar servers and others in the priests’ sacristy went during this time, Gibson managed to persuade the jury and the appeal court that ‘private time’ did not begin immediately after Mass, as Potter said, but was something that took place only after the altar servers had arrived at the sacristy, put down their liturgical items, and then went somewhere else for the next five-or-six minutes, leaving the sacristy empty.

Moreover, despite the unchallenged evidence of several altar servers and choir officers themselves (Connor, McGlone, Finnegan and Cox) that, once they reached the priests’ sacristy, the ‘hive of activity’ would begin there straight away, Gibson managed to persuade judges and jury to ignore this evidence and believe his version of the timing and location of the post-Mass activities.

This was an audacious manipulation of the evidence but Gibson managed to bring it off. And although called upon at the trial to retract the central part of the story because it had no basis in evidence, Gibson still managed to convince the jury to see things his way. It is one thing to persuade a jury to accept a warped view of the evidence in a case with so much intricate detail, but it is quite another to persuade a majority of judges on the Victorian Court of Appeal to make the same blunder. Gibson must have felt very lucky, and probably very surprised, that he got away with it.