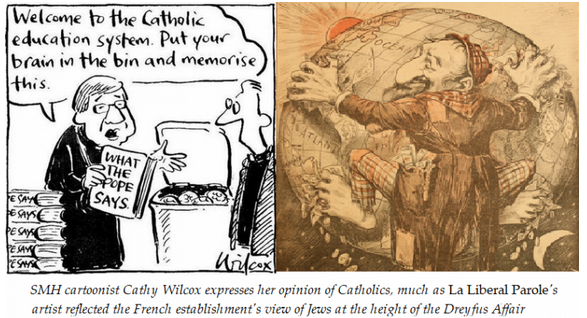 The new legal year began this month with various ceremonies, among them the traditional celebration of a “Red Mass” in the Roman Catholic cathedrals of the state capitals. In Melbourne, the judges and lawyers who attended St Patrick’s must have pondered the strange combination of circumstances that have made that imposing Gothic building the alleged locus delicti of Australia’s most publicised and divisive legal case in living memory; and have seen Cardinal George Pell, the prelate whose archiepiscopal seat the cathedral once was, convicted for child sexual abuse – offences committed, it is said, in a sacristy just across the transept from the assembled jurists participating in the Mass.

The Pell case is one of those indicators, like climate change, of where one stands politically. The Left is pretty much anti-Pell en bloc, not so much for any privileged access to evidence, but because he is a conservative, someone who can therefore do no good – just like President Trump, who even if he could somehow fulfil the leftist dream and abolish “global warming” overnight would get no thanks for it. Those who have publicly stated their belief in Pell’s innocence tend to be conservative (Pell’s two most eloquent champions have been Keith Windschuttle, Editor-in-Chief of Quadrant, who has dissected the evidence with a forensic skill unusual even in the highest levels of the legal profession, and columnist Andrew Bolt) but they believe him not because of shared political or other views but because conservative thinking requires good reasons for its conclusions and is not swayed by shallow emotionalism and the shouts of the mob, and the evidence adduced against Pell is about as far from conclusive as any evidence accepted by an Australian court could ever have been.

On March 11, the full bench of the High Court will come together to hear the long awaited appeal by Pell, former Archbishop of Melbourne and Sydney, then cardinal in charge of reforming (i.e. cleaning up) the finances of the Vatican, now prisoner no. CRN 218978 at Barwon, Victoria. When it does, the hearing will push whatever is obsessing the media at the time – coronavirus, the horrors of a Trump re-election, the collapse of the British economy after Brexit (that’ll be the wishfully thought-up fake news from the Nine media and the Guardian) off front pages round the world.

To be precise, the court will not actually hear an appeal by Pell, but as the ABC puts it, “The High Court will rule on whether Pell has the right to appeal at the same time as it hands down its decision on whether or not his appeal has been successful.” Deconstruct that as you will, if the court gives the thumbs-down, Pell will stay in prison for what could be the rest of his life. He’s 78 and his sentence runs until 2025. In March he will have served a year.

The hearing date was announced early this month, nearly two months after the court agreed to hold the hearing at all. One wonders why it has taken so long. What are Their Honours so busy with that they could not have heard the case by now? Surely our efficient twenty-first-century superior court is not as clogged in its workings as the High Court of Chancery in the bad old days satirised by Dickens in Bleak House. After all, haven’t the wigs and other paraphernalia of yesteryear been dumped for a new streamlined image to distance the modern High Court from those fusty old courts of the past? (an image, by the way, that has the effect of making the judges look American, as though they were in an episode of Judge Judy. Why not adopt the gavel too?)

There may be sound reasons why urgency is seldom a factor in legal processes, but surely an effort could have been made to speed things along in the case of a man who might die in prison for a crime he quite possibly did not commit. The opposing parties have had their arguments ready since last month. Pell’s legal team filed their submissions on January 3, the Victorian public prosecutions office on January 31. The hearing is expected to take only a day. So it ought not to have been a herculean task to arrange on compassionate grounds that Pell be spared another month of the misery of not knowing his ultimate fate.

Whatever you think of Pell, a sentence of six years seems a pretty cruel one for a conviction based on a single witness’s uncorroborated recollection of something alleged to have happened 24 years ago. The Cardinal is not only in prison, he’s in solitary confinement. According to The Australian, Pell is kept in isolation for 23 hours each day, “because, due to his age, high profile, and the nature of his crime, he has been designated an ‘at-risk’ prisoner by corrections officials.” It’s a bit harsh that he has to be kept from human company because the ridiculously corporate-sounding “Corrections Victoria” can’t guarantee to protect him from those other of its “clients” who, in that strange moralistic way some prisoners have, regard other crimes, especially child abuse, as more heinous than whatever they’re in for themselves, and take it upon themselves to hand out extra punishment – but that’s the penal regime in Daniel Andrews’s socialist state for you. It couldn’t protect drug dealer Tony Mokbel from being stabbed nearly to death in May last year in the same “maximum security” prison; nor, during the Brumby Labor government, could the Victorian prisons administration save murderer Carl Williams from himself being murdered.

Still, one wonders if the solitary confinement isn’t as much to make the sentence heavier for Pell as to “protect” him, an additional turn of the thumbscrew so to speak. It’s but one of several extra humiliations inflicted on him, such as the handcuffs when he’s brought to and from a court. Who decreed that? Who decreed that he can’t fulfil his priestly obligation to say Mass because he’s not allowed the wine? And what spiteful misanthrope decreed (I owe this information to a private source) that letters to Pell in gaol are not passed on or even returned to sender if he is addressed on the envelope with his title of Cardinal or any other honorific? All this, and the fact that the Victoria Police decided (or were told) to start investigating Pell seven years ago without any evidence at all, reinforces the contention that Pell is a scapegoat for the Roman Catholic Church and what is perceived by many influential people as its failure to do enough to prevent and atone for child abuse. In that sense it can be argued that he is a political prisoner, Australia’s Dreyfus. 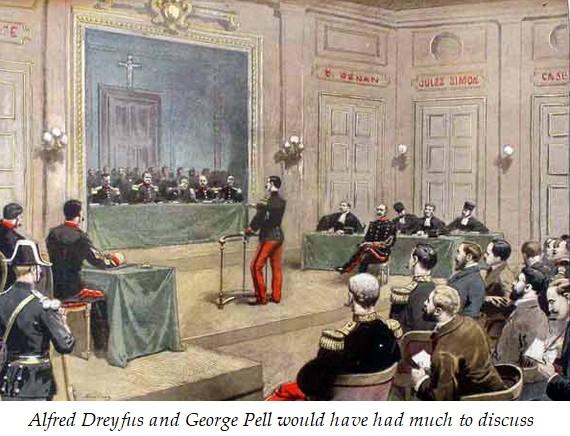 Apart from whatever judicial reasons there may be why the case cannot be heard before March 11, could it be that the ineluctable prospect that a decision must be made one way or another has not been exactly an incentive to get a move on? For this is, sad to say, a case where Their Honours are likely to be damned if they do and damned if they don’t. If they uphold Pell’s appeal the screams and protests from the “victim” industry, with its megaphone through the ABC and leftist media, will be audible as far away as the halls of the Vatican. There will be outraged editorials, tears on television (arch-Pell tormentor Louise Milligan will be beside herself) and, worse, the violence in the streets that the Left always orchestrates when it doesn’t get its own way, with demonstrations and perhaps riots, assaults on clergy, mob attempts to get at Pell himself. Heaven knows how Daniel Andrews would react. He thought it was “shameful” for Tony Abbott to visit Pell in gaol. Has Andrews, a professed Catholic, never read Matthew 25:36?

On the other hand, rejection of the appeal will compound the disrepute Pell’s treatment has brought on the Australian justice system in the eyes not only of many of the Anglosphere’s most eminent jurists but of fair-minded people everywhere.

For $1B a year you expect balance already!

How to Make It In Luvvie Grantland