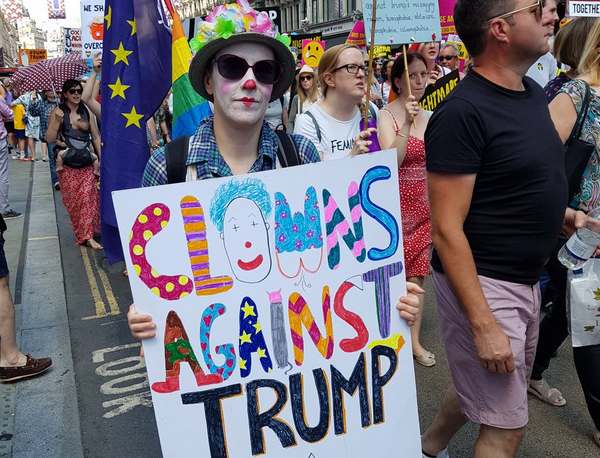 Greg Gutfeld is a conservative host on Fox News. He started off some years ago when Donald Trump was first elected as being something of a Trump sceptic. He has been won over. I think there are two ways to be won over, if you need be won over. First, consider Trump’s policies and his achievements.

To mention a few: lower business taxes; massive and continuing deregulation; 6.7 million new jobs created; unemployment rate down to 3.5 per cent; the lowest unemployment rate on record for African-Americans and Hispanic-Americans; real earnings up 2.5 per cent; poverty down; stock prices and home prices way up; energy sufficiency; the ISIS caliphate destroyed; the US embassy in Israel moved to Jerusalem; new trade deals negotiated with South Korea, Mexico, Canada and first-phase deals with Japan and China, with Europe and the UK to come; border security tightened; over 180 new (literalist) federal judges appointed and two supreme court justices; freeloading NATO countries heavied to pay more for their own defence; extracting the US from the flawed Iranian nuclear deal and imposing tough sanctions on Iran, opting out of the ineffective Paris (climate) Agreement designed to penalise Western industrial countries while giving those countries whose emissions are growing the fastest – China and India prominently – a free pass.

It would be possible to go on and on but my drift is clear. This is a presidency without precedent. He will go down as the most successful president ever, particularly if, as seems certain in view of the calibre of those jockeying to oppose him, he is given another four-year term. And all this, so far, while being continuously pelted with rotten eggs by the rampantly biased and dishonest media and being continually investigated for non-crimes, ending up with the current hollow impeachment trial.

The likes of him we have never seen before, unlike any previous president or political leader in the history of the world. And this provides a bridge into the second way to be won over by Trump.

He is a billionaire, the president and yet the common man. What you see is what you get. And how refreshing it is.

He gave a campaign rally in Milwaukee on January 14. Among his usual material he turned to household appliances, showers, toilets and light bulbs. He complained, as we might, about environmental rules which make life less convenient. Showers which produced too little water to wash his abundant hair properly; light bulbs which made one’s skin look orange. It was lovely, implicitly, self-deprecating stuff with the hard edge that he was relaxing pointless environmental rules which simply make life harder with no real end product. “Anybody have a new dishwasher? He asked. “I’m sorry for that,” he said, promising dishes will be beautifully clean in the future.

Greg Gutfeld played this part of Trumps’ speech on his show. “Are we good enough for him,” he queried. True, he was joking and playing to his enthusiastic Trump-supporting audience. But it is a good question.

Certainly, many people that I come into contact with would not be good enough for him if they lived in America. They whine about his character without knowing anything about him other than through the hateful filter of the ABC and other lefty media or, at best, through holier-than-thou conservative commentators who inevitably can’t praise Trump’s policies without virtue signaling their own disdain for some of his alleged peccadillos. Somehow or other I find them more distasteful than the lefties who openly despise everything about Trump and what he doing.

And where was Trump while the Democrats were engaging in their futile machinations to fit him up in the Senate trial? He wasn’t conferring desperately with his lawyers. He was at Davos reminding the assembled woke of past scares that proved to be empty, as will this one.

It’s hard to grasp the fawning which goes on when Greta Thunberg is on show. Grown men willingly berated by a sixteen-year-old schoolgirl. Hmm, think about that for a minute. Better not. She is now seventeen, by the way, so will soon exceed her use-by date. Expect a fourteen- or fifteen-year-old girl to pop up to carry the alarmists’ torch.

Some dopey reporter at Davos challenged Trump about Thunberg criticizing his policies. “How old is she,” he responded. Now use some imagination. Name any other world leader who would have the temerity to put into words what anyone of common sense thinks.

And back home, lickety-split, before you think can he can’t possibly add to the derangement of his political and media opponents he is becoming the first president to attend the March for Life in Washington DC. Cometh the need, and the need has never been greater, cometh the man.

As Went Victoria, So Goes the Nation

In Defence of Barnaby Joyce