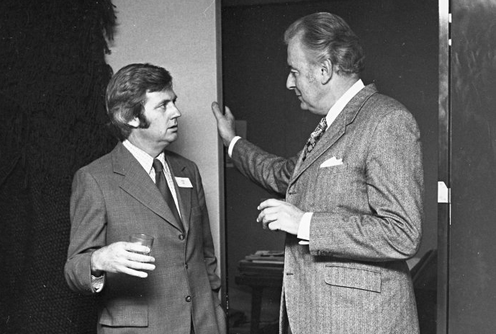 The Morrison Government has exploded into action on the public service, garnering headlines for its new, tough public service cuts. He has “swung the axe”, as the headline writers are saying — at first blush, red meat fodder for conservatives.  Big Government is bad, and cutting the numbers of “bloated felines” is always good news.

But caution is advised, assuredly.

There is always great excitement, too often not warranted, among Canberra watchers when machinery of government changes are afoot.  The Canberra bubble and its press gallery stenographers love this stuff.  They live for it.  Name changes!  Sackings of departmental secretaries!  New power structures! That great fictional source of wisdom, Sir Humphrey Appleby, has, as always, sage advice on the nature of the public service “problem”.

James Hacker : The trouble with Brussels is not internationalism, it’s too much bureaucracy.

Sir Humphrey Appleby : But the bureaucracy is a consequence of the internationalism. Why else would there be an English Commissioner with a French Director-General immediately below him, and an Italian Chef-du-Division reporting to the Frenchman and so on down the line.

Sir Humphrey: No, it’s even worse, it’s like the United Nations.

Bernard Woolley : Then perhaps, if I may interject, you are in fact in agreement.

Hacker , Sir Humphrey: No we’re not!

And so, to Australia, and the inexorable growth of government, and consequentially, of bureaucracy over these past fifty years. There are two core problems, and recognising them is critical to any discussion of the merits or otherwise of the latest government bravura.  The first is the growth of government.  The second is the politicisation of the once magnificent Australian Public Service.  Arguably, it is the second of these, not the first, which should be the cause for government scrutiny.  Alas, it seldom is.

The first move, very inconsequential (it seemed at the time), away from a career public service occurred when the Liberal prime minister of the day, John Gorton, removed the legendary Sir John Bunting from his post as head of the Prime Minister’s Department upon his ascension to The Lodge after the death of Harold Holt in late 1967.  Gorton replaced Bunting with a man more to his own reformist taste, Sir Lennox Hewitt.  The rot set in.  There was now a precedent for politicians picking bureaucrats to their personal or ideological liking.  Whitlam’s ascension cemented the trend.  His appointment of political advisers to senior bureaucratic roles set Australia on a course of bastardisation of the public service.  The key appointment was of John Menadue (pictured above with his patron) , a man of like desires and ambitions.  Another of Gough’s appointments was the endlessly overrated Peter Wilenski, a fellow traveller in the area of “public sector reform” but in practice another ideologue bent on social change and not policy making excellence.

These chancers lacked the gravitas of the titans that came before them – principally John Bunting, Fred Wheeler and Arthur Tange.  The so-called mandarins.  Alas, ageing white males.

But they sure knew how to run a country.  They were good at telling politicians that most of their ideas were barmy.  We have lost this.  To our great cost.  The idiocy of modern day politico-bureaucratic schemes hardly bears re-statement.  Think of climate change, energy policy, social policy, politically correct defence policies, and so on.

Where Whitlam went, other governments followed and went further.  They did so for reasons of power.  Each subsequent government, post-Whitlam, has further entrenched the politicised bureaucracy, and each government has got better at doing so.  Enshrining contracts based on “performance”, ensuring politically friendly mandarins, endlessly restructuring departments along the lines of the corporatist playbook, forever combining and recombining agencies, creating “super departments” serving multiple junior and senior ministers, and so on.

Modern Australian governments have created a bureaucratic shambles, while government has ever grown.  Even “good” governments like those of Howard and Abbott have massively extended ministerial staffs, filling them with wannabe Gen Xers and millennials who are clueless about Australian political history and best-practice machinery of government.  Observe the APS-produced video below, for example, and try not to wince at the references to diversity and other buzz words. All this has come about amid the strengthening of ministerial power and defenestration of the sources of good, sound, policy advice from a career public service willing to give fearless advice to bungling, image-obsessed politicians.

We can blame Gorton for starting it.  And Whitlam for thinking that he needed to politicise the service in order to ram through his multifaceted and unhinged Big Statist social revolution.  And then there was Big Government Malcolm (the first Mal), who merely toyed at the edges with public sector reform.  His “razor gang” was more modern Gillette than serious cutting, despite the great instincts of Phil Lynch and friends.  Then Bob Hawke created the “super departments”.  Why?  Who knows?  They didn’t achieve anything worthwhile.  They just reflected the modern “new public management” thinking that took hold in the 1980s and so impressed the politicians of the day on both sides of politics.

Modern Labor governments think the public service is conservative, and must be changed/controlled.  Modern Liberal governments think the public service is leftist, and must be controlled/changed.  They have both made a dog’s breakfast of it, and in seeking to remake the service in their own image have completely destroyed a previously outstanding system.  Yes there were always odd bureaucrats with political agendas, like Herbert Cole “Nugget” Coombs.  But mostly they were apolitical men (and yes, they were generally men) of substance and character, who knew how to shape policy for the pollies they served.

We have had permanent revolution ever since Gorton then Whitlam revolutionised the Australian policy making process. Modern public service departments are the marketing arms of venal, careerist politicians on the make, populated by public relations graduates.

Oh, and woke to boot, ruled as they are by human resources officers who have all studied sociology and women’s studies at our once great tertiary institutions.  One can only imagine what Sir Arthur Tange would have made of the “policy” of buying massively expensive French nuclear submarines and converting them to deisel-electric, an absurdity no other navy has ever considered, let alone implemented, in order to save the seat of a gnome like Christopher Pyne.  Or of the transgendered armed forces “defending” our shores.  We don’t need to ask what John Stone would make of the Martin Parkinson climate change obsessed approach to Treasury matters.  We can guess.

If only, therefore, it were that simple for ScoMo to waddle in, make some noise and break a few eggs to create the new and necessarily flawed omelette.  His efforts will, inevitably, be all about more control by politicians — politicians who for at least a generation (or two) have not had the remotest conception of how government should work.  Of what its purpose is.  And how to do policy.

Any public service changes like those announced this week are all about current political needs and political messaging/management, not meaningful changes to the machinery of government that will actually benefit Australians.

Until someone recognises exactly what has happened to the once great public service and why this matters, we will only keep building upon the problems created by the big mistakes of the 60s and 70s, whatever the numbers of public servants might be and however they are departmentally shuffled and re-shuffled.

Now, I am no fan of bloated bureaucracy.  Nor of the deeply troubling state.  But let us, like Sir Humphrey, look to the source of the problem.  It is our politicians that let us down.  They have since 1968 when it comes to public sector management.

The phrase “shake-up” is a dead giveaway.  Cutting government is a feint to distract attention from the real intent of political management.  Don’t be fooled.

The mother of all shameless spinners

The Guardian of the Inane