Enough to Give Belief a Bad Name 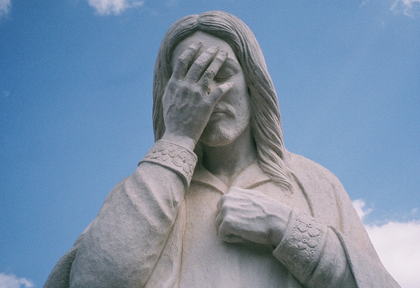 I left a left-wing coffee coterie to which I belonged a few years back. I could not bring myself to be civil in their midst. I made and emailed brusque comments. Let’s face it they deserved every one such comment, and more, for they were leftists bent on the destruction of our Judeo-Christian civilisation.

My New Year’s resolution is to remain, if not uncivil, at least cutting with a soupçon of ridicule thrown in; except, that is, when enjoined with any members of my church congregation. Church is no place for ungentlemanly behaviour however much one is tried. And one is.

I have had to put up this year with a lady praying that God would intervene to change the minds of climate deniers; with regular prayers extolling us to take better care of the environment and in support of refugees and asylum seekers. Now, I believe in taking care of the environment and being compassionate towards those in trouble in the world, but I can’t help but feel that I am being preached at in an ABC kind of way. Incidentally, our rector stands above the fray and sermonises on scriptural matters. He is an anchor of belief, sanity and reason.

One parishioner of English origin that I spoke with the other evening does not sympathise with Folau, favoured Remain in the Brexit argument and dislikes Donald Trump. I thought it was wise to stop there. I have no doubt that except for me, and perhaps one to two others, everyone else is a convinced believer in man-made climate change. I doubt anyone but me harbours any doubts at all about the truth of the so-called “stolen generations.” Why would you if you get your information and news from the ABC and “mainstream” newspapers like the SMH and The Age.

We are caught in a pincer, I think. On the one hand we have militant atheists, the godless Left, who because they have no scriptural guidelines are free to make up stuff. And, as I will come to, we have Christian wets who are ready to compromise scripture to be nice or to serve their political beliefs.

For atheists, there are no externally-set standards. Standards can be adjusted at will to cater for every “woke” cause. From there, live and let live goes beyond a civilised tolerance of differences from norms to an aggressive insistence that there are no norms and, onwards from there, to “cancelling” those who say that there are.

You are now at risk if you say that men can’t have babies. And evidently, to boot, you would be wrong. It was widely reported, via Medicare, that twenty-two men gave birth in 2018/19; fewer miracles than in the previous two years. In a twist of history, such miracles are now clearly embraced by atheists.

It is true that there are many conservatives who are atheists. So, atheism itself does not necessarily lead to a reckless disregard for societal norms built over centuries. Nevertheless, those fighting the conservative cause are hamstrung if they have no religious faith – by which, to be clear, I mean Christian or Jewish faith. For example, same sex marriage should be opposed because it was brought in, in the blink of an eye, against the strictures of millenniums of tradition and convention. But it is also clearly against God’s law, as set out in the Bible. That is a powerful adjunct to the secular argument.

This brings me to Christians who identify themselves with leftist politics. The two simply don’t mix. They don’t mix because Christians should not be willingly complicit in producing misery. And there is ample evidence showing that leftist policy prescriptions do just that.

Take a recent piece (19 December) by editor-in-chief Mark Galli of Christianity Today; a prominent evangelical magazine founded by Billy Graham. Billy will be turning in his grave. Or he would be if he were not Heaven bound at the end of days. Galli calls for Trump’s removal from office and is apparently unconcerned about the plight of the disadvantaged if the radical Democrats were to win power. His job is safe. Here he is:

[T]he facts in this instance are unambiguous: The president of the United States attempted to use his political power to coerce a foreign leader to harass and discredit one of the president’s political opponents. That is not only a violation of the Constitution; more importantly, it is profoundly immoral … That he should be removed, we believe, is not a matter of partisan loyalties but loyalty to the Creator of the Ten Commandments…To the many evangelicals who continue to support Mr. Trump in spite of his blackened moral record, we might say this: Remember who you are and whom you serve. Consider how your justification of Mr. Trump influences your witness to your Lord and Savior. Consider what an unbelieving world will say if you continue to brush off Mr. Trump’s immoral words and behavior in the cause of political expediency.

Leave aside the unctuous moral preening and the invocation of God. The facts are not unambiguous. I have followed the case closely and there is no evidence that Trump attempted to coerce a foreign leader in the cause of discrediting a political opponent. That same foreign leader has denied that there was ever coercion as has Trump. You can’t go around as a Christian leader making things up. It is immoral.

Mind you, Trump has a lot to answer for.

He has helped the unemployed find jobs and reduced poverty. Black and Hispanic unemployment is at the lowest level ever recorded. He is supporting school choice for black children living in inner cities. He is establishing “Opportunity Zones” to attract investments into low-income areas. He has appointed judges less likely to take a cavalier approach to killing the unborn.

He has moved the US embassy to Jerusalem and recognised Israel’s sovereignty over the Golan Heights. He has rebuilt the US military to keep us all safer. He has defeated ISIS in Syria. He has persuaded NATO countries to spend more on their own defence. He has renegotiated trade deals to help American workers and farmers. He is trying manfully to better secure America’s borders. And there is so much more that he has done or is doing.

Trump is an all-American heroic president. He was absolutely necessary to hold back the destructive leftist tide which could yet still drown us all. Did God have a hand in his elevation? I reckon He might. God doesn’t necessarily pick the most righteous. Trumps transgressions, such as they are, are not nearly in the same ballpark as were King David’s. But apparently Trump must go. Why? Galli thinks he is immoral.

We are all immoral. “You hypocrite, first take the log out of your own eye.” In this case, no matter how moral or immoral Trump happens to be in the various facets of his life, he is doing great good for a great many. That is a morality to which Christians and conservatives should subscribe.