The Democrats Make Insanity a Vocation 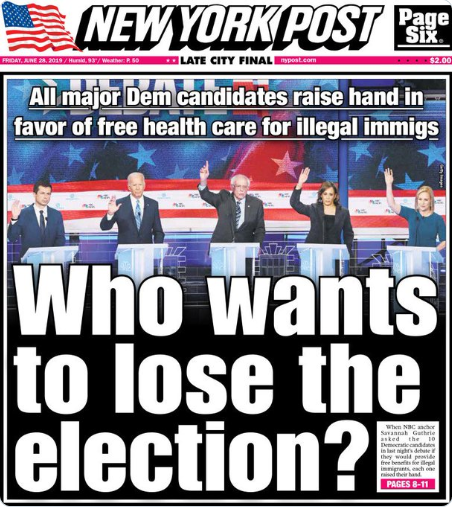 Times ain’t normal. You might think that it has all happened before but it hasn’t. The Democratic Party in the United States has lost its collective mind. Maybe you could go back to the fall of the Roman Empire to find a parallel. Short of that, we are in unknown territory. The world would change, and definitely not for the better, if the current version of the Democratic Party were to get into power.

Tune in to any of the Dem debates and discover that all of the presidential candidates occupy cloud-cuckoo land. They want open borders, convicted murderers to vote from their jail cells, all illegal immigrants to be given amnesty and health care, all student debt forgiven, free college tuition, increases in minimum wages, increased taxes on the wealthy and on corporations, increases in the minimum wage, reparations for the sins of slavery and Jim Crow (to whom, by whom, who the heck knows?) And all of this, and much more, while dismantling the fossil-fuel industries that power America.

You might think that the above doesn’t apply to the so-called moderates among the presidential candidates. There are no moderates. The Left has captured the Party.

Why would you think that all but two of the 31 newly elected supposedly moderate Democratic Congressmen and women, who won in districts in 2018 that voted for Trump, voted for impeachment. Weren’t they brave in standing up for their principles? What a joke. They knew that they would be disowned and deselected by their Party in 2020 if they didn’t toe the line.

Take moderate Joe Biden answering this question at the most recent debate in Los Angeles on December 19. He was asked if he would be willing to put at risk the jobs of hundreds of thousands of blue-collar workers in the interest of transitioning to a greener economy”

No, it isn’t real; it is imaginary. One would have liked one of his competitors to have piped up and said so. But, of course, they are all singing from the Green New Deal playbook; otherwise known as “How to Cripple America.” When you think about Russian collusion, I think we can say with confidence that this playbook (the wet dream of US commie academics) most definitely comes with Putin’s imprimatur.

Here is another moderate, Mayor Pete Buttigieg of no known distinction save that he is gay. He was asked if he would compensate families entering the US illegally who were separated at the border. “Yes,” he said, “and they should have a fast track to citizenship, because what the United States did under this president to them was wrong. We have a moral obligation to make right what was broken.”

Of course, he would say that. They all would. No one could risk disagreeing. At an earlier debate, with many more candidates on stage, they were collectively asked whether they would give free health insurance to illegal immigrants. Only Biden’s hand stayed down; momentarily, until he saw the lie of the land and then dutifully raised his hand in obeisance to the mob.

Name any woke cause and the heads nod. All too afraid to buck AOC, the Squad and the rest of the left-wing rabble that now controls Pelosi and the Party. Mind you, Pocahontas takes the cake in the woke stakes.

An outlier among outliers, here are two of her undertakings in the unfortunate event she becomes president: “I will go to the Rose Garden once every year to read the names of transgender women, of people of color, who have been killed in the past year … I would change the rules now that put people in prison based on their birth-sex identification rather than their current identification.” Apparently, she doesn’t give a hoot about straight white murder victims or about actual women trapped in cells with male-equipped six-footers who have put it about that they like to think of themselves as females. Bizarre on stilts.

Many people here thought, as did I, that electing Shorten would be disastrous. However, that pales in import. Shorten had bad policies but he was not around the bend. I suppose Boris Johnson’s election victory was a defining historical event, but even Corbyn did not seem as mad as the Dems. And the fate of Britain is not nearly as important as the fate of America.

What is particularly disquieting is the way the extremism which has taken over the Democratic Party has become the new normal. Presidential candidates can espouse the most ridiculous, untenable dangerous and debilitating policies without being laughed off the stage. Sure, you get some conservative commentators, including a few on Fox News, who rightly ridicule the idiocy on show. But, on the whole, the MSM take it in their stride. Gorillas in a beauty pageant. Nothing to see here.

When even lefty Barack Obama worries where the Dems are heading — “The average American doesn’t think we have to completely tear down the system and remake it.” — we’ve all got to worry. Perhaps another Trump win in 2020 (and, surely, he will win) will bring some reason and sense back to the Democratic Party. Maybe.

Neanderthals to Humans to Post-Humans