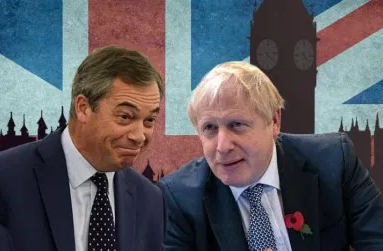 As I write this from San Diego, one of the biggest elections of my life is less than a week away.  On December 12 Britain goes to the polls. At stake is Brexit and any sort of actual departure from the European Union — ever-growing global governance versus the reinvigoration of the nation state.  Yes, that’s true, but what’s really at stake is whether the British political class will honour the 2016 referendum result or prevaricate and stall its way to over-ruling the wishes of the majority in favour of those of the Establishment.

That latter insider class has resorted to the worst sort of lawfare, from condoning MPs elected on a clear ‘deliver Brexit’ manifesto abandoning their constituency voters and promises in favour of their personal pro-European druthers, to spewing all sorts of exaggerated apocalyptic predictions about economic annihilation if (get this!) the world’s fifth-largest economy has to function on its own, more or less the way Australia and New Zealand do. Never mentioned is that the EU has been the world’s slowest growing region for a decade and a half.

And then there’s the raw, unadulterated hatred the Remainers have shown towards Boris Johnson.  They hate him firstly because they recognise, correctly, that without Boris (and Nigel Farage) the 2016 Brexit referendum would have gone the other way.  And because they seem incapable of attributing sincere motives to anyone on the other side of this debate – though they’re perfectly happy to view all their own Remainer preferences as though they were motivated purely by altruism — a joke and one apparent to all when it comes from the mouths of, say, university types receiving huge dollops of cash from the EU.  And because, perhaps worst of all in Remainer eyes, they see Boris as a class traitor.  He looks to be a natural-born Remainer, yet he co-led the Leave case. So they assume he must be a chancer, an insincere opportunist.  After all, ‘no one like us could be for leaving’.  So for them it must be that those on the other side are motivated by bad faith all the way up and down.

To be perfectly blunt, Boris was lucky to get an election at all. With the top judges displaying their unvarnished pro-EU proclivities and prepared to break  centuries of history related to parliamentary conventions surrounding prorogation, the Boris Tories were completely locked in to a dysfunctional parliament unable to force an election and which had seen control of its agenda ripped away from the government by Speaker John Bercow (again in breach of eons of convention).  The Liberal Democrats and Labour could have kept this zombie parliament going for another year and a half.  But the Lib Dems looked at a few favourable polls and, together with the separatist Scots Nationalists, opted to pull the plug.  Labour then had no choice but to follow. And so we have next week’s election.

Now Jeremy Corbyn is the most left-wing leader of the British Labour Party ever, and that is saying a lot, believe you me.  He seems more at home with hard left revolutionaries than anyone else, and he has overseen a massive rise in anti-Semitism within his Labour Party.  And still the latest polls put him only about eight points behind Boris and the Tories.  That might seem to be a lot, but it’s not.  Why not?  Because there is sizeable gerrymander in place with the electoral boundaries, which significantly favour Labour.  The Tories need to win by five or six points (assuming an even distribution) just to tie.  David Cameron, after his majority win, had a chance to implement fairer constituency boundaries.  To his shame he didn’t do it — partly, no doubt, due to the Brexit referendum and his shock at the result.

Last point to make.  Boris has been playing extreme hard ball with Nigel Farage and the Brexit Party, which was one of his two options.  The other was to cut a soft deal with them and withdraw Tory candidates from about 40 long-time Labour seats in which the Tories have no real chance – as the voters there simply won’t vote for Conservatives.  Boris rejected that option, the one I think was wiser.  Instead he’s gone for the ‘dare Farage to ruin Brexit’ strategy.  In effect he’s forcing Farage to open the field to the Tories if he wants Brexit.  That has worked, sort of.  Farage has withdrawn candidates from all the Tory-held seats and is running them only in a limited number of others.  But he would have withdrawn candidates from all but 40 if only Boris had joined forces.  If Boris pulls this off, he’ll be a hero and he won’t (this is key to his thinking) have a party with 20 or 30 MPs on his right in Parliament pointing out any concessions he might make in the coming Brexit negotiations.

If Boris doesn’t pull it off, he’ll be second-guessed till the Second Coming.

My bet?  Boris will win a majority (the only other plausible possibility being a hung Parliament).  But it needs to be a fair sized one of at least 20 or 25 in order to safeguard against lying Tory MPs who will sup with Remainers once elected. (Note, though, that most of these have been cleaned out of the party by Boris – most, but not all.)

Anyway, fingers crossed all you outsider types (like me) who see this as the start of the fightback by the nation state against the anti-democratic supranational globalists who use their positions in the bureaucracy, media and judiciary – not to mention international law itself – to gainsay the preferences of the majority.  Thursday in Britain is a big day for us all.