Sport, Politics and the English Language 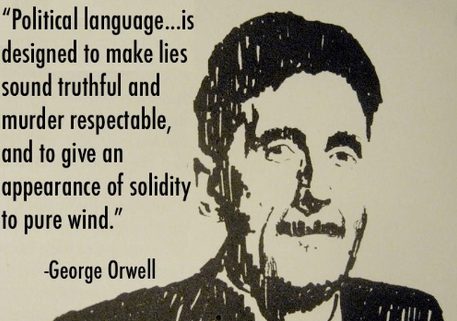 I watch English football on TV on a regular basis. Many moons ago a friend of mine used to switch off the commentary because it annoyed him so much. I found it annoying to watch a match at his house because of this. Now I can understand his point of view. The commentators are annoying.

For example, they come replete with a myriad of obscure facts to fill in the time. Like saying it was 1928 since Liverpool FC last kept a clean sheet against Sheffield United at Bramall Lane; or some such trivia. In the distant past commentators focused on who passed the ball to whom and other in-game activities.

Nowadays commentators think their job is to embellish the occasion with ephemeral statistical perspectives. Mindless words blowing in the wind. Windbaggery. Does this happen in other codes? I don’t know.

Unfortunately, it doesn’t end there. I can’t speak generally of sports commentators, except for cricket where the standard of English expression is relatively good, if less erudite than it used to be, but those commenting on English football provide no good guidance for the young to follow. I have previously commented on the abandonment of the adverb, he ran quick etc., which is now all but complete. The other day I heard a commentator say of Leicester City, when they were five-to-nil ahead, that “they are so shot-shy it is scary.” Has he any idea what shot-shy means? Obviously not.

Here is a well-known expression, they obviously think, let’s just throw it in willy-nilly. Player so and so “overran the ball” we were told at a game I watched a little time ago when, in fact, the player had kicked the ball too far ahead of himself and duly lost it to an opposing player. A team which had gained possession of the ball through an ill-judged pass from the opposition had turned over the ball we were told. No, the opposition had turned over the ball. “Forcing a turnover” would be correct to say in some circumstances, but he didn’t say that because those were not the circumstances.

Black doesn’t become white on a sporting whim. Before segueing into the use of words in general, why has “hit” replaced “stroke” or “drive” in cricket and “shot” in football? Again, I am not sure whether other sports have been affected in similar ways.

Now, when Steve Smith makes a superb cover drive (which he doesn’t often do by the way, preferring the leg side) it is described as a good hit. Is “cover hit” is on its way? How many good cover hits did The Don make, I wonder? When Mo Salah scores a goal for Liverpool from outside the penalty area (which he also doesn’t often do) it is similarly described as a good hit. I assume it comes from American baseball? Though I am unsure about that. I find it irritating, even though there is not an anti-American bone in my body.

Boris Johnson has been accused of inciting violence by describing the legislation forcing him to write to the EU asking for an article 50 extension as the “surrender bill.” He countered by describing the objection to his use of the word surrender as “humbug.” And surely it is. Though, could humbug soon be considered out of bounds? Hold on, Boris has reportedly already expressed regret at using the word humbug. Has humbug thus joined the naughty-word list?

Surely, we already have an increasing number of words and expressions we can’t use, without bringing in common or garden words and expressions. Maybe Boris should have said “fealty bill.” That might have disconcerted most British Labour Party MPs who, judging from what I have seen, don’t seem to have been the brightest kids on the block. He might not then have been seduced into the transgression of invoking humbug.

“Mankind” is no longer a permitted word. Justin ‘black-face’ Trudeau has already suggested “people-kind” as the post-modern respectable alternative. “Ladies and gentleman” is at risk because it apparently offends our transgender cousins. And I suspect it has intersectionality issues. After all, I wouldn’t be surprised if the expression ‘ladies and gentlemen’ is not a hark back to a white supremacist, racist, colonial past.

You can’t say “coloured people” but must say “people of colour” At the same time, strangely enough, ‘black people’ and ‘white people’ remain de rigueur. People of ‘whiteness’ or of ‘blackness’ we do not say. Presumably because it sounds ugly. Give it time.

The “n word”, as they refer to it in the US, is most definitely out of bounds, as is the once respectable “negro.” How is it then that in Quentin Tarantino’s movies the n-word is common currency? Probably Quentin is truer to the gritter aspects of real life than is real life as portrayed on the public airwaves.

Great consternation was brought to our household when as a young boy I inquired after the meaning of the f-word. Though I recall Michael Parkinson freeing his guests to express themselves in this way if they wished. And Robert De Niro is particularly attached to it when describing Donald Trump. The c-word is off limits for everyone and rightly so. Mind you, I am not sure why I feel this way. It’s a cultural thing I suppose. Even the f-word was out of bounds when I was growing up.

4 thoughts on “Sport, Politics and the English Language”