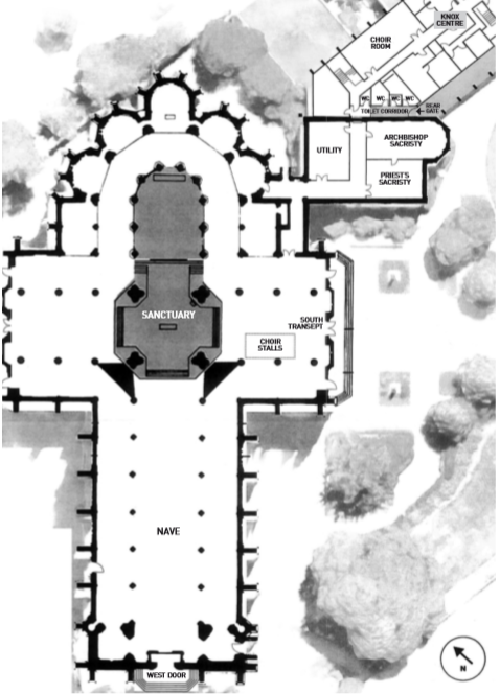 Following the rejection in August by the Victorian Appeal Court of Cardinal George Pell’s appeal against his conviction for historic sex abuse of two under-age choirboys after a Sunday Solemn Mass at St Patrick’s Cathedral, Melbourne, in December 1996, his legal advisers have now sought leave to appeal to the High Court. There are two proposed grounds for that appeal.

The first is that the majority judgment of Chief Justice Anne Ferguson and Appeal Court President Chris Maxwell erred by having so much faith in the credibility of the accuser that they reversed the accepted onus of proof required in a criminal trial. Instead of the onus being on the prosecution to prove the defendant guilty beyond reasonable doubt, the majority judgment actually put the onus on the defence to prove the prosecution case was impossible. The application for special leave to appeal says:

Though the majority [Ferguson and Maxwell] said that there was no onus on the applicant [Pell] to prove impossibility, that is precisely what their analysis required him to do … In effect, this approach required the applicant to establish actual innocence, as opposed to merely pointing to doubt, in order to counter the favourable impression of the complainant’s sincerity adopted by the majority. This was a reversal of the onus and standard of proof.

The second ground of appeal is that the judgment of Ferguson and Maxwell itself, when read closely, established there was a reasonable doubt that there was any opportunity for Pell to have committed the offence. This ground focuses on Ferguson and Maxwell’s claim that there was a five- to six-minute hiatus in the proceedings immediately after the Mass when the offence purportedly took place. The application to the High Court says:

The facts as found by them [Ferguson and Maxwell] were that the only time when the room [the priests’ sacristy] was empty for 5–6 minutes was a time when the complainant [the former choirboy] and the other boy were not in the room. Thus according to this aspect of the majority’s own approach, the verdicts were unreasonable.

In what follows here, I will focus only on the second ground of appeal, especially what the available evidence and argument from the original appeal says about the five- to six-minute interlude, or what the prosecution who originated the notion called “this hiatus, this gap”.

Ferguson and Maxwell begin discussion of this issue by addressing the defence’s claim that it was not possible for two choirboys to be assaulted by Pell in the priests’ sacristy after Mass undetected. They observe that the choirboy accuser said the door to the priests’ sacristy was unlocked and the room unoccupied when he and his choirboy friend entered. The possibility or impossibility of this having occurred, the majority judges said, depended on a number of issues about both ritual and procedure, which were explored by several witnesses, specifically:

# when the door to the priests’ sacristy was unlocked;

# when the altar servers returned to the priests’ sacristy to complete their # participation in the Mass by bowing to the crucifix;

# when the clearing away of sacred vessels and other items from the sanctuary commenced, and how long it took; and

# whether the priests’ sacristy was unlocked and unattended at any time in the post-Mass period. [par 292 of majority judgment]

Ferguson and Maxwell said it was common ground between both prosecution and defence that the cathedral’s sacristan, Maxwell Potter, was the person who unlocked the priests’ sacristy after Mass. Potter’s evidence was that, after the procession of choir and clergy had gone through the west door of the cathedral, he would go to the sanctuary, where he would wait until parishioners had finished what he called their “private time” for prayer after the service. Ferguson and Maxwell said this was typically a period of five or six minutes. Potter would then unlock the door to the priests’ sacristy. He would return to the sanctuary to collect the sacred vessels used in the Mass and—with the assistance of the altar servers—would take them back to the priests’ sacristy. [par 293]

However, the judges note that the prosecution had pointed out that Potter’s evidence about waiting to unlock the sacristy only at the end of that “private time” was in conflict with evidence given by cathedral altar servers Jeffrey Connor and Daniel McGlone (who were both adults in 1996).

McGlone’s evidence was that, at the conclusion of Mass, the altar servers would lead the procession back to the rear gate. They would then enter the priests’ sacristy, which was already “unlocked and open”, bow to the crucifix, exit the sacristy and commence their duties as altar servers. McGlone said he had not seen the priests’ sacristy locked at this time. [par 294] McGlone said:

A: You’d go in there and my recollection is the doors, internal doors were open.

Q: To the Priests’ Sacristy?

A: The Priests’ Sacristy. The only one that was ever sort of locked was the Archbishop’s Sacristy.

Connor’s evidence was similar. Having led the procession to the point where the choir could return to the choir room, he said, the altar servers would go directly to the priests’ sacristy and bow to the crucifix. If Potter was himself acting as an altar server, he would unlock the sacristy door as they were coming through. If not, the servers would arrive and the door would be unlocked and open. Connor said Potter would usually be there waiting for them but he could not say that he was there every time. [par 295]

Ferguson and Maxwell say the effect of the altar servers’ evidence was that the unlocking of the sacristy door, and their bowing to the crucifix, occurred soon after the procession finished and that, by the time they returned to the sanctuary to assist Potter, the door was already unlocked. The judges continue:

On that view, it was quite possible for the Sacristy to have been unlocked and unattended at around the time A [the accuser] said he and B [his friend] broke away from the procession. The clearing of the sanctuary had, of course, to await the end of the private prayer for parishioners. The Crown case as presented to the jury was that “there is this hiatus, this gap” during which the first incident had occurred. [par 296]

Ferguson and Maxwell also quote passages of evidence from Peter Finnigan, choir marshal in 1996, and Geoffrey Cox, choirmaster and organist in 1996, about how busy the sacristy became once the altar servers arrived. Finnigan said:

who were very busy removing materials from the sanctuary, taking them back out to the Sacristy. In fact, the whole area of the sanctuary into the sacristies was a hive of activity and there were people doing jobs. [par 299]

On the basis of the above evidence, Ferguson and Maxwell drew the following conclusion:

In our view, taking the evidence as a whole, it was open to the jury to find that the assaults took place in the 5–6 minutes of private prayer time and that this was before the “hive of activity” described by the other witnesses began. The jury were not bound to have a reasonable doubt. [par 300]

However, Ferguson and Maxwell make their reasoning difficult to follow because, while they relate the five to six minutes of “private prayer” time to Potter’s activities—it began immediately after Potter had seen “the procession of choir and clergy had gone through the west door of the cathedral”—they don’t say what the other players in this scenario, especially the altar servers, were doing at the same time. For the Ferguson–Maxwell version of events to be true, these crucial participants in the mass that fateful Sunday must have played a role that allowed Pell’s abuse of the boys to have occurred within that five- to six-minute hiatus, when no one else was in the priests’ sacristy.

I have drawn up a timeline of all the events that the evidence endorsed by Ferguson and Maxwell permits (see pages 30 and 31). All the principal characters they discuss on this specific topic are listed in it and the activities they undertook in each minute of a fifteen-minute period after the end of the mass are recorded.

The timeline has its starting point at 12:02 p.m. on the Sunday concerned. According to Finnigan [par 805], Mass usually finished a minute or two after 12 noon. The minute-by-minute list of events comes directly from evidence endorsed by Ferguson and Maxwell, and in any case is not affected by the exact starting time but rather the time elapsed after Mass finished, whenever that was.

The six minutes taken by the exit procession to move down the centre aisle of the nave of the cathedral, to go through the west door, and to take an external path back to the rear gate of the cathedral, and go from there to the priests’ sacristy, has been recently paced out and timed at the cathedral itself by a source I trust.

The six minutes required for the exit procession is also the same that cathedral officials today say it takes the entrance procession for a Solemn Mass to move from the priests’ sacristy, to the cathedral’s rear gate, and then via external procession to the west door, and then up the centre aisle to the positions allocated to participants inside the cathedral to celebrate the Mass.

The timeline published here shows that the hypothesis of the Appeal Court majority, that there was a hiatus period during which Potter waited for private prayers to end in the cathedral, during which time the priests’ sacristy was occupied solely by Pell and the two choirboys, is wrong.

The Ferguson–Maxwell scenario made two mistakes. It neglected to factor into its own assumptions the six minutes needed for the procession, including the altar servers, to move from inside the cathedral to its outside rear gate, and then into the priests’ sacristy; and it put aside what the altar servers told them they did once the procession was over.

The timeline shows that the altar servers, especially those who headed the procession, would have got to the priests’ sacristy before the two boys. They took a more direct route to that room than the choirboy, who said he and his friend backtracked externally from the toilet corridor to the south transept door before re-entering the cathedral and following the internal route to the priests’ sacristy, a route Ferguson and Maxwell accepted as true [par 203]. My informant about the cathedral says that, starting from the rear gate, it would take the altar servers sixteen seconds (twenty-two paces) to go along the toilet corridor to the priests’ sacristy. However, using the choirboys’ alternative route via the south transept doors, it would have taken them one minute sixteen seconds (115 paces) to go from the rear gate to the sacristy. The altar servers went there directly and, finding the door unlocked, as the two judges assure us it was, would have gone in exactly one minute before the boys arrived.

So there was no time available in that room after the Mass for the six minutes of sexual abuse to take place. As the defence rightly argued, the scenario described by Pell’s accuser is not only the subject of reasonable doubt, it is extremely improbable it ever happened.

Keith Windschuttle is Editor of Quadrant. 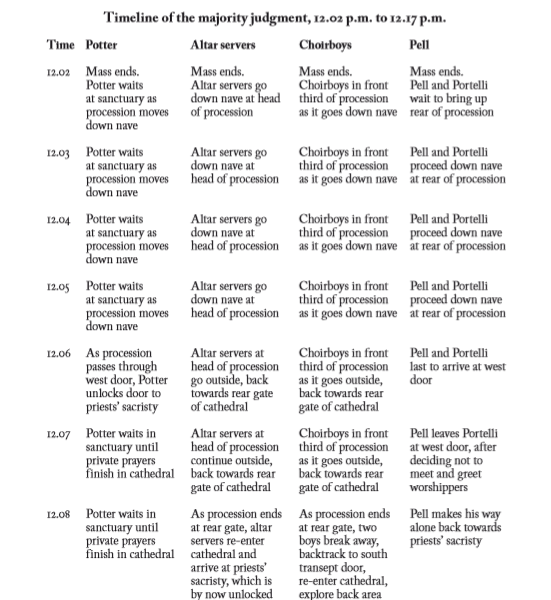 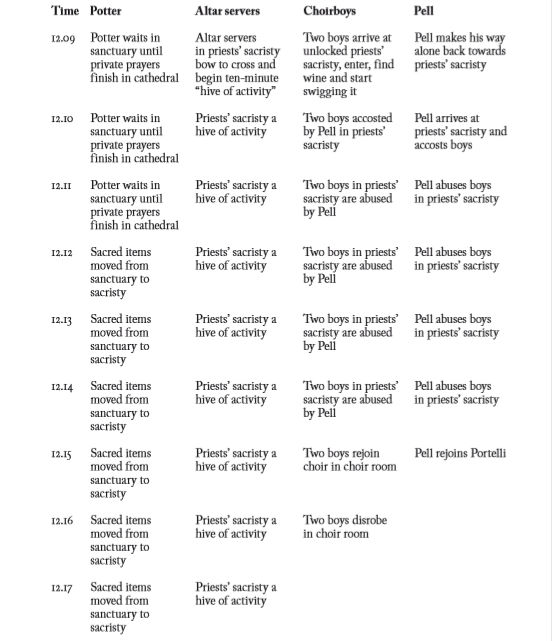 Not Angry? You Should Be