The Four Sisters of Anti-Semitism 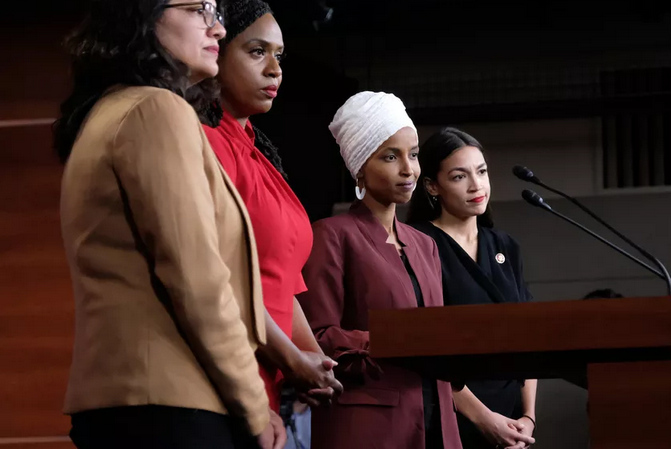 Imagine The Squad (pictured above) answering this question: What is your goal? Why the destruction of Israel and the death of your civilisation? The four congresswomen’s reply in unison. ‘Surely, you’re not so dim as to think we’ll ever stop’. Here is Rashida Tlaib on Twitter on August 16.

When I won, it gave the Palestinian people hope that someone will finally speak the truth about the inhumane conditions. I can’t allow the State of Israel to take away that light by humiliating me & use my love for my sity [grandmother] to bow down to their oppressive and racist policies

Says it all really. Apparently, Congresswoman Tlaib didn’t win to faithfully represent the interests of those who elected her within her district of Michigan but to represent Palestinian causes, of which destroying Israel sits supreme.

Tlaib and Ilhan Omar were refused entry to Israel. This is because they actively support the iniquitous BDS campaign and provide aid and comfort to Palestinian terrorist organisations. A reasonable posture on Israel’s part, one would think, if one were rational. Unfortunately, rationality, along with its bedfellow common sense, is in meagre supply these days. So various idiots, including some Republicans, expressed disagreement with Israel keeping enemies of the state, intent on using their visit to assist in their wicked cause of destroying the state, out of the state. Just what was Netanyahu thinking?

Here is a clue. Imagine Britain allowing William Joyce (Lord Haw-Haw) to make a visit in 1943 to assist him in his propaganda efforts when back in Germany. No, that didn’t happen, instead the British captured him in 1945 and hanged him in 1946. Hmm. A terrible idea has entered my head which, out of Christian charity, I’ve dismissed out of hand.

Having been refused entry to make mischief, as part of a malignant anti-Israel double act, Tlaib asked whether she could visit her grandmother on humanitarian grounds. “This could be my last opportunity to see her. I will respect any restrictions and will not promote boycotts against Israel during my visit,” she wrote (August 15) to the Israeli Ministry of the Interior.

Without delay, her visit was approved. That didn’t at all suit her demonization agenda – oh, she no doubt inwardly pined, if only those racist Israelis had refused me a visit to me poor old granny, what hay I could have made — hence her tweet which I quoted at the start to which she added this below:

Silencing me & treating me like a criminal is not what she wants for me. It would kill a piece of me. I have decided that visiting my grandmother under these oppressive conditions stands against everything I believe in–fighting against racism, oppression & injustice.

Leap from the despicable to the awesome Trump; easily the most marvelous thing that has happened to the Western body politic since Churchill replaced Chamberlain. At his latest rally in Manchester, New Hampshire, President Trump again made the point that he is president of the US, not of the world. Refreshing it is to have a Western leader who understands his mandate. Hungary’s Prime Minister Viktor Orban is another, but they are few on the ground.

Most mainstream Western political leaders, whether of the right or the left, including ours, are garden-variety globalists. They are out to dispense increasing quantities of useless foreign aid to ne’er-do-well states; import unending streams of poorly-skilled, culturally-challenged refugees; free up trade whatever the despair this causes within many of their own communities; and make quixotic quests to save the planet whatever the cost to their own industries, to their old and to their poor. However, as bad as they are, they still pay lip service to the primacy of their own country while acting on behalf of the world. Much, much worse lurks stage far-left.

Tlaib and Omar and their fellow Squad members, Ayanna Pressley and Alexandria Ocasio-Cortez (and keep tabs on the sinister Democrat activist Linda Sarsour), are part of a growing breed of progressive leftist politicians in America, in the UK and in Europe. They despise Western civilisation and are out to pull it down. They represent a whole new (stinking) kettle of fish.

Opening national borders, demonising and destroying Israel, undermining Christianity and traditional family values, and driving out the use of cheap and reliable energy form part of their agenda. And, if there were any doubt of their malign intent, they overwhelmingly ally themselves with a theological ideology which results in relative poverty and hateful discrimination whenever and wherever it presides.

Thankfully, as yet, they are not as prevalent here. For example, the ALP does not harbour anything like the anti-Semitism and pro-Islamism that is rife in the British Labour Party. But The Greens bear close watching. And, you don’t have to scratch too hard I think to find Squad fellow-travellers in academia.

That’s No Laddie. That’s My Wife

Watch Out, Tassie, Here We Come!

Saint Malcolm, From Bad to Verse