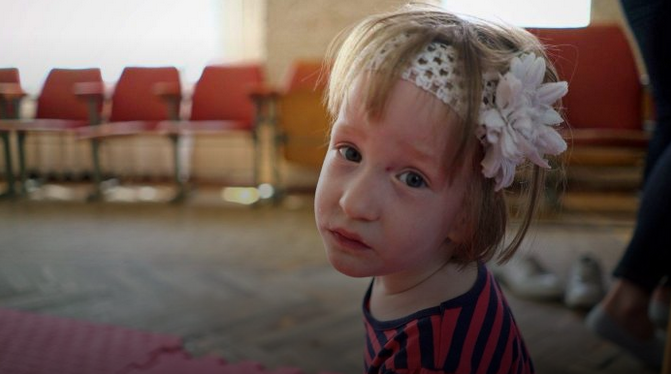 Radio National’s AM presenter, Sabra Lane, recently was brought to tears by ABC colleague Samantha Hawley’s report of a surrogate child abandoned in Ukraine. Three-year-old Bridget (pictured above, via the ABC) whose twin brother died at birth, is afflicted with congenital abnormalities that suggest her life will be marked by developmental delays and low-level deficits. These were too much for the California-based couple who contracted the pregnancy, then abandoned the surrogacy and left the “parentless” Bridget to languish in an orphanage that likely represents the only sort of home she is ever likely to know.

I’m not about to presuppose the particular circumstances or ‘triggers’ that reduced Ms Lane to an inconsolable state, but I’d hazard a guess that human compassion and its bedfellow, empathy, played a role in prompting her tears. In the wake of such a distressing story it would be easy to get lost in a debate about the disturbing surrogacy industry, now experiencing a boom driven in part by the purported ‘human right’ of the LGBTQI+ community to overcome the limits of biology and produce children.

What really interests me, however, is a deeper question that references the current Abortion Bill before the NSW parliament. One must ask oneself what differentiates the plight of Bridget, who at least has had the opportunity to taste both the sweetness and bitterness of life, with those lives that would be legally extinguished in late-term pregnancy under the terms of the bill, now facing concerted opposition in the upper house. Many children born prematurely, from 26 weeks onward, survive to live fruitful lives. So the notion of a viable individual life cannot be in question here. Would the termination at 32 weeks of an unborn-but-viable child with the same conditions as Bridget elicit the same compassion from Ms Lane and the noisy feminists who are most vocal on this issue?

The ubiquitous Jane “Rent a Quote” Caro that same afternoon on The Drum was heard to parrot the feminist raison d’etre for unrestricted abortion: a women’s complete autonomy over her body is the most fundamental human right. It is a right, however, that seemingly doesn’t extend to the late-term Bridgets of this world. The notion of complete and unfettered autonomy over one’s body is a myth. One does not have ultimate autonomy over the ageing process, the onset of menopause or the beating of one’s heart — the list of things over which humans have no control whatsoever goes on and on. The ‘complete autonomy’ mantra is a socially constructed fallacy that exists superficially against underlying and immutable biological realities. One of those realities is pregnancy.

What should not be questioned as ‘a fundamental human right’ is protection from violence and death inflicted on a defenceless and voiceless unborn late-term child. One might regard regard respect for this principle as a basic marker of the compassion (or otherwise) of a society.

Increasingly, feminists weaponise pregnancy, and where they choose to point the barrel depends on the political objective of the moment. When lobbying for everything from workplace reforms to the provision of welfare and adequate healthcare, pregnancy is a blessing and the most precious gift a woman can bring to this world. Fittingly, we are often reminded of the trauma that is associated with miscarriage, especially in late-term, and as a society we are asked to extend our deepest sympathies when such misfortunes occur. Yet, in the following breath, we are apt to be told it is a woman’s prerogative to terminate a child’s life in as circumstances and preference dictate. The difference between exalting a pregnancy and terminating it appears to be the convenience or otherwise an in-utero life represents to the parents.

It would seem that what is actually in play here is the insatiable appetite of feminists to demand power and privilege under the false auspice of “fundamental human rights”, all wrapped up in a generational narcissism that is happy to sacrifice a human life on the altar of privilege.  The process that results in pregnancies is a biological reality blind to the social constructs of feminist cant and inconsistency. Reproduction is quintessentially binary, something that leftist social engineers struggle to accept and which is manifested in their insistence that men should have no say in a partner’s ‘right’ to abort. The binding of male and female sex cells generates an entirely new and unique whole.

The resultant child is a vulnerable being, utterly reliant on parents for its survival throughout early childhood. Removing responsibility in a callous and expedient manner to care for a new life, as occurs with abortion beyond 22 weeks, is essentially a trashing of a universal biological pact, the same pact that allowed the aborting mother to exist in the first place.

Perhaps the last word should go to Ukrainian paediatric nurse Marina Boyko, who visits Bridget four times every week and has taken it upon herself to look after the child’s best interests. Asked what she thought of Bridget’s plight, she had this to say: “You can’t judge a child as soon as it is born … if I met the Americans I would tell them that they have an amazing daughter … for me she is the best, most beautiful, most joyous, most intelligent child that can ever exist.

“I simply love her — I can’t say anything more.”

Those pressuring the NSW upper house to pass the abortion bill, which enshrines amongst its other outrages the “right” to abort if the foetus is not the wished-for gender, might want to let Nurse Boyko’s words sink in.

A Visit with My Local Member