The Rx for Vigorous Economic Growth 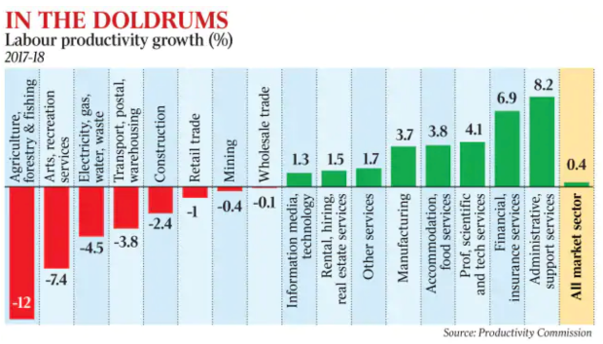 The Productivity Commission’s latest bulletin shows labour productivity annual growth has fallen over recent years, from an average of around 2.5 per cent since 1975/6 down to a negligible increase in 2017/8. Capital growth was also lower and the contribution to output from capital deepening was actually negative.

This has ignited a debate on the health of the economy, especially as Greg Jericho in the Guardian points out, “Government spending accounted of 79 per cent of GDP growth in the past year – a level only marginally below what happened during the massive stimulus years of the GFC.”

But the debate about what needs to be done seems to be between the Keynesians, who want to see government stimulation through lowering taxes and increasing spending, and those who want an alternative means of government stimulation through increasing the supply of money via lower interest rates. Central planners and most of the media never seem to learn that government intervention will only exacerbate any underlying imbalance. We can only increase productivity and growth through deregulating supply and no longer discouraging savings and investment.

At least Treasurer Josh Frydenberg proclaims himself open to other options. He says, “I’ll be having discussions with my international counterparts about productivity-enhancing reforms in their own economies.”  It is, however, unlikely he’ll find too many good ideas beyond those of the Trump administration at the forthcoming meeting in Japan of the G20 finance ministers. Other leaders will be promoting the stimulatory lines favoured by the RBA and Commonwealth Treasury.

The fact is that we have an upward trajectory of government spending with none of the Rudd/Gillard new expenditure patterns — disabilities, education, even climate spending — being reversed and taxation continuing to impede entrepreneurial activity with company taxes well out of line with those overseas.  This is the cause of the growth slowdown.

Productivity-enhancing reforms at the economy-wide level mean lowering government spending, especially on things other than infrastructure, and ensuring a flatter system of taxation. In addition, there are sector-by-sector reforms that can have a positive effect, as was the case in the deregulation/privatisation era of the 1990s.

A starting point when considering where the effort should be directed is to examine the performance of the different sectors. There has been a marked difference in productivity trends, both between industry groups and, over time, within industry groups.  Atop this page are the PC’s estimates of labour productivity in the latest year, productivity over time, and investment trends.

It is noteworthy that agriculture and electricity, gas, waste and water were two activities which saw considerable falls in productivity in the latest year.

The 12 per cent fall in labour productivity in agriculture, forestry and fishing was attributed by the PC to the drought.  But productivity also fell, albeit by only 0.4 per cent a year, in the previous six years.  The sector saw investment growing at 4.9 per cent a year 2014/5-2017/8, which actually exceeded the previous 40 years average growth.  There has been an increased regulatory squeeze on the sector (contributing to farmer unrest and, consequently, the replacement of NSW National with three MPs from the Shooters, Fishers and Farmers).  Importantly, the excision of 2,750 gigalitres of Murray Darling water from farmer inputs for “environmental flows” is equivalent to perhaps a quarter of the high security water available.  It is hard  not to conclude that this policy of steadily reducing irrigation water availability in the Murray Darling, responsible for 40 per cent of agricultural output, was a factor in declining productivity.  Reversing the redirection of water uses to (often spurious) environmental goals and back to fruitful production is a clear area for reform.

The decline in labour productivity in the utilities sector is similarly driven by policy.  Average growth in investment in the energy and water sector increased to 10 per cent annually from 2014/5 to 2017/8, up from an average 3.7 per cent in the previous 40 years.  Following a very substantial increase in labour productivity in the 1990s as a result of the industries being opened up to competition with corporatisation and privatisation, a decline in labour productivity growth has been underway since 2003/4.  Over the past 15 years we have seen a re-regulation with the requirements to incorporate low productivity renewable energy into the mix, resistance to new gas and coal developments, a considerable heightening of environmental restraints on output and far greater reporting requirements.  Again, the way forward is a deregulation program.

It is difficult to explain the arts and recreational services fall in labour productivity.  Investment trends have remained solid, but one influence on this sector may derive from technology bringing more in-house leisure opportunities and on-line shopping and goods delivery affecting retail, transport and warehousing.  If that were the case the measured slowdown is more apparent than real.

The economy is facing a prolonged slowdown as a result of political interference in key areas being compounded by other, technology-based causes.  We have been through two decades during which additional regulatory measures have been imposed on the productive sector with only superficial de-regulatory roll-backs.

Future policy, if we wish to see higher living standards, requires both an assault of regulatory measures and a winding back of government as a share of GDP generally.

2 thoughts on “The Rx for Vigorous Economic Growth”

An ARC/ABC duet that should top the hit parade