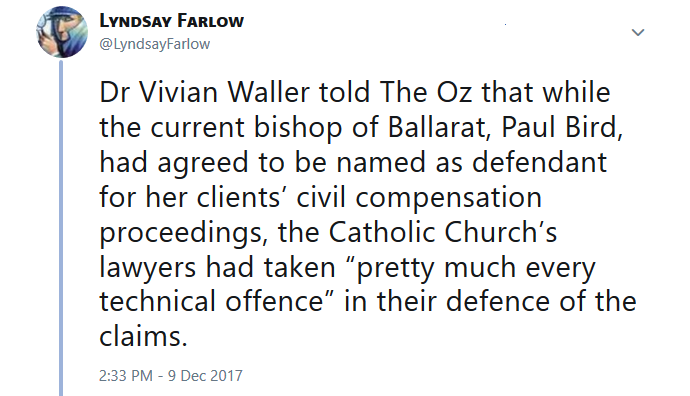 Vivian Waller is the principal lawyer at Waller Legal, a Melbourne-based firm she set up in 2007 that specialises in winning compensation for historic cases of sexual abuse against the Catholic Church. In 2018 Waller represented the complainant in a case that led to the imprisonment of Cardinal George Pell.

To my knowledge, Waller does not tweet under her own name but the Twitter handle @LyndsayFarlow champions her in many ways. It is true the nom de plume “Lyndsay Farlow” is not solely concerned to speak for Waller, but the common concerns are clear enough (which in turn are also shared by victims’ advocacy groups such as Broken Rites). These need to be highlighted especially given the revelations about Operation Tethering.

Set up in 2013 by Victoria Police, Operation Tethering became publicly known five years later when, at Pell’s committal, Detective Superintendent Paul Sheridan admitted Pell had been identified as a target long before any complaints were received from purported victims. Defence counsel Robert Richter QC understandably characterised the trawling expedition as “Get Pell.” Presumably the staff for this operation overlapped considerably with that of Taskforce Sano, set up on November 30, 2012, which was created in the wake of the Victorian Parliamentary Inquiry into Child Sex Abuse. Sano would later feed into the Royal Commission into Institutional Responses into Child Sexual Abuse that Julia Gillard set up on November 12, 2012. Given its focus on Melbourne and Ballarat, we may wonder whether Gillard was putting in place a “Get Pell” commission.

Farlow (of course) never mentions Tethering, but the Twitter feed shows an interest in Sano from its inception. Thus the hashtag #TFSano yields 11 tweets, all from Farlow dating from February 2013;[1] #SanoTF yields three tweets, again all from Farlow.[2] The only other handle showing comparable interest is that of “survivors” group @Clan_Au with whom Farlow also came to be associated – though not as closely as with Broken Rites. Farlow follows all the key steps, reporting from the early months of 2013 when Sano/Tethering began its work,[3] noting the police call for information about abuse in Melbourne Cathedral in December 2015,[4] and (when it was leaked in February 2016) the fact that police were investigating Pell.[5] Farlow also reports when, after Louise Milligan’s ABC programme in July 2016, the police first publicly acknowledge their investigation.[6] After Pell had been convicted, Farlow somehow manages to ‘like’ a Walleresque tweet[7] from the head of Sano Doug Smith – no mean feat given that Smith, who only started tweeting in March 2019, has just four tweets (replies) and just eight followers!

What of Farlow’s apparent closeness to Waller?

In general we note how Farlow’s legal eye shows an interest in the case numbers of sexual abuse charges and the legal firms associated with Waller: Slater and Gordon in 88 tweets,[8] Maurice Blackburn in 16.[9] However, in particular, we can note how Farlow picks up on convicted pedophile Robert Best: three dozen tweets over five years.[10] Thus, Farlow covers the story of the Christian Brother convicted of sex abuse in 2012,[11] and later provides an interview with the person who was raped in 2014.[12] This is highly significant given that Waller gave evidence to a parliamentary inquiry to the effect that Best’s victim (represented by Waller) complained that Pell was then present[13]. Pell would contest this falsehood, demonstrating that he was never there at the time. [14]

Then there is Waller’s particular expertise stemming from her doctoral research regarding the statute of limitations for child sexual abuse,[15] her “particular passion” as she put it in an interview.[16] Farlow has tweeted on this topic on 36 occasions, especially in 2012.[17] We also observe themes from Waller’s very practical doctoral research, such as child sexual abuse as a cause of Post Traumatic Stress Disorder: a score of tweets with #PTSD since 2011.[18] This theme of the long-term effects of the trauma of sex abuse was the topic of Doug Smith’s reply on March 9, 2019, mentioned above.

Finally we note the alacrity in spotting a reference to Waller even when her name was spelt “Vivien” (and there are only three instances in the whole of Twitter). We found a ‘like’ in which the lawyer is praised by an interviewer.[19] Perhaps most fulsome is a long thread of 21 tweets on December 8, 2017, expounding Waller’s legal technicalities in the Ridsdale case.[20]

We cannot say that Farlow is Waller, for in 2015 we have also noted a misspelling, Vivienne. Perhaps Farlow is a team. I count about 50 tweets in the first three months since Farlow started tweeting in 2009, but the grand total now indicates an average of over 100 a day. Also, it does not appear that Farlow was associated with Waller from the first, this link emerging from the time of Sano/Tethering. Rather, Farlow’s earlier connections appear journalistic, for example, 50 mentions of David Marr from 2010. Just how Farlow came to champion Waller is unclear. Still, this lack of transparency deserves scrutiny.

We will concentrate on Farlow’s tweets at the time when Pell’s complainant “J” went to the police, June 2015. At that time a witch-hunt was underway: just one month earlier, The Age had to apologise for a Die Pell post that appeared on its Facebook page. Whilst we have no evidence of any connection with Farlow, the tenor of Farlow’s tweets are equally disturbing.

The Twitter feed is pockmarked by insults and scurrilous cartoons. Pell is egocentric,[21] has no nous,[22] lacks self-awareness,[23] he crushes victims,[24] threatens them, ignores their pain,[25] and “may” have been involved in Australia’s worst cover-up. Farlow even seems to condone defamation, faulting Pell for over-sensitivity when he has recourse to law against the ABC who refer to him as a sociopath.[26]

And on the day before the June 2015 complaint was made we can contemplate a cartoon in which a crozier hooks the “untouchable” Pell, compelling the Cardinal to come home. [27]

Even ecology becomes a weapon. On the day the complainant went to the police Farlow tells us that Pell must be feeling awkward. [28] At that time Pope Francis had published Laudato Si’, and so with the twitter feed’s solitary reference to the encyclical we learn that the Cardinal is an enemy of the Pope.[29]

Overarching these barbs, is Pell’s performance in the Royal Commission, Farlow’s concern since its conception in 2012. Here the special interest is redress – an issue not absent from Waller Legal’s website, or indeed, of that of Broken Rites. Compensation should never be capped, as per Pell’s Melbourne Response. Pell is personally characterised as being solely interested in money.[30] Indeed, he “strategically conspired to destroy John Ellis.”[31] Farlow erupts: Pell “Lied under oath. Shame. Shame. Shame.”[32]

Such was the social media hate campaign conducted against Cardinal Pell. Within this context we find a tweet highly suggestive of the febrile mentality and just three weeks before the complainant went to the police. Farlow had often (though not recently) mentioned Rolling Stone, and on May 28, 2015, tweeted a link to an article by Sabrina Erdely about Billy Doe, an altar boy whose lurid testimony convicted more than one priest in Philadelphia.[33] Erdely’s message is very aptly summed up by Farlow’s hashtag: #AllRoadsLeadToRome. The subtext was this is what priests get up to. This is what Rome covers up.

The trouble for Farlow, though, was that Billy Doe turned out to be a fabricator. In 2016 Ralph Cipriano would show in Newsweek how this ludicrous case managed to hoodwink a jury. It’s difficult to imagine that Waller would not have known about this case, one that ought to have set alarm bells ringing.

There is, however, yet another coincidence that may set further alarm bells ringing, for that same morning Farlow had been communicating with the ABC’s Louise Milligan.[34] Obviously, the pair were not discussing Pell, rather, some technical difficulties of loading a video (and the pair will not communicate again until the story of Billy Doe resurfaces as a possible source for the lurid testimony against Pell). It would be nine months later when Milligan would “reluctantly” start work on the Pell allegations, getting a tip about “J” or “the “Kid”, as she calls him, whom she would endorse (just after Sano’s Doug Smith had retired, incidentally). She would be the first to provide detail on the allegations, eventually publishing her award-winning Cardinal in 2017.

We wonder, then, about the covert attempts to undermine Pell. The indications from the open sources are that the lawyers standing to benefit from Pell’s conviction or those closely associated have attempted to tether him, not only by a Get Pell police operation but by a witch-hunt in social media. These indications, I suggest, warrant a closer scrutiny of the network I have highlighted.

Chris S. Friel is a philosopher and theologian who publishes on Academia from Cardiff, Wales. His work is at https://chrisfriel.academia.edu

[14] https://www.heraldsun.com.au/blogs/andrew-bolt/saying-sorry-to-pell-now–the-damage-is-done-twice-over/news-story/e6a5d2a61b4812a2ca80cda0d9effd6e. For a letter to the inquiry from Katrina Lee, speaking for Pell see: https://www.parliament.vic.gov.au/images/stories/committees/fcdc/inquiries/57th/Child_Abuse_Inquiry/Right_of_Reply/Right_of_Reply_Archdiocese_of_Sydney.pdf

Our Flawed And Failing Universities