The Oddly Named Boy from Frogmore 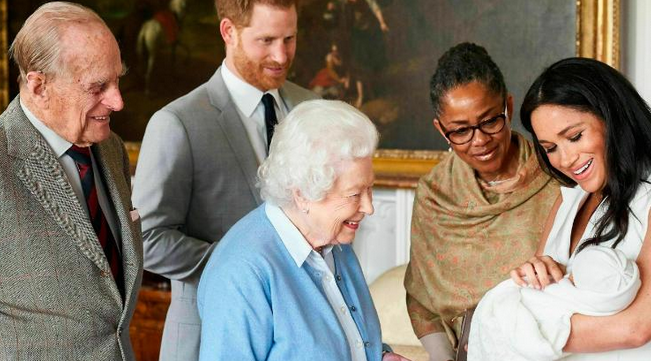 It had been a long wait along the Long Walk at Windsor Castle for the latest member of the Royal Family. For more impatient royal watchers, the Duchess of Sussex’s gestation seemed akin to that of Dumbo the Elephant. Perhaps this image was on the ducal minds when they announced their firstborn’s name and style; deciding, for the time being, not to burden him with the courtesy title of the Earl of Dumbarton, first created by James II for one of his soldiers, a Douglas, and revived by the Queen for her grandson.

And so, Archie Harrison Mountbatten-Windsor has begun life as a master of his Universe. Master Archie has no need for courtesy. The Earldom of Dumbarton is, after all, a mere subsidiary title (although his father’s second, gung-ho, warrior-like subsidiary, Lord Kilkeel, must have been hard to refuse). And why trifle with an Earldom when a Princely title will come his way, by law (1917), on the accession of his grandfather as Charles III? Unless his parents decide otherwise, the boy from Frogmore will turn in an instant into a Prince and the Empire will have its own Prince Archie of Sussex.

And the choice of Archie? Some early Wessex bishops favoured the name but an Archibald has never ruled or reigned as King. However, those fearsome fighters north of the border — the Campbells, Douglases and Stewarts — have christened their scions Archibald. Interestingly, the two earlier Earls of Dumbarton were Douglases – and bold, but not Archibald.

The Sussexes have chosen to use the diminutive from the fount, as it were. Not Albert, then Bertie; or Henry, then Harry but Archie from the outset. A bold decision reflecting the name’s meaning. It is confident and strong with an Edwardian echo and a whiff of Wodehouse. That (other) Master, PG Wodehouse, dubbed at least two of his characters Archie, both nephews. The first, Archie Moffam (pronounced Moom, of course) is the hero of The Indiscretions of Archie (1921), the handsome, long-haired nephew of the Duke of Dunstable, prone to on-and-off engagements and always in a scrape.  The second is Archibald Mulliner, a member of the Drones Club and sock-collecting nephew of Mr Mulliner, who can mimic a hen laying an egg.

Across the Atlantic, a less cerebral literary form gave birth to Archie Andrews (at right), the carrot-haired, comic book hero. The Daily Express has reported that Thomas Markle would read the adventures of Archie to his young daughter. One can easily draw too long a bow but is it a stroke of woke to point to one of Archie’s girlfriends, Valerie Smith, a talented bass-playing singer-songwriter and band-member of the Pussycats, said to be one of the first African-American female cartoon characters? And yet, speaking of pussycats, another tabloid report suggests the Duchess has named her son in honour of a beloved pet called Archie. Finally, another neat twist is a report in Vanity Fair that in January when walking with his grandmother Carol, Prince George told a woman who stopped to say hello, that he was called Archie!

Before we leave the As, there is the great non (or former) Archie Leach, born in Bristol in 1904 to a tailor’s presser and a seamstress. He morphed into Cary Grant, the enduring epitome of Hollywood elegance, wit and grace — in short, a King of the Silver Screen. He starred in Bringing Up Baby, a screw-ball comedy that is unlikely to give the Sussexes much in the way of child-rearing tips, given Baby was a leopard. It is fascinating to learn that Cary’s current successor, George Clooney, shares his birthday with young Archie. As a friend of his parents and a hip, politically-savvy, liberal-leaning legend, George is surely an irresistible godfather. If one is astrologically minded, it is fascinating to find other legends born on May 6 – Pope Innocent X, Sigmund Freud, Rudolph Valentino, Orson Welles, and the Marquess of Bath. So, the young royal has no shortage of inspiration.

As a cousin of the heir of his generation, young Archie is never likely to wear the crown. Today he is but seventh in line to the throne, as were Hon Gerald Lascelles and Lady Sarah Armstrong-Jones were in their time. As things stand, he would not need his sovereign’s permission to marry. Of course, on the deaths of great-grandmother Elizabeth, and grandfather Charles, he could move to fourth; but as cousins, George, Charlotte and Louis wed and beget heirs, the likelihood of making the Coronation Oath will become increasingly remote.

It is now seven decades since Prince Philip, newly married to then-Princess Elizabeth, pressed for recognition of his name in the royal line. Philip’s ambitious Uncle Dicky, Lord Mountbatten (born, like Archie, at Frogmore), was especially keen to see his family name coupling or conquering that of Windsor. Queen Mary and most of the Court formed an alliance with Prime Minister Winston Churchill to ensure that there were no winds of change. And the House of Windsor it has remained. Prince Philip was greatly distressed. He felt he had been reduced to being ‘a bloody amoeba’.  But then, in 1960, at the Queen’s bidding, the Privy Council declared the name Mountbatten-Windsor would apply to all male-line descendants of the Queen who did not carry royal styles and titles. One can understand now why great-grandfather Philip was beaming so broadly in the first photo-call with Archie. A bloody amoeba no longer, the Duke of Edinburgh has two grandchildren, Lady Louise and James, Viscount Severn, and now a great-grandson who proudly bear the name of Mountbatten and Windsor.

There is celebration across the Atlantic, too, as Americans can claim half a royal life. The objection to an American divorcée, Wallis Warfield Simpson, eight decades ago now seems prejudiced and petty (of course, it is so easy to be revisionist) but this is not the first drop of American blood. Diana Spencer’s grandfather,  Maurice, 4th Baron Fermoy, was half-American, the son of Frances Work, the daughter of  stockbroker and protégé of Cornelius Vanderbilt.

The joy of his father was both spontaneous and infectious, as he shared the news with the impatient media outside the Royal Mews at Windsor Castle. He even appeared to thank the horses in their stalls behind him. One of the boxes was labelled ‘Sir John’. This was the most sublime vice/royal/equine moment since Granny’s representative, a florid Sir John Kerr, congratulated Gold and Black for its win at the 1977 Melbourne Cup (which led to calls for him to be made Lord Warden of the Sank Port).

Archie has been born in the month that marks the bicentenary of the birth of Queen Victoria, the mother of the Empire. Since that time, her great-great-granddaughter, Elizabeth II, has become the mother of the Commonwealth and welcomes her own great-grandson during the seventieth anniversary of the first Commonwealth Day in 1949. Archie is the twentieth descendant of his great-grandmother and the youngest member of the House of Windsor, a dynasty, which took its name from a proclamation by her grandfather, George V, whose reign began, coincidentally, on May 6, 1910.

There is so much that is novel, original, bold, and true about this boy. He may not reign but long may he thrive.

Ukraine’s Song Of The Supine