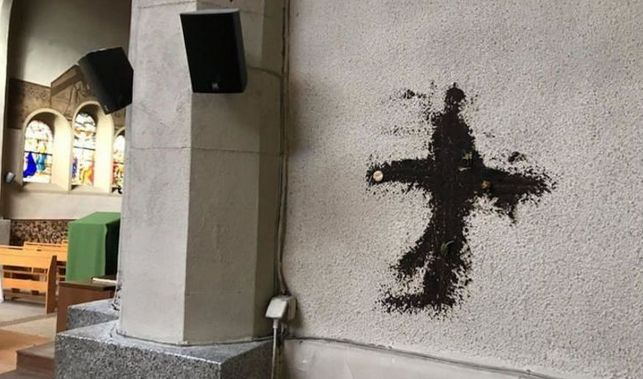 One doesn’t need to be a conspiracy addict to be surprised at the speed with which Parisian authorities declared the devastating fire in Notre Dame Cathedral an accident — or to raise an eyebrow at the invention of the bland new phrase for its cause: “involuntary destruction by fire.”

The coincidence that the most important Christian church in Paris should go up in smoke in Holy Week, just a month after an arsonist set fire to the church of Saint-Sulpice, seems to have passed largely without comment in the mainstream media. That first blaze was started shortly after the midday Mass and did several hundred million euros damage before firemen brought it under control.

At about the same time, the Basilica of Saint Denis, a mediaeval abbey church in the north of Paris, was vandalised. The church houses the tombs of French kings from the 10th to the 18th century and includes, significantly, that of Charles Martel, who ended the Muslim invasion of Europe with his victory at the battle of Tours in 732. The attack heavily damaged the 200-year old organ as well as smashing stained glass windows. Saint Denis is in a ‘no-go’ suburb.  A Pakistani migrant who arrived in France only two months ago has been charged with causing the damage.

In Nîmes, the ancient Roman city in the Gard Department of Provence, the church Notre-Dame-des-Enfants was desecrated, the main altar looted and a cross smeared on the walls with human excrement.  Again, there was a link to the Christian defeat of the Muslim Umayyad Caliphate which had enslaved southern Europe. Charles Martel’s 736 expedition destroyed the city; in 752 Pepin the Short finally ended Muslim rule there.

In just eleven days, nine churches were damaged or desecrated in what appeared to be a coordinated attack across France. They included the towns of

# Vienne, south of Lyons, the church of St Vincent de Naintre. At the Council of Vienne in 1311 Pope Clement V abolished the order of the Knights Templar.

# Angouleme in the Charente Department in the south of France. The evangelical church of Hope and Life was damaged in the town where Crusaders murdered 3000 Jews in 1256.

# Lavaur in Tarn, southern France, the scene of religious wars of the 16th century.

# Maisons-Lafitte and Houilles, two towns in the Île-de-France region north-west of Paris.

Notwithstanding the immediate response that implicitly ruled out terrorism and connections with earlier atrocities, a serious investigation of the cause, origin and seat of the fire in Notre Dame is now underway.  Before the last flames were extinguished, Paris Prosecutor Rémy Heitz opened a preliminary investigation by the judicial police. The next day, while backing away from the quaint excuse, and favouring the theory of an accident, he set fifty investigators to work.

Five companies had been contracted to carry out a total of €150 million worth of renovations to the cathedral, starting with the roof. One of the companies, Europe Echafaudage was engaged in 2017 to work on the spire but insists that none of the 12 men on the project were on the job at the time.  A huge mesh of scaffolding was being erected over the roof, and one of the first explanations was that welding had caused the fire. Australian scaffolding is assembled with self-locking pins but it is not yet known if the French system was fitted or welded.

The investigators will want to known from witnesses where the fire was first seen, in what form, and the colour of the flames. That last clue could indicate what was burning and whether an accelerant had been present.

France has 42,258 churches, and they are coming increasingly under attack. Last year, 875 were vandalised, according to police, as were 59 cemeteries. After centuries of protection and safety, Christians and their churches are now easy targets for terrorists aiming to reverse the Islamic defeats of the 15th and 16th centuries. In this modern secular world, it is not only Saint-Sulpice and Notre Dame — Europe itself is burning.

The Real Story is the ABC

Evidence, Memory and the Law