Mourning a Massacre with the Veil of Oppression 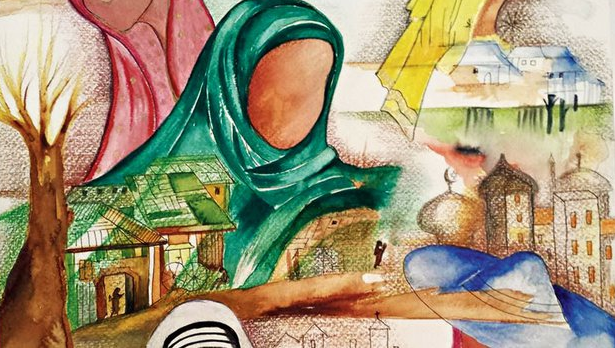 This from BBC News on May 19 last year:

It is five years since Iranian Masih Alinejad started a movement – since joined by thousands of women – protesting against the compulsory wearing of the hijab, or headscarf, in her country. It spread on social media and led to unprecedented demonstrations in the streets …Niloofar (not her real name) was arrested for demonstrating against the mandatory hijab. She says she was held in solitary confinement and subjected to torture and beatings. An active member of the movement who still lives in Iran, she says that through Masih’s campaigns “ordinary people get together to make the government react”.

Now let’s cut to New Zealand and Jacinda Ardern draping herself in a headscarf to signify solidarity with Muslims. Reportedly, New Zealand women generally were encouraged to wear a scarf to show their solidarity. A heavily-armed policewoman is pictured in newspapers with a headscarf while guarding a funeral of one of the victims of the shootings. It is false, it is virtue-signaling, and it is sickeningly unsupportive of brave Muslim women trying to throw off their oppression along with their scarfs.

It was a terrible event in New Zealand. An outpouring of grief and sympathy should be forthcoming. But perspective is required. You don’t have to show sympathy by donning clothing which is used in so many places to keep so many women in check and under the yolk of religious fundamentalists.

Women of the West should worry less about breaking through what is now an illusory glass ceiling and worry more about protecting their hard-won liberation. In fact, both we men and women of the West need to cherish the freedom won by our forebears; a good part of which stemmed from the separation of church from state. “Render to Caesar the things that are Caesar’s,” has echoed bountifully down the centuries.

When a tragedy like that in New Zealand happens, in almost all cases it is best to keep all generalisations, grand gestures, and politics out of it. At least for a respectful interval. It is time to feel for the victims and their families. Yet people who should know better go around laying blame.

Even Chelsea Clinton, for Heaven’s sake, was harangued by an activist for being complicit in the shooting because she had previously criticisedMuslim Congresswoman Ilhan Omar’s antisemitic remarks. Anyone of note who had ever expressed concern about Islam was blamed. Donald Trump was blamed, of course, but that is simply reflexive. He is routinely blamed for everything by the Left.

This brings me to Fraser Anning – the bogeyman of the reputable class. Now I have made no study of Senator Anning. I don’t think he should be in parliament but that is because he got so few votes; nothing else. And he can’t be personally faulted for the flawed voting system that we have been gifted by our parliamentary representatives. However, to stick with my view about these matters, his comments on the New Zealand tragedy were ill-timed. He should have kept schtum. Even then, some of his comments (though not all) in his March 15 statement struck a discordant note. At the least he needs better help in framing his words.

Many people of standing (e.g., Mark Steyn, Douglas Murray, Mark Durie, Ayaan Hirsi Ali, to name just a few) are concerned about Muslim immigration and the violent and supremacist tenets of the Muslim faith. I share that concern. At the same time, I wouldn’t say, as did Anning, that “the real cause of the bloodshed on New Zealand streets today is the immigration program which allowed Muslim fanatics to migrate to New Zealand in the first place.”

I wouldn’t say this because it is patently not true. There is no evidence at all that the alleged perpetrator was influenced one iota by the presence or otherwise of “Muslim fanatics” in New Zealand. It seems, from the information available thus far, that his decision was opportunistic, based upon a seething resentment he had built up in Europe.

More than this, it is totally counterproductive to deflect from the culpability of the perpetrator to the effect of some societal condition. We have seen that playbook applied too often when Islamic terror has struck – as it does, be reminded, each day somewhere in the world. (The Religion of Peace website lists 121 Islamic attacks in the thirty days to March 22, which killed 726 people and injured another 786.)

Anning is a provocateur, it is fair to say, I think. He should expect strident verbal criticism. Both his statement and the resulting criticism should be protected free speech. Someone has got together a petition to remove Anning from parliament signed, allegedly, by 1.3 million Australians. Luckily the mob can’t remove a parliamentarian from office. But, again, getting such a petition together is another valuable form of free speech.

What isn’t part of free speech is smashing a raw egg on Anning’s head. Neither, in my view, is the Prime Minister calling for the full force of the law to be brought down on Anning for his understandable reaction to being egged in that fashion. Scott Morrison had no business, from his elevated office of state, making that gratuitous and authoritarian comment. Why not bring the full force of the law down on the person who attacked first? Here is an idea: Why not just leave it to the police to sort things out? Morrison should know better and it is regrettable that his instincts led him to speak so intemperately.

All in all, the tragedy In New Zealand didn’t bring out the best in people, which is what the victims and their families deserved. While police and security forces might be called upon to widen the scope of their activities and act expeditiously, for commentators and politicians there is time enough for looking at the broader picture after funerals have taken place.

The One Word We’re Not Hearing: ‘Alleged’

Quote me! Quote me!