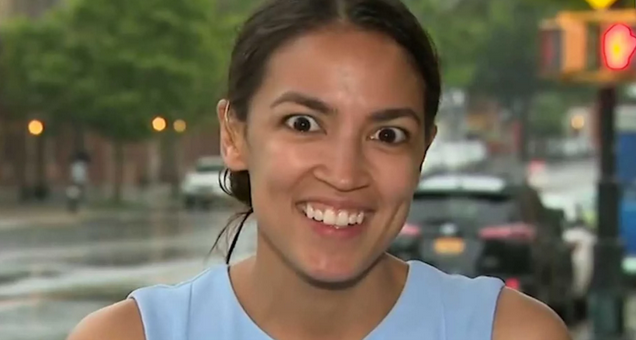 FRENETICALLY outflanking each other, leftists in the United States have taken themselves to the brink of madness and beyond. Alexandria Ocasio-Cortez’s (above) Green New Deal (GND) is conclusive proof of that. And, be warned, where the US goes others might well eventually follow. Whom the gods would destroy they first make mad, is a well-known aphorism of disputed origin. Let’s hope it proves to be true in this case, lest the current wave of socialists do what they’re best at: condemning us to shortages, deprivations and, eventually, to despotism and gulags.

The GND is steering the Democrat ship so hard to port that the old guard (Pelosi, Schumer, Biden, et al) are clinging onto the starboard rails for dear life. It is inane of course – free education, free child care, pleasant houses for all, good high-wage jobs for all, high-quality health care for all, universal access to healthy food, refitting all buildings for climate efficiency, meeting 100 percent of power through clean renewable emission-free energy, replacing air travel with fast trains, removing greenhouse emissions from agriculture; and so on, and so on, into Wonderland and through the Looking Glass.

Its sheer silliness is a comfort. Surely, no one can take it seriously? Wait on! According to the Washington Examiner on Feb 11, 67 House Democrats had signed onto the GND. Fox News reported a few days earlier that “seven senators either running for the Democratic presidential nomination or seriously weighing White House bids have signed on.”

I don’t know who has since signed on but I suspect that there is only upside to the numbers. After all, left-wing mobs can make life difficult for those who don’t fall in behind Ocasio-Cortez. Now, to be clear, the danger is not that the GND would ever be implemented. That would be impossible. The danger is that it is shifting the Democratic Party’s centre far to the left. What would have been on the fringe only a few short years ago is becoming mainstream.

I caught Tucker Carlson interviewing Democrat commentator Chis Hahn (past assistant to Senator Schumer) on his show. Hahn defends the indefensible GND as simply a tactic to shift the political spectrum to the centre-left by starting at the “very far left.” Carlson, the grounded person in the room, finds this risible. By this reasoning, he says, someone really wanting a sensible centrist policy on combatting crime, might propose that “anyone accused of a crime should be summarily executed in the street.” He adds, “shouldn’t elected officials say what they really want instead of saying crazy things to move the Overton window or whatever.”

Carlson is right. It is risible. Leftists do say crazy things. But it is a mistake to think that their craziness can be rebutted with reason. They can’t be reasoned with. They have a moral attachment to their worldview. Facts and logic are not allowed to get in the way. This is Ocasio-Cortez summing it up: “I think that there’s a lot of people more concerned about being precisely, factually, and semantically correct than about being morally right.” There ain’t no arguing with those who believe they have a lien on morality.

Jeremy Corbyn is a bit of a laggard in the lefty stakes. At this stage, his agenda is far less out-there than is the evolving Democrat agenda in the US. But he is trying.

Familiar aspirations of any British Labour Party, like increasing the power of trade unions, providing free higher education and increasing taxes on the wealthy, are not enough for Corbyn. He wants to up the ante by renationalising utilities in the UK. He particularly has the railways and the six energy companies in his sights. He also wants the Bank of England to “print money” to fund national infrastructure and low-cost housing. And, in this, he is armed (as by the way is Bernie Sanders) with support from cranks mingling among Post-Keynesian economists. They are disciples of so-called “modern monetary theory.” Look it up. It will be increasingly adopted by the political left. It is the new road to socialism.

Of course, Corbyn is in bed with the Palestinians, and Islamists more generally, and is viscerally anti-Israel; but then this stance is now par for the course among the Left. The Left and Islam are intertwined. The Danse Macabre seems a fitting characterisation.

The problem with Corbyn’s economic policies, as with all socialist policies, is that they will not work. Trains will not run on time. Energy will cost more. Printing money in the quantities required to serve Corbyn’s ambitions always ends in tears of high interest rates and inflation or, alternatively, crippling taxation to counter monetary excesses. UK industry will become less competitive. Private investment will plummet. Unemployment, poverty and misery will rise. What then?

Corbyn would undoubtedly point the finger of blame elsewhere. All socialist leaders do that when their policies inevitably produce misery. What he wouldn’t do is to reverse his policies; which, in his mind, we can safely assume, are taken from a Marxian tablet of stone.

You might believe that socialism is a step too far for most voters – at least in the English-speaking world. But beware the growing voting power of the naïve young. Gallup in the US recently found that 51 percent of those aged from 18 to 29 years favoured socialism. An estimated 63 per cent of those in the same age group voted for Corbyn-led Labour in the UK’s 2017 General Election (YouGov survey).

Finally, it says something positive about Australia that our leftists are more moderate than overseas varieties. Sure, Labor wants to tax people and companies more, give unions more power, cripple Australian industry with renewable energy; and, in order to salve our collective consciences, let in many more refugees. Nevertheless, this is still off the pace set by leftists in the USA and UK. But here is a depressing thought: give our leftists time. The inner-city melding of Labor with the Greens and with increasing doses of Islam does not bode well. The hope is that left-extremism will come with overwhelming electoral cost. But will it?

Going Down for Allah