London Diary of a Brexiteer

Stepping back and forth between the world’s two longitudinal hemispheres is fun in a quirky sort of way.  Of course it requires you to be positioned right above the Prime Meridian.  And that, in turn, means you must have decided to spend a London afternoon over in Greenwich, a few miles down-river along a now much cleaned-up Thames and more or less across from Canary Wharf.  If you’d somehow been asleep for a quarter of a millennium, and were wholly unaware of Britain’s Empire years, you’d soon be set straight when you visited Greenwich.  It’s magnificent!

My wife and I spent a day this past weekend re-acquainting ourselves with this London borough where you’ll find the National Maritime Museum (magnificent!), the Old Naval College (which in its original incarnation had been a retirement home for Royal Navy sailors and is partly a Christopher Wren creation with a splendid chapel), the seventeenth-century Queen’s House, a Greenwich Market first established over three centuries ago and, of course, the Royal Observatory.  It’s at the last of those listed attractions where one can hop between hemispheres.

Remember, the east-west division of the world is wholly arbitrary in a way that the north-south split is not.  The equator is a fact imposed on the world.  Where to draw the up-down line to split the world’s west from its east is a function of nothing more than who happened to be drawing the line and what they prefered.  At the height of the British Empire, the world’s largest-ever, the people doing the preferring were in London.  And so the Prime Meridian runs right through the Royal Observatory at Greenwich.  That is why, before political correctness infected everything from banning temporal reference to the shorthand of ‘Before Christ’ to toilets and ‘renewable energy is cheaper if you just ignore the $3 billion in subsidies it gets each year’, we used to talk in terms of Greenwich Mean Time.  Everything was based on that, and the arbitrary line drawn there to separate east from west. 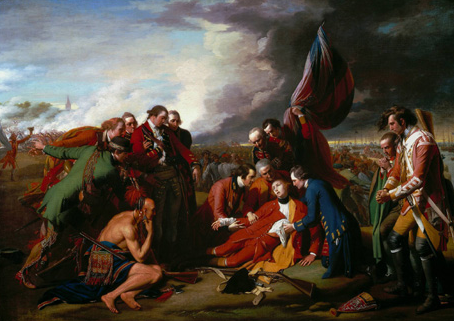 For the vast preponderance of Canadian readers – Americans, too, if you take a slightly broader view of things and recall that until the French left North America there could be no Revolutionary War – there is a statue right beside the Royal Observatory that honours the man who ensured you are able to read what I am here writing.  I refer to General James Wolfe, the man who led the British to victory on the Plains of Abraham in 1759 and whose death in that battle was famously portrayed by painter Benjamin West.  On the statue outside the Royal Observatory Wolfe is described as the Victor of Quebec, which of course he was.  The statue was unveiled in 1930, a gift from Canadians.  (Can you imagine today’s Canadian PM, Justin ‘trust fund child who never had a real job’ Trudeau doing that?  To ask is to answer.)

Anyone know who unveiled the statue at the official ceremony?  I just learned the answer this past weekend.  If you answered ‘the Marquis de Montcalm’, a direct descendant of the losing French general at that 1759 battle, then give yourself a huge pat on the back – you are a trivia God. 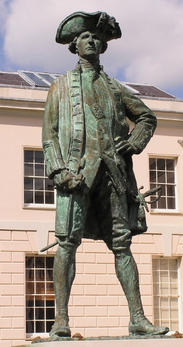 Here’s another bit of trivia that Australians might have a better chance of knowing.  To get behind the French lines on the fields of Abraham General Wolfe’s troops were navigated up the St. Lawrence, at the time a task commonly thought to be impossible, by a young Royal Navy lieutenant. This was a man who would go on to have more than a little importance in the future affairs of Australia.  In fact, he has more than a few statues in Australia today, all of which the crazier elements in the Green Party (read ‘the whole party’) and the left-wing of the Labor party would like to pull down or at least deface. For products of the modern education system who might still need a little help, his Greenwich is at right.

Here’s another random fact, one I happen to find particularly pleasing.  Both Wolfe and the young Royal Navy lieutenant, who went on to find an even wider fame than the General’s, shared the same Christian name (another term seemingly been banned by the keepers of PC orthodoxy.)  Mine.

At any rate, I came back from the day at Greenwich thinking I might re-read Niall Ferguson’s Empire.  It’s a powerful defence of the British Empire and documents a time when Britain’s political class was (I put this as neutrally as I can, you understand) somewhat more vigorous than today’s in standing up to the undemocratic forces that ruled Europe and did their best to bring Great Britain to its knees.

Jump forward a couple of centuries and British PM Theresa May begins all negotiations with the EU already on her knees.  She surrenders before she tries anything else, and if that isn’t working she tries surrendering some more.  This, alas, is the result of a Tory party deciding it would be a good idea to put a confirmed Remainer in charge of negotiating Brexit, who in turn stuffed her Cabinet with Remainers.  At this stage only the adamantine obtuseness of the EU can save Brexit.  The Tories don’t deserve that sort of luck.

All told, this Tory Party-led fiasco is a much worse sell-out of their core voters than what we’ve seen with Australia’s Liberal Party under Turnbull and the Black Hand faction. And that’s saying something indeed!

3 thoughts on “London Diary of a Brexiteer”

The Fable of All Our Lives