In Quadrant‘s October issue (subscribe here), Hal G.P. Colebatch contributes the second installment of his two-parter on TDS — Trump Derangement Syndrome — and notes how hatred of this outsider president has drawn forth a venomous insanity wherever  the Left prevails. “The Sydney Morning Herald in October, 2016, claimed that ‘Donald Trump and Adolf Hitler Have More in Common than Slogans‘,” Hal writes, adding that the globe-girdling hysteria on the Left has seen “the institutionalisation and acceptance of violence and lies.” If you scratch from the ledger of ‘progressive’ bullying the attempted massacre by a Bernie Sanders supporter of congressional Republicans training for a charity baseball game, an outrage seldom mentioned since in the mainstream media, the most vile manifestation of the Left’s principle- and decency-free strategy has been the Borking of US Supreme Court nominee Brett Kavanaugh.

Below, a selection of the slanders and misrepresentations masquerading as commentary, interspersed with rebuttals the mainstream media has found it convenient to omit. In a better world you might have come across the facts on the ABC, rather than the by-rote Democratic Party talking points the national broadcaster serves up as news. And when an agent of accuracy does get a word in edgeways, the get the treatment accorded Judith Sloan on The Drum. Skip to the 40-minute mark of this video when Judith is repeatedly shouted down by the customary stacked panel. That’s the ABC’s idea of debate, just as this off-with-the-fairies polemic from a US contributor proceeds from the premise that Kavanaugh is the beast from Central Casting and must he held responsible for the ills inflicted on women. (…the image of Dr Ford, giving her testimony, now will accompany Mr Kavanaugh for the rest of his career. The image, in fact, is that of American women of her generation and everything that they have tried to become, and what they have had to endure to do so.)

Roger Kimball’s observations are especially worthwhile, but first a couple of cartoons that further the Democrats’ guilty-until-proven-innocent framing of the Senate Judiciary Committee hearings: 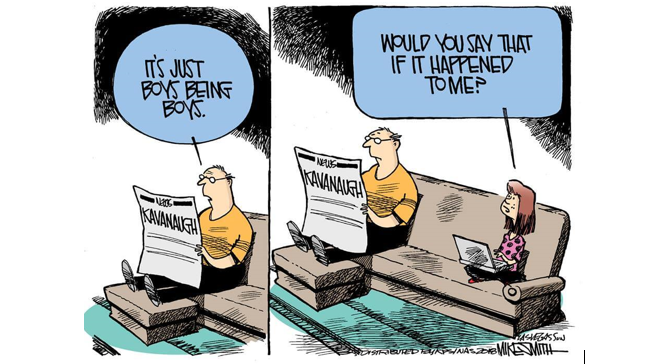 Notice the artists’ acceptance of allegation — and unsupported allegation at that — as concrete fact. Notice, too, the obscene enlistment of Kavanaugh’s daughter as a witness against her father’s decency. In the Wall Street Journal, Kimberly Strassel reacts:

…It’s a green light to send coat hangers and rape threats to Sen. Susan Collins and her staff. It is a sanction to the mob that drove Sen. Ted Cruz and his wife out of a restaurant. It is an endorsement of Sen. Dianne Feinstein, who kept the charge secret for weeks until she could use it to ambush the nominee with last-minute, unverified claims. It’s approval of the release of confidential committee material (hello, Spartacus), the overthrow of regular Senate order, and Twitter rule. It’s authorisation for a now thoroughly unprofessional press corps to continue crafting stories that rest on anonymous accusers and that twist innuendo into gang rapes. A vote against Brett Kavanaugh is a vote for Michael Avenatti.

Roger Kimball in the  Spectator US:

… in one key respect the behaviour of the Democratic senators and their febrile, power-at-any cost supporters is worse than what old Joe McCarthy did. McCarthy destroyed many careers with his wild-eyed accusations of secret Communists occupying every nook and cranny of the government. In the aftermath of the Red Scare, Leftists held up the McCarthy hearings as a sterling instance of baseless anti-Communist hysteria. But we now know, from the Venona transcripts and other sources, that the State Department and other agencies were in fact harbouring Communists who were loyal to Stalin. The witch hunt conducted against Brett Kavanaugh, by contrast, was a fantastical, utterly baseless fabrication. motivated solely by power-hungry malevolence…

Kimball once more on the Democratic smear machine that continues to conjure from long decades past a parade of women presented as scarred and suffering victims of Kavanaugh’s hunnish depradations:

Hawaii-Five-O Senator Mazie ‘Men Should Just Shut Up’ Hirono pressed autoplay number six and said ‘This is another serious, credible, and disturbing allegation against Brett Kavanaugh. It should be fully investigated.’ Another ‘serious, credible, and disturbing allegation,’ Kemo Sabe? Surely you mean ‘another baseless partisan smear against a man of sterling character whose politics you do not like’? That’s what it is all about, isn’t it? Destroy Brett Kavanaugh because 1) we hate Donald Trump and 2) we are terrified that Brett Kavanaugh would hamper the Democrats’ use of the Supreme Court as an instrument of ‘social justice.’ Chirped another factotum from the Democratic echo-chamber ‘These allegations seem credible, and we’re taking them very seriously. If established, they’re clearly disqualifying.’

Why the maniacal pile-on? As Powerline‘s John Hinderaker observes of Kavanaugh, “he is the most moderate nominee they are likely to see from the Trump administration. If his nomination fails, the president will most likely appoint Amy Barrett, who is secure against #MeToo allegations and is both more conservative and younger than Kavanaugh.” Hinderaker answers his own question:

Judge Kavanaugh’s pristine reputation is one reason why the Democrats have unleashed against him a smear campaign unparalleled in American history. This is the message they are trying to send: If we can do this to the Boy Scout Brett Kavanaugh, we can do it to anyone. Are you thinking of serving in a Republican administration? Or accepting an appointment to the federal judiciary from a Republican president? Think twice, and then think again.

Because our smear machine will reach back to middle school if necessary. If we can’t find any dirt on you, we will manufacture some. There is no depth to which we will not stoop, and your honesty, integrity and spotless reputation are no match for our control over the media and our determination to dredge up ridiculous allegations against anyone who stands in our way.

As gentle grilling as you might imagine, it nevertheless produced a damning report. Some nuggets from the document, which can be read in full here:

Dr. Ford’s description of the psychological impact of the event raises questions.

She maintains that she suffers from anxiety, claustrophobia, and post-traumatic stress disorder (PTSD). The date of the hearing was delayed because the Committee was informed that her symptoms prevent her from flying.

But she agreed during her testimony that she flies “fairly frequently for [her] hobbies and … work.”

She flies to the midAtlantic at least once a year to visit her family. She has flown to Hawaii, French Polynesia, and Costa Rica. She also flew to Washington, D.C. for the hearing.

Dr. Ford’s explanation of why she disclosed her allegations the way she did raises questions.

She claimed originally that she wished for her story to remain confidential, but the person operating the tipline at the Washington Post was the first person other than her therapist or husband to whom she disclosed the identity of her alleged attacker.

She testified that she had a “sense of urgency to relay the information to the Senate and the president.”

She did not contact the Senate, however, because she claims she “did not know how to do that.”

She does not explain why she knew how to contact her Congresswoman but not her Senator.

The full Senate vote on the Kavanaugh confirmation could come as early as Friday (US time), at which point Republicans may well heave a sigh that their candidate is over the line and the debacle is over. They shouldn’t celebrate that assumption too vigorously however — not in this era when facts are trumped by ideology and preconceptions and the need for evidence is b ut another patriarchal oppression of women who, as we are constantly told, must always be believed.

Carmen Get It! The PC Opera

First They Came for Victorians